Monumental heritage from Gakyojin, a Man “Crazy about drawing.” 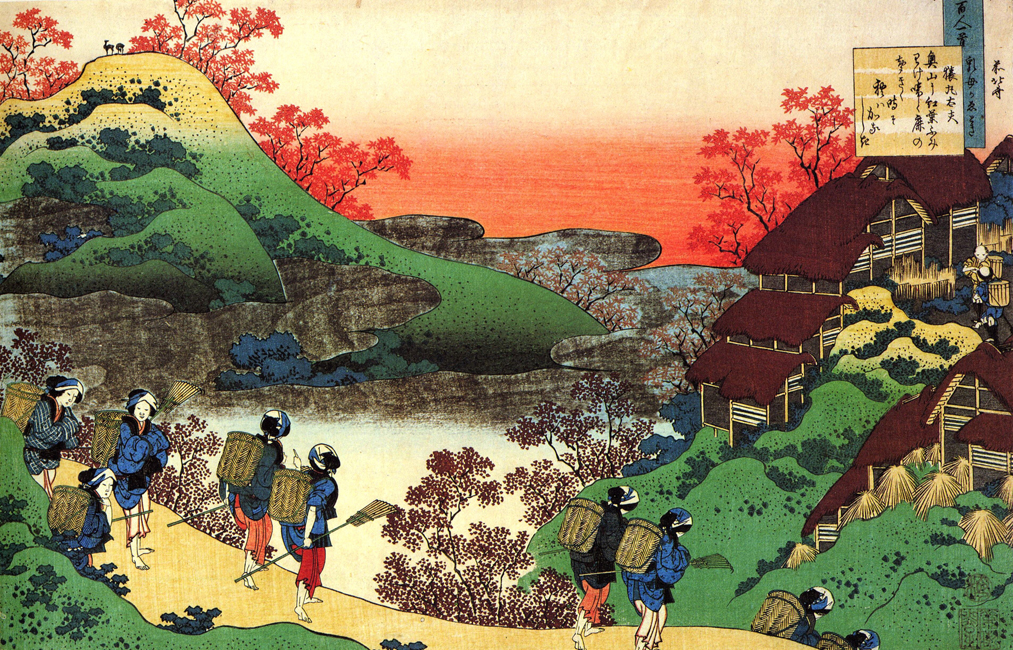 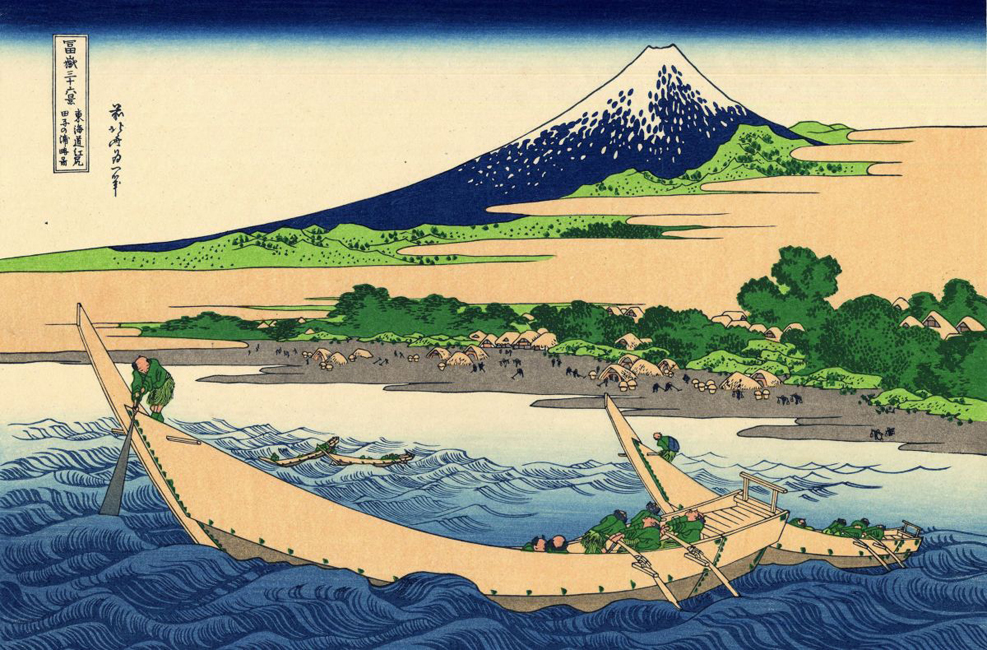 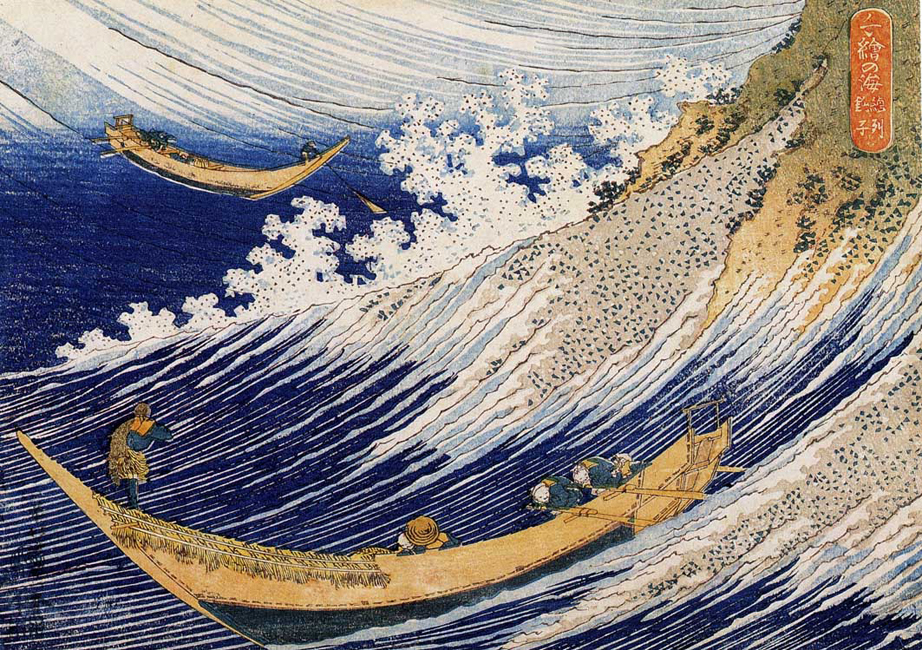 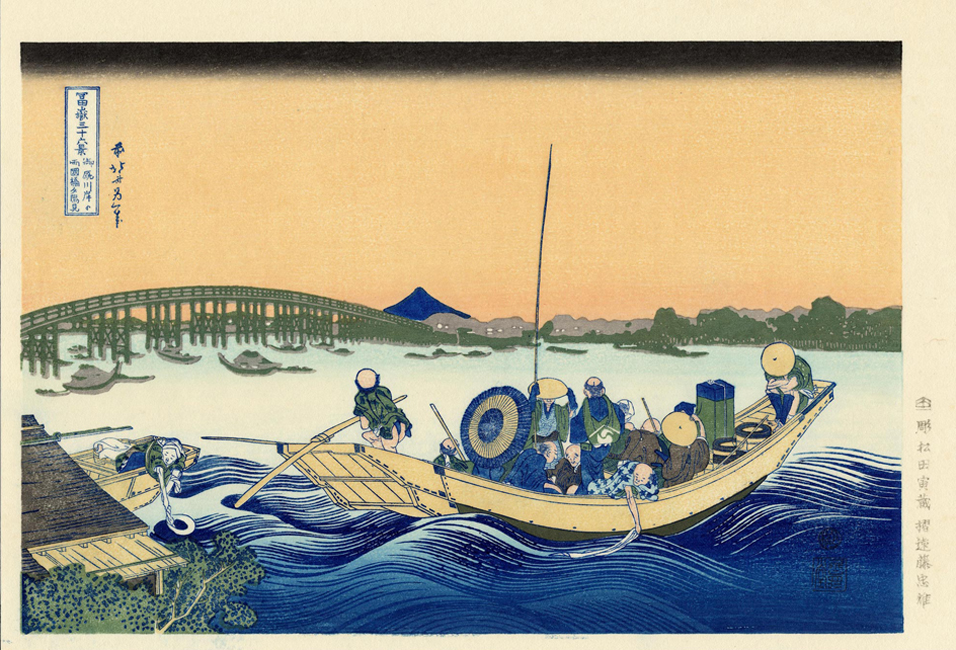 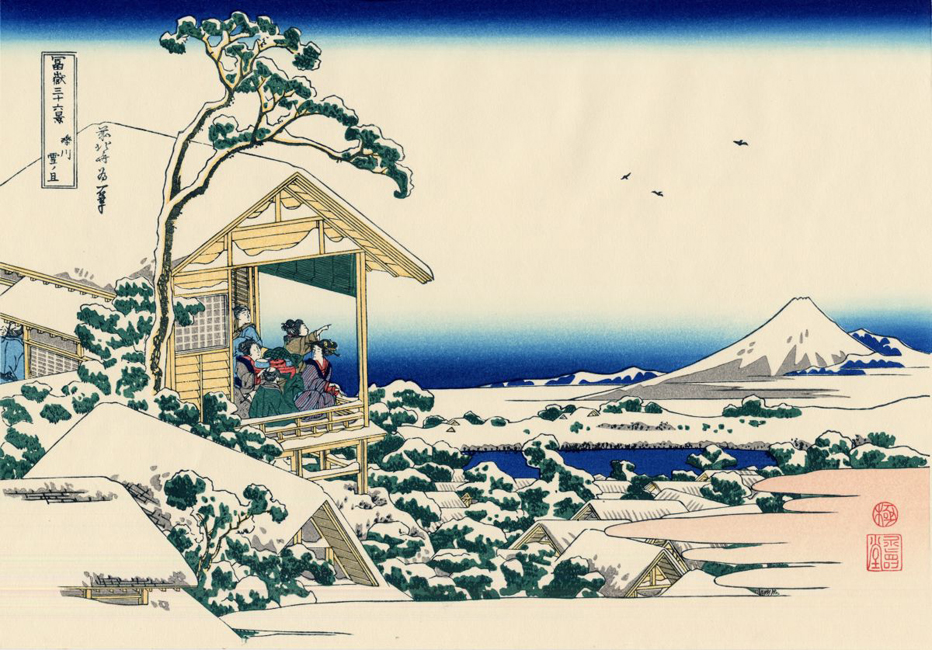 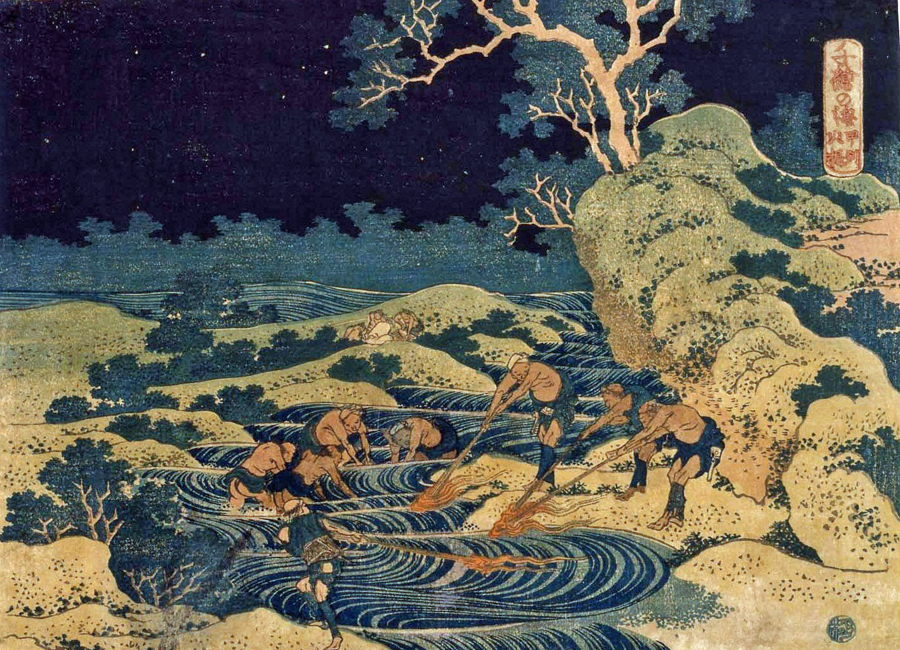 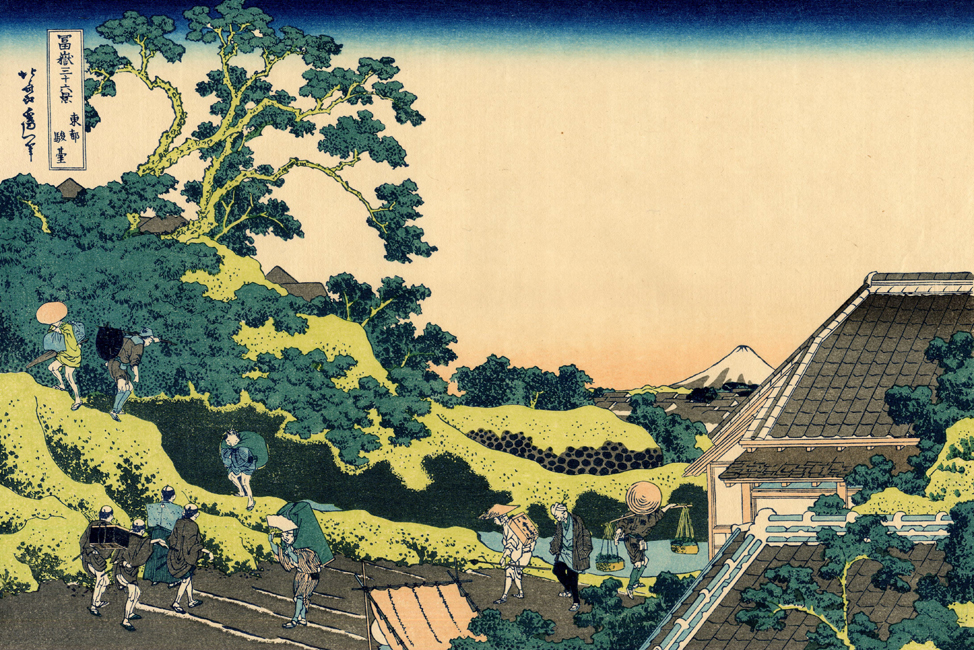 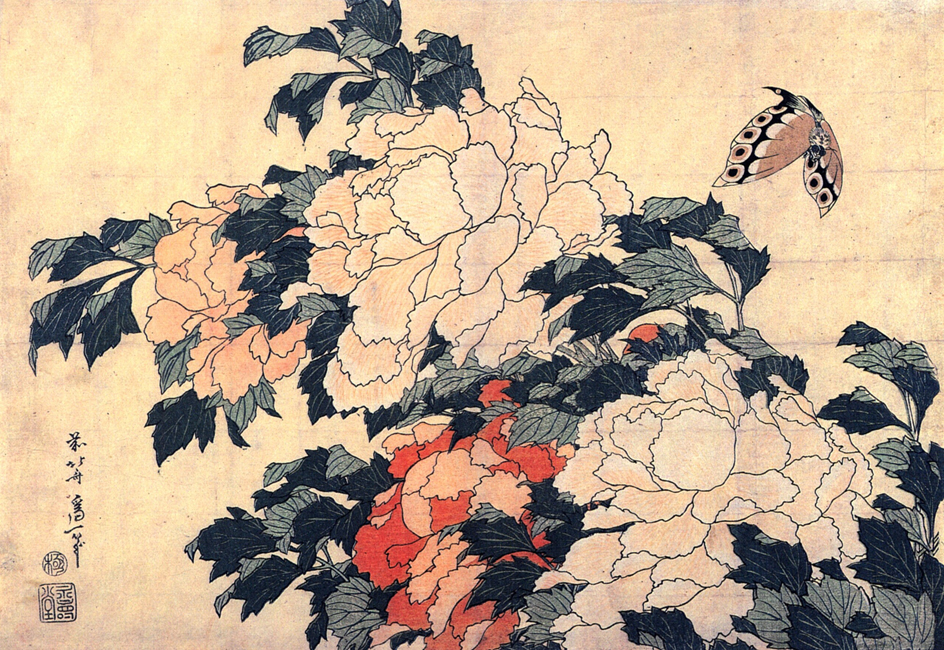 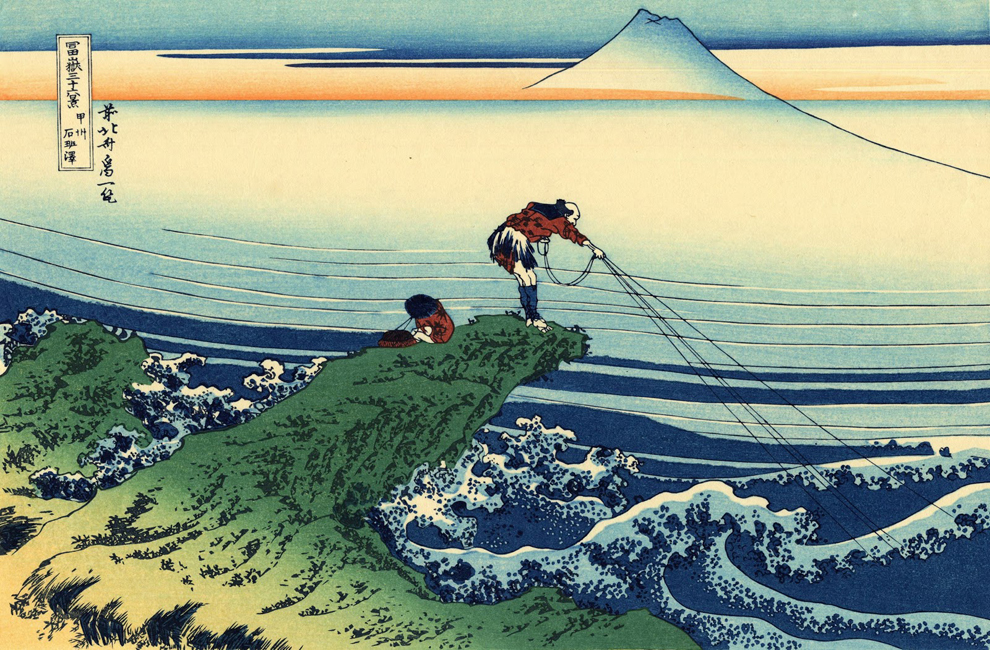 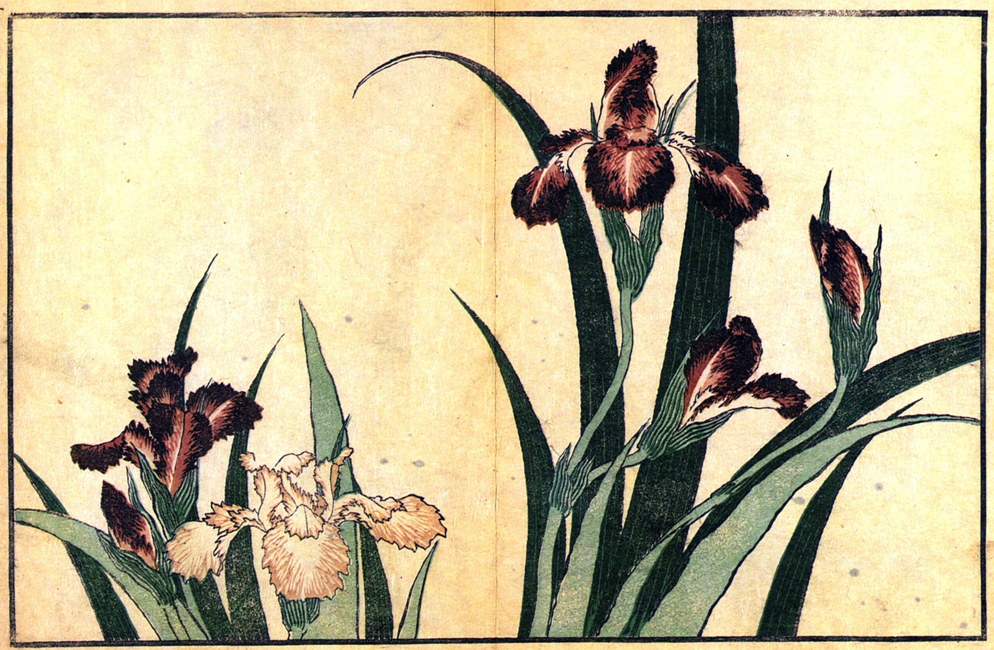 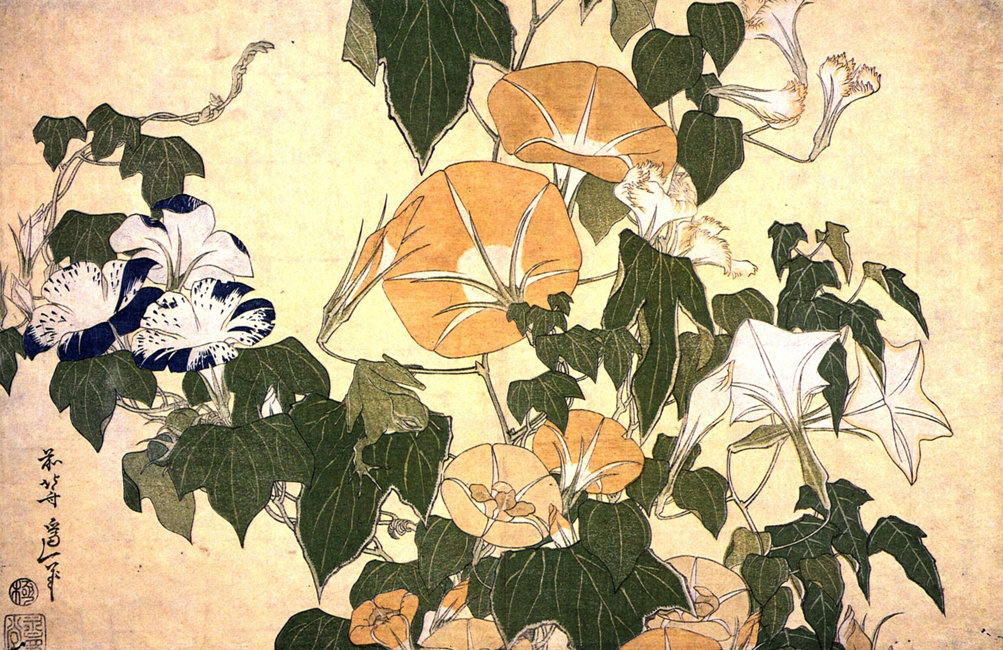 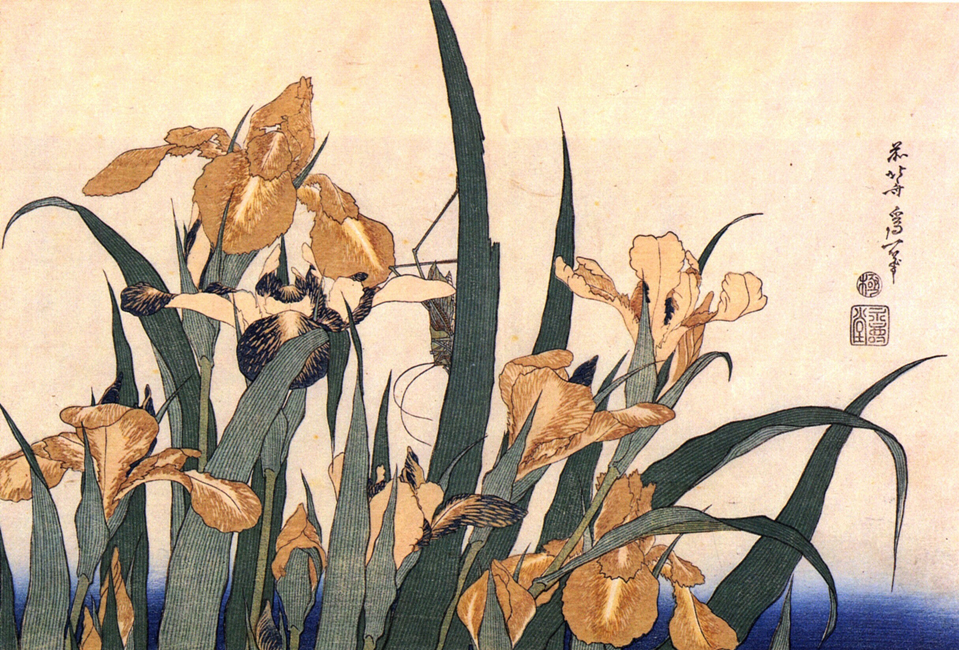 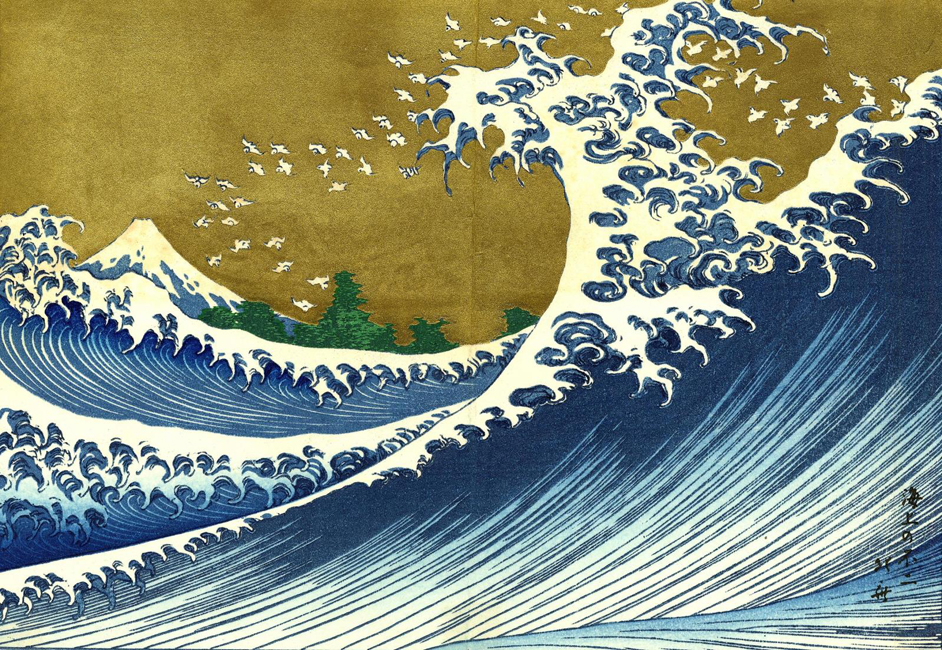 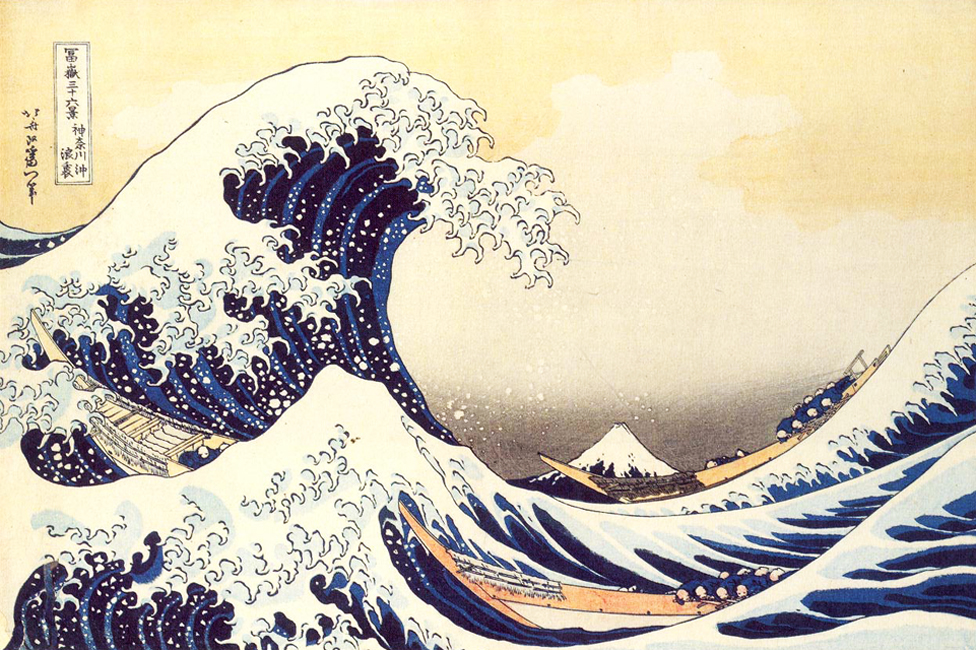 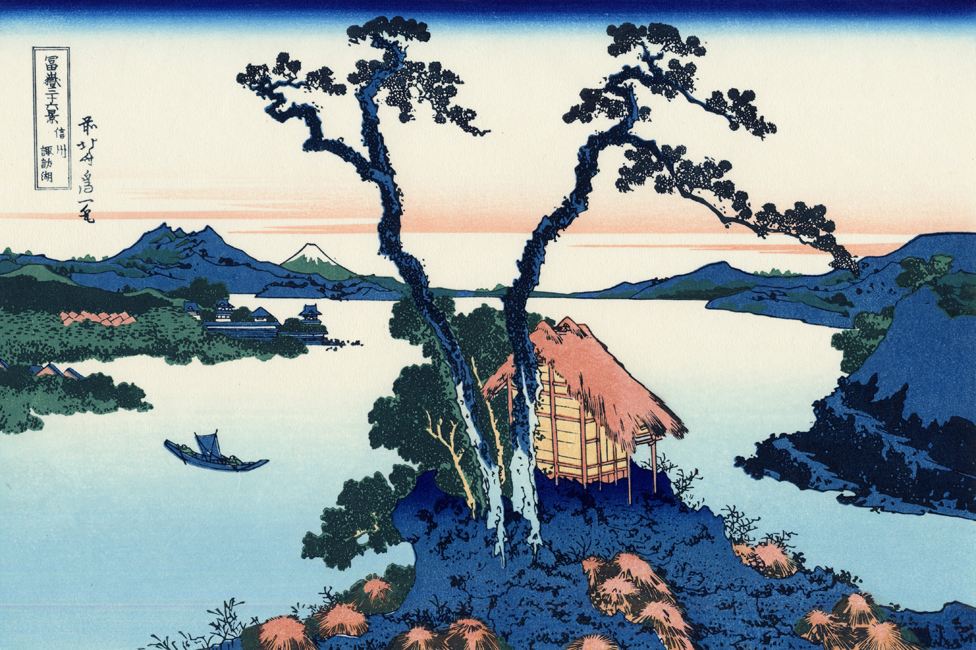 Self-called Gakyojin, “crazy about drawing”, Katsuhika Hokusai was gifted with an enormous work capacity, artistic curiosity and exceptional skills along seventy years of career. He left a monumental heritage, thousands of striking pieces, remarkable in their extraordinary variety: Ukiyo-e (Japanese printmaking), paintings, drawing, Kyoka ehon (illustrated books), didactic handbooks.
During these prolific active years, he handled all the traditional Japanese disciplines –  portraits of geishas, kabuki actors and sumo wrestlers, everyday life scenes, surimono (refined wishes cards), poems and novels illustrations. But it is after the publication of his landscapes series in the 1830’s, including the thirty views of Mount Fuji, that his practise of printmaking spread his fame in Japan and soon overseas.
Hokusai was born in 1760 in the Katsushika district of Edo (former Tokyo). As an orphan he was adopted at the age of 3 by a mirror manufacturer for the court of the Shogun(Japanese military ruler appointed by the Emperor). From that time he started developing early aptitudes for drawing. Sent at the age of twelve by his father to work in a bookstore, he began studying the images of illustrated books. At 14, he was employed by a wood-carver.

At 18 he was accepted into the studio of Katsukawa Shunsho, a famous Ukiyo-e  (Japanese wood block printmaking technique) portrait maker of Kabuki actors. During his training period, Hokusai completed courtesans and actors portraits as well as many Kibyoshi (popular illustrated novels).

Leaving the Katsukawa School in 1795, he began developing his own personal style, marked by chinese and western influences. Developing acquaintances with the cultural elite, he associated with the Tawaraya School, and at the death of its master, adopted his name “Tawaraya Sori”.  During this time, he published some egoyomi (calendars) andsurimono (brush paintings), made on New Year and aimed at being distributed among friends. He also developed illustrations for Kyoka ehon (illustrated books of humorous poems).

After passing his name “Sori” on to a pupil and leaving Tawaraya School, Hokusai established himself as an independent and renowned artist, attracting students of his own and often being imitated. It is during this time that he also adopted the name that he would be mostly know by, Katsushika Hokusai (“North Studio”), an hymn to the northern Buddhist divinity Myoken, incarnation of the Northern Star, whom he especially worships.

In 1811, Hokusai, changed his name to Taito, which refers to the cult of the stars, particularly Ursa Major. In 1814 he started publishing the ten first books of Hokusai Manga, a collection of sketches and caricatures that would later influence the modern form of comics.

In 1820, Hokusai changed his name again, this time for Litsu, (“aged one year older”), a premise to his most prolific years ever. Indeed, the 1820’s witnessed the peak of his career and secured his fame as an artist. At this time his activity was overwhelming, mastering the art of landscape, revealing nature ‘s majestic beauty. His most famous printmaking series – including Thirty-six Views of Mount Fuji, Unusual views of Celebrated Bridges in the provinces , A tour of the waterfalls of the provinces – countless pieces on flowers and birds date from this period.

1834 opened a new era for the painter who changed his name again, this time for “Gakyo Rojin Manji” (The Old Man Mad About Art). Between 1834 and 1840, Hokusai produced One Hundred Views of Mount Fuji, carefully printed in three volumes in delicates shades of grey. In 1839 a fire destroyed his house as well as all his equipment and much of his work. Around that time, his interest for printmaking vanished, replaced by a passion for painting. One of his latest famous work, “Ducks in a Stream” was completed at the age of eighty-seven.
He died in 1849 saying “If only heaven gave me another 10 years, I could become a better painter.”