Trained by Helmut Newton, the British, New York-based photographer had the perfect launchpad for a career in fashion photography. Instead, he creates non-commercial photographic series that revel in setting the medium free, using unconventional shooting and processing techniques to capture images that eschew concepts such as reality and fiction. 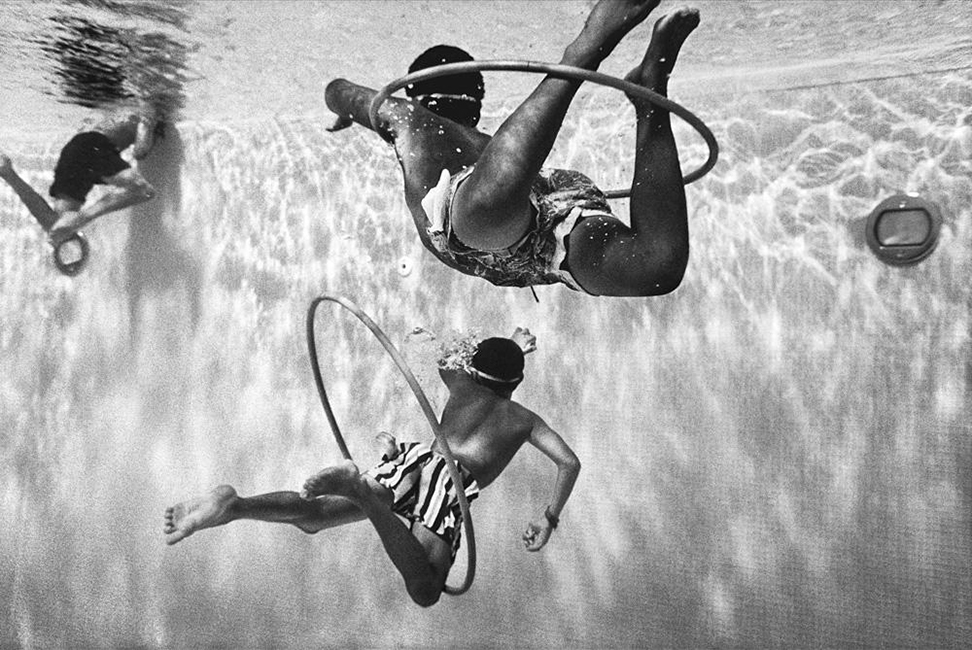 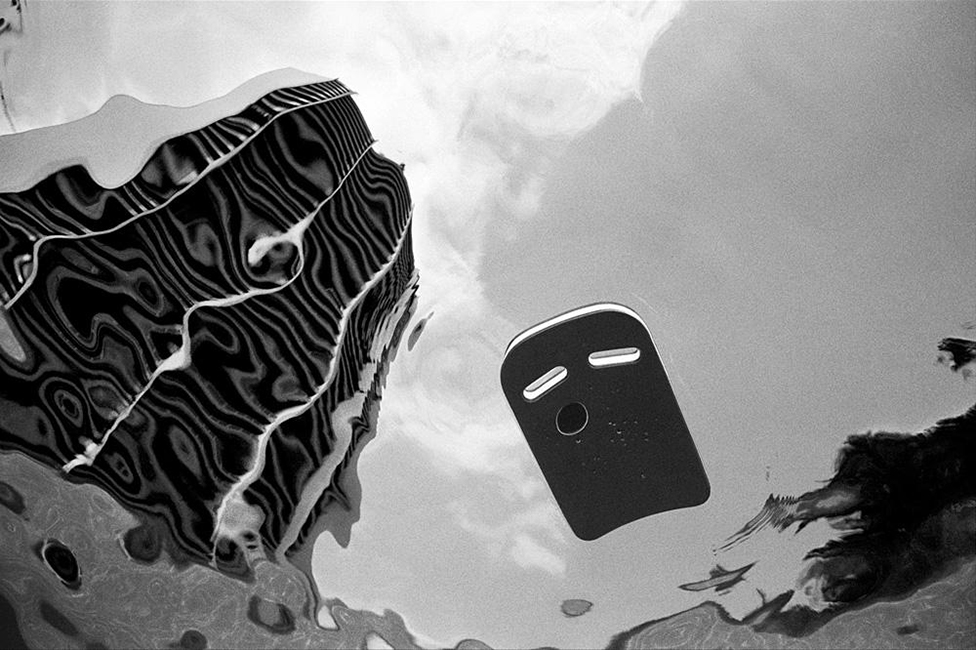 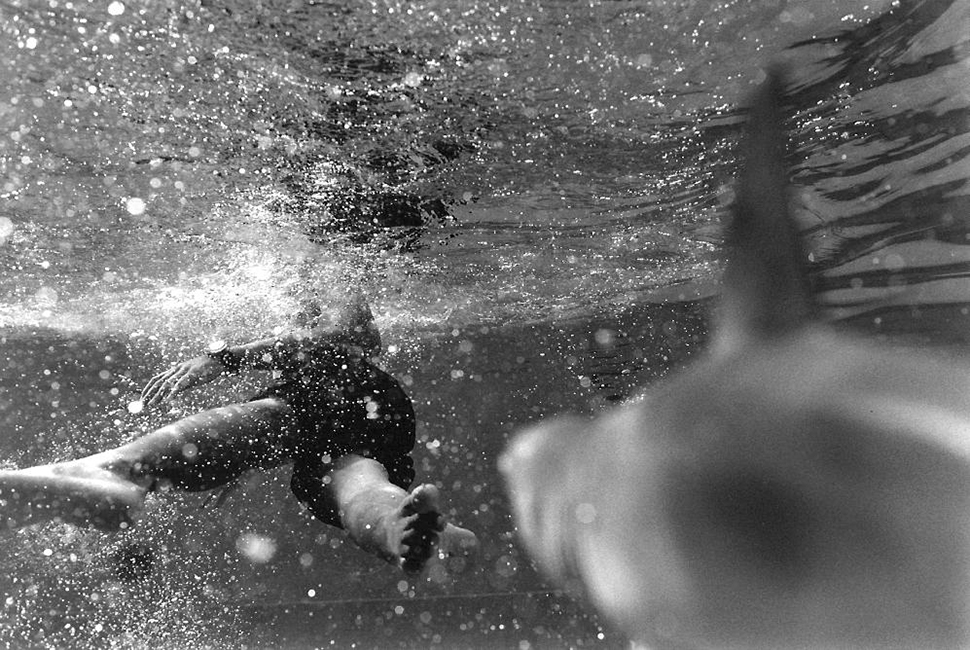 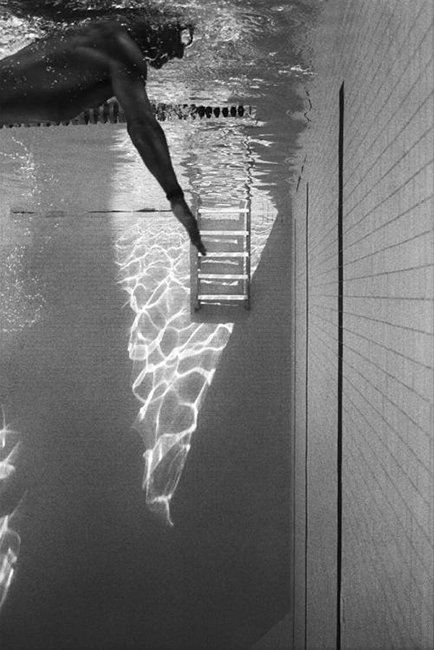 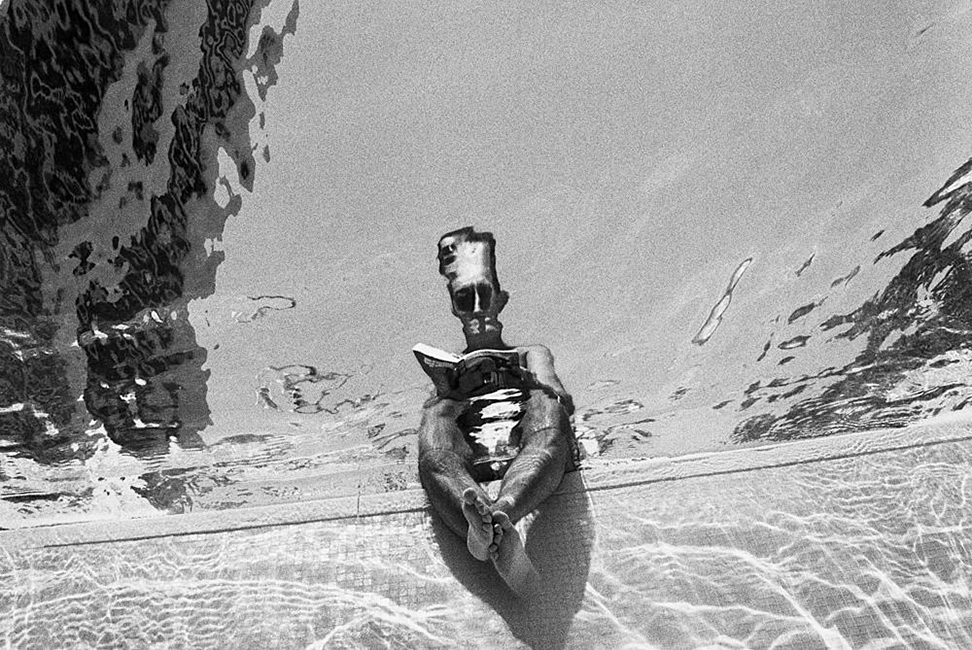 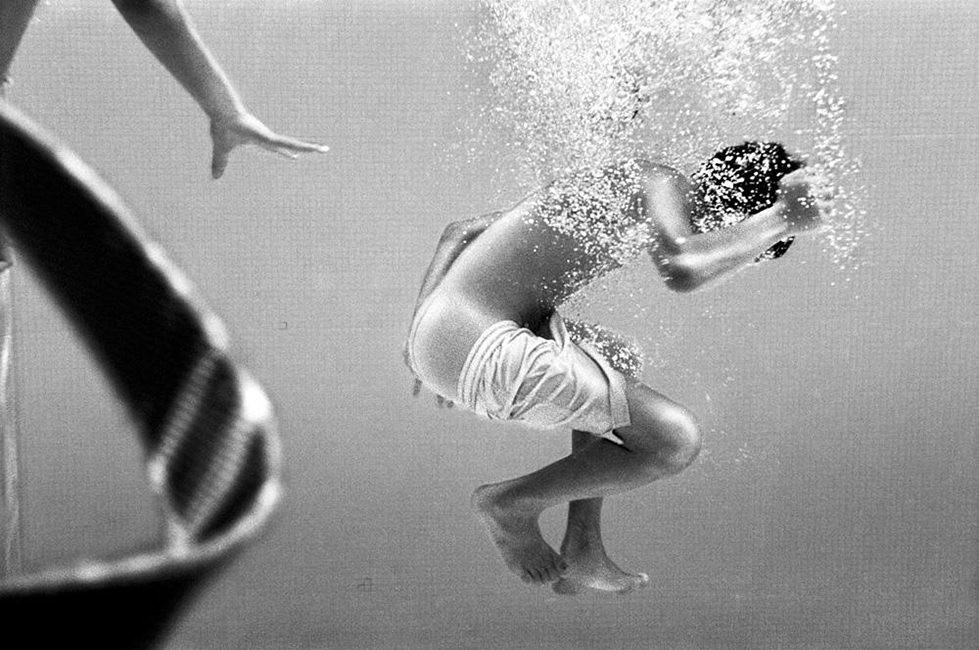 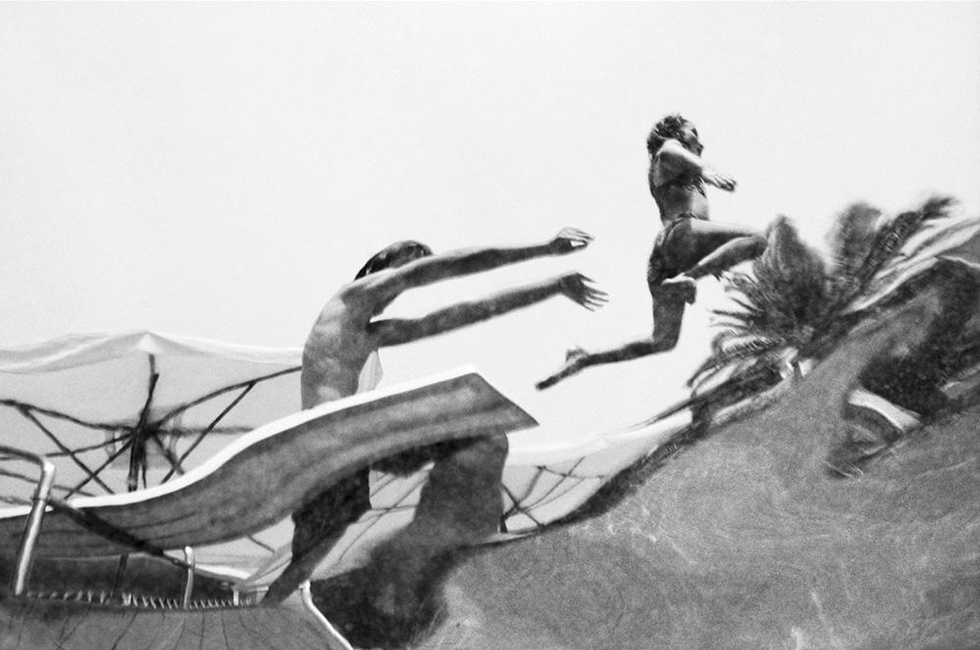 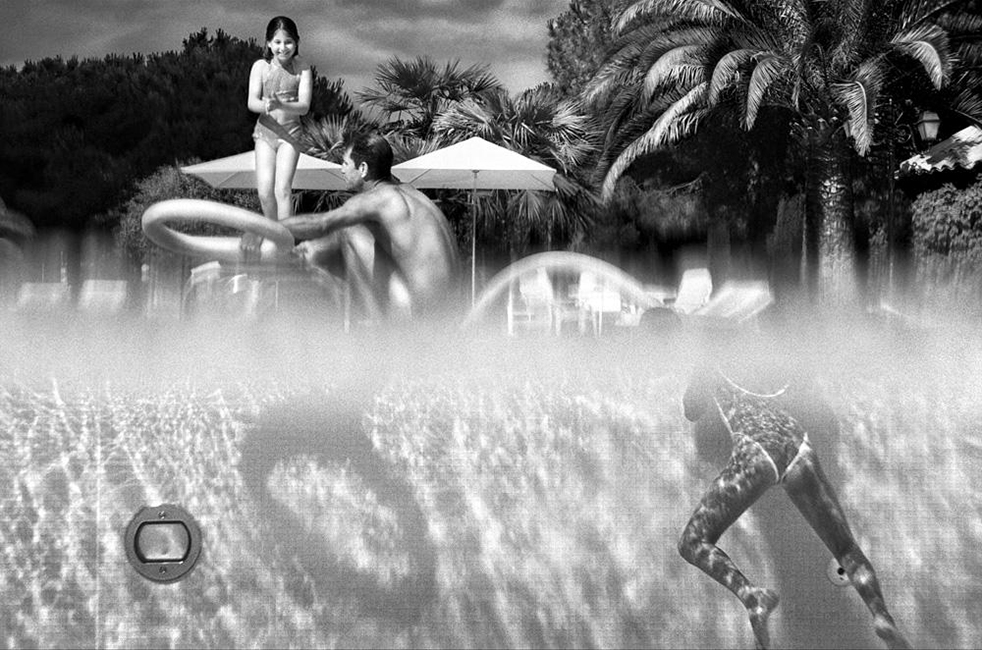 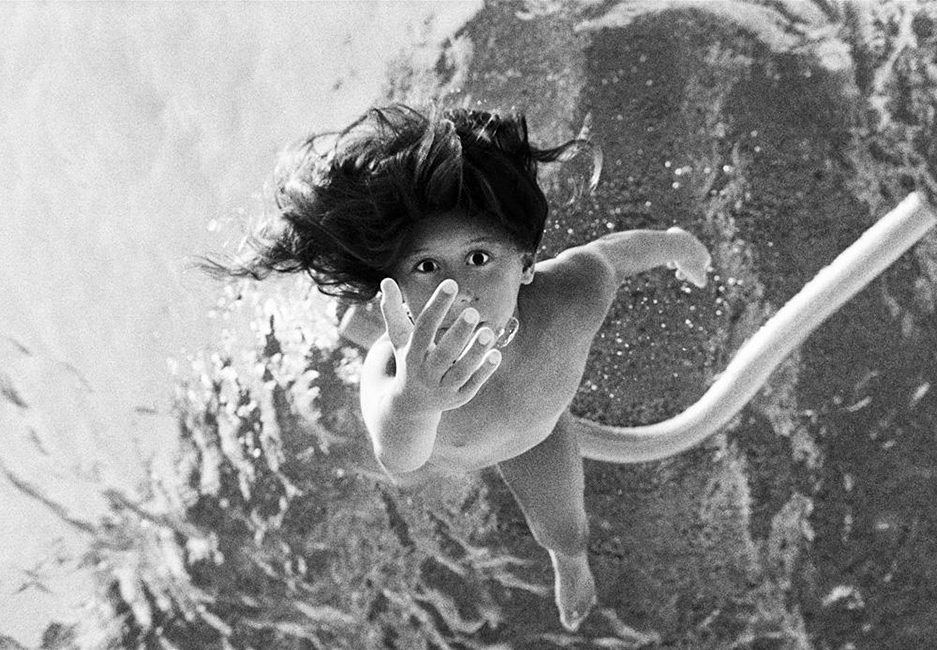 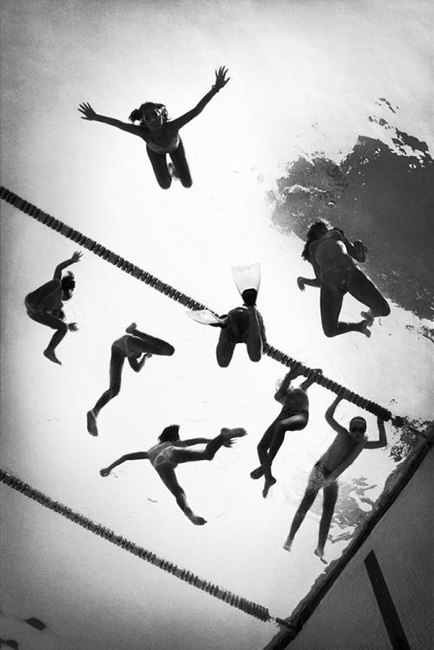 Would you say above that “photographer” is your occupation or are you a multi-tasker?
I think it’s more like the other way around; by definition one has to be a competent multi-tasker to be a good photographer.

To begin at the beginning: how did it all start, becoming a photographer? I read that you assisted Helmut Newton - did he have any sort of influence on you?  Any interesting anecdotes you want to share during this period? In light of this, why didn’t you go into fashion photography?
It really started with a naive letter that I sent to Helmut as a school boy in England when I was barely 17. I had very little education or experience in photography; nothing much more than an appetite or curiosity to learn that was perhaps first sparked by some documentary impulse to photograph my baby brother and sister for posterity. To my surprise, Helmut replied, offered me a opportunity to assist him in Monaco over my summer holiday and from there it evolved.

It was a huge influence, a real life experience that was utterly unique, and I can recall plenty of interesting anecdotes, however most are too colourful to print :). In terms of lasting influence on my work, I’m not so sure. Certainly to begin with, but then again at the time I was young and had no real grounding yet in the history of photography and art. Not to take anything away from fashion photography but at the time I thought photography + fashion was the highest aspiration. I hadn’t been exposed to much in photography beyond the pages of my mother’s Vogue and Harper’s Bazaar and the like until I landed in NY when I was 19.

To date, what have been your favourite jobs?
None, I have the luxury of not having to work commercially or taking assignments and “jobs” for others.

As an Englishman in New York. Do you feel like a legal alien or do you tend to easily feel at home elsewhere?
New York is a city populated by aliens, legal, illegal, human and perhaps otherwise. I don’t know of another place where practically any whim can be so immediately satisfied, the energy of the city can be addictive. This is of course both a blessing and ultimately a curse - it’s easy to become spoilt after living in New York. I arrived in NY as a student at Parsons School of Design and it was the perfect place to be, to learn and be immersed in photography and art. I started my R.S.V.P. project in New York and for that kind of photography it was the perfect incubator. Photographing in an iconic city like NY can, however, in the same way that any instantly recognisable place would, cast an inescapable shadow over one's work. As my work becomes more experimental, more about the medium of photography itself, I find myself drawn away more and more for the purposes of making new work but always pulled back to NY for most everything else.

Can you talk about the project R. S.V. P, was it an experience of being an "aesthetic paparazzi"?
I suppose an alternative title could’ve easily have been Adventures in Party Crashing. Initially there was certainly an element of using my camera as a sort of cover so to speak, exploring social rituals and infiltrating the milieu of high society within the confines of formal parties and events. It was exciting and started off as something of an exercise in counteracting my inmate inhibitions - dressing up in black-tie, getting into places without an invitation, being where I wasn’t meant to be. Hiding my camera and working as stealthily as possible, high-speed film and no flash...I felt like an only slightly more modern incarnation of the German photographer Erich Salomon who penetrated the inner sanctums of European political and diplomatic events in the 1920s and 30s.

A few observations soon crystallised and guided the project. Grand residences, ballrooms, castles and private clubs around the world all typically display the same gilded, European-infused classical architecture and so geographically or culturally speaking there was little sense of place. A event in New York would look indistinguishable from another in Paris. No matter how luxurious the clothes, everyone is essentially reduced to wearing a uniform - men, women, guests and the help alike. Body language was the only true distinguishing factor and so I pursued the project photographing in numerous cities in over 15 countries around the world to explore the correlation of how, for example, an Italian gentleman in Milan might contrast with an Englishman in London.

How about The Deep End? How did that come about? Moreover, I would like to know: did it involve a specific camera and special technique of holding one's breath? What's the message behind the image?
After so long dressing up to take photographs for R.S.V.P. it was an appealing idea to dress down for a change, to take a camera into new places it wasn’t meant to be and photograph another foreign world of sorts - underwater in public swimming pools teeming with life during the height of the Mediterranean summer. Like most of my projects, it starts was a moment of insight or recognition of the potential for an intriguing photograph or project, then it’s simply a question of identifying the right tool. In this case it was a Nikonos waterproof camera, small enough to obscure from observant eyes but capable enough to do the job.

The demands on my lungs were by far the most demanding, swimming underwater and holding position long enough for the moment to present itself. I was drawn to that tangible sense of suspension, distortion and refraction of light, and above all that evocative mix of escapism and fantasy so manifest in the warm waters of a swimming pool. The pool provides a place of temporary detachment from life’s everyday routine. People seem liberated and at once removed from any social reference as they float, dive, sink or swim through the water. In working in black-and-white, one's recognition that these pictures are taken underwater is momentarily delayed and underscores the abstract sense of gravity, movement and time that permeates through the series.

Do you want to introduce your new project Black Powder? It looks a bit more “evolved” and more abstract than your other photo series.
Yes, it’s quite an evolution - some might say a leap! For the last five years or so I’ve been working in a very different vein that started with my ongoing Black Powder series. It’s been 170 years since William Henry Fox Talbot pioneered the photographic negative, and the overwhelming majority of people who pick up a camera today, and practically everyone who takes a picture for the first time, does so with a digital camera - the negative as an integral part of the photographic process has practically disappeared.

Working with large-format film cameras I’ve been making photographs that reflect on the nature and form of photography through the typically clichéd subject of fireworks and grand pyrotechnic events around the world. My selective ‘recordings’ of these fireworks are made entirely in-camera by employing extended exposures, multiple sequential exposures or a mix of both, in tandem with simple yet unorthodox combinations of aperture, focus and shutter-speed that sculpt and multiply the fiery projectiles onto a single sheet of film. The final print is instead printed as a facsimile enlargement of the original negative rather than its positive, which reads more like a highly detailed graphite or charcoal drawing…as if they’re fashioned from ‘black powder’ themselves.

For you, is taking photos to show as much reality as possible, or is it a way to create a fictional story?
Neither, I’m not particularly interested in representing “reality" or narrative, I’m much more interested in how something looks like as a photograph. Painting was essentially set free from its utilitarian function of trying to acurately represent the world when photography came along and did a far better job of it. Far from being the death of painting, it was set free. The same can be said of photography now that the prevalence of digital tools has upended any notion of the photograph as reality or truth. Photography needn’t be shackled to any utilitarian constraints and is therefore free to break the rules, to experiment with itself - conceptually and through process and engage in dialogue with other modes of art-making such as painting and drawing.

It’s important in my work to always reference the intrinsic properties of the photographic medium, whilst not being afraid to transcend the boundaries of what we expect a traditional photograph to look like. Ultimately I’m trying to make images that are both challenging and unexpected - but encapsulate something of the alchemic nature that is at the essence of photography.

What's your next project?
I’m working on a number of series in parallel, turning my lens on very different subjects but which are all conceptually a broad evolution of the themes within Black Powder. The overarching narrative at the heart of my practice today involves experiments in mark-making, quite literally painting with light. I’m continually interested in the negative image and how it provides a canvas of sorts for the symbiotic relationship between the idea of mark-making, employing very long exposures, and one of the principal underlying concerns in photography: namely, time. It’s every bit as beautiful and it is surprising.