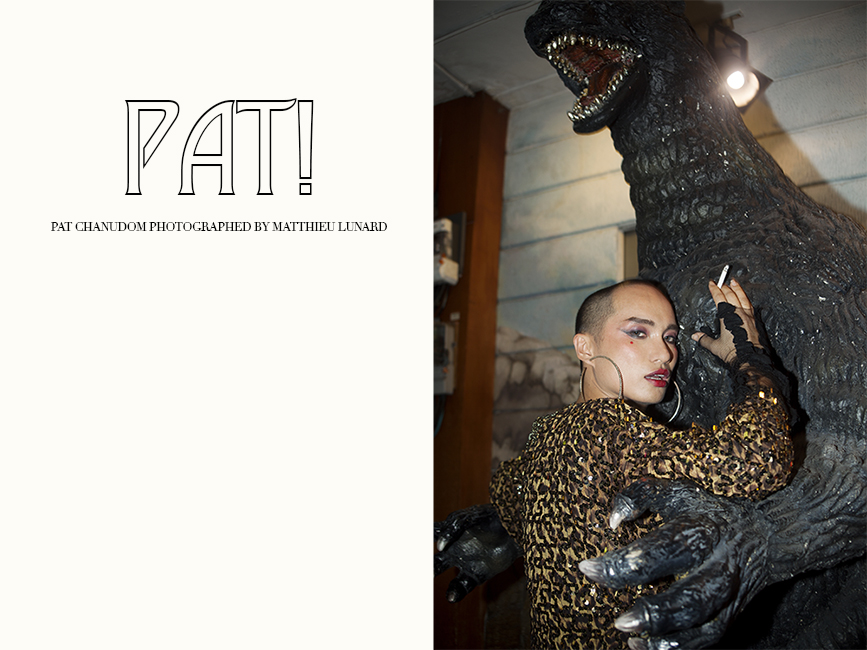 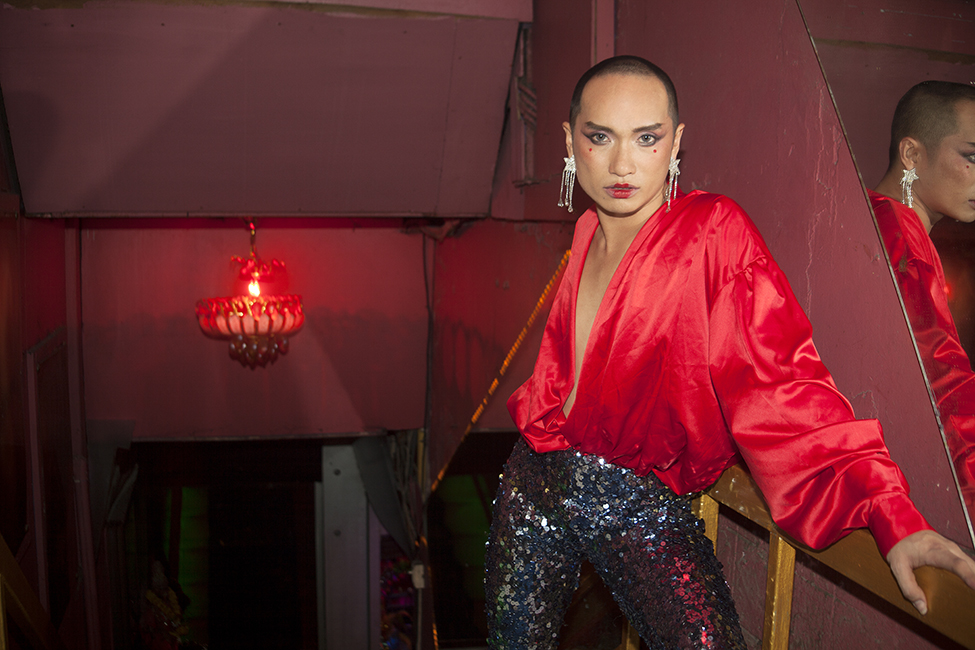 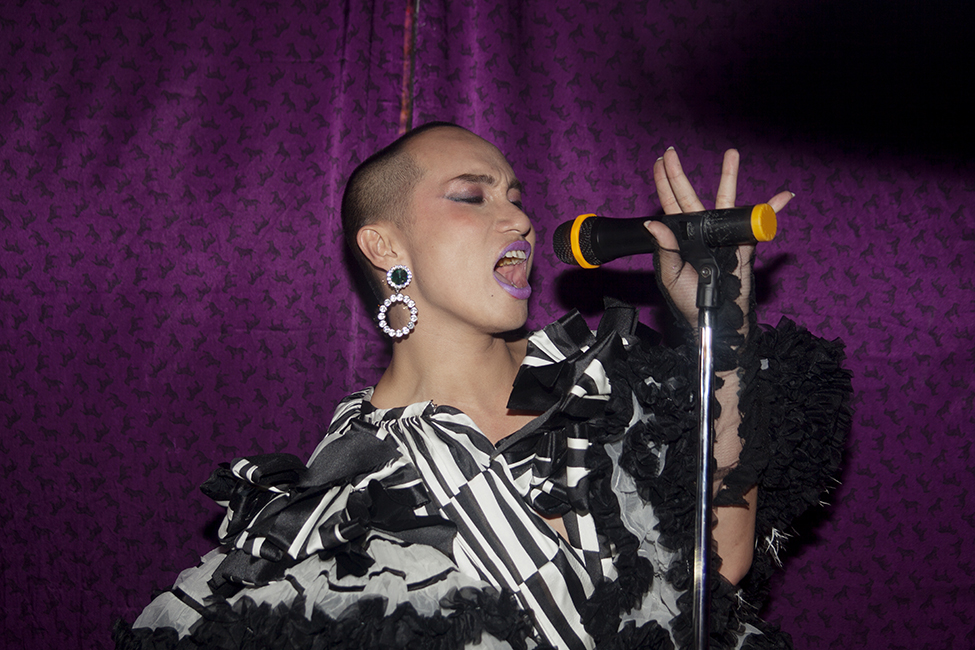 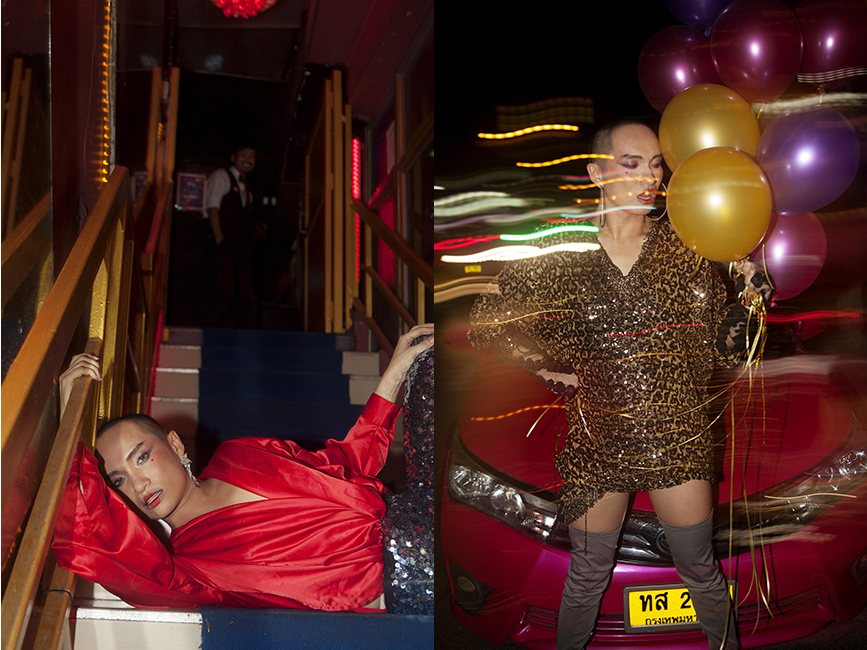 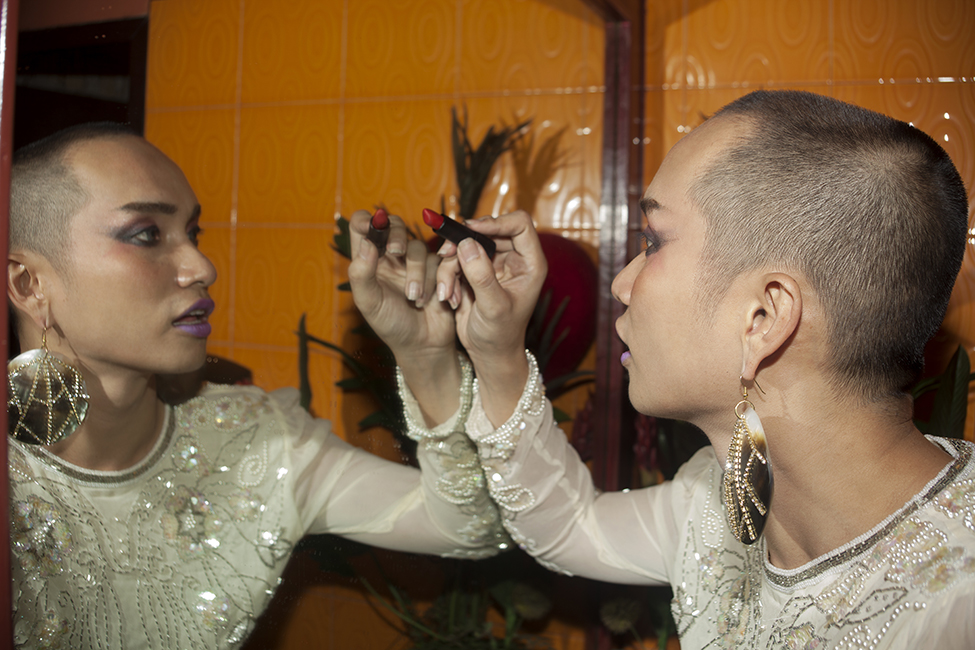 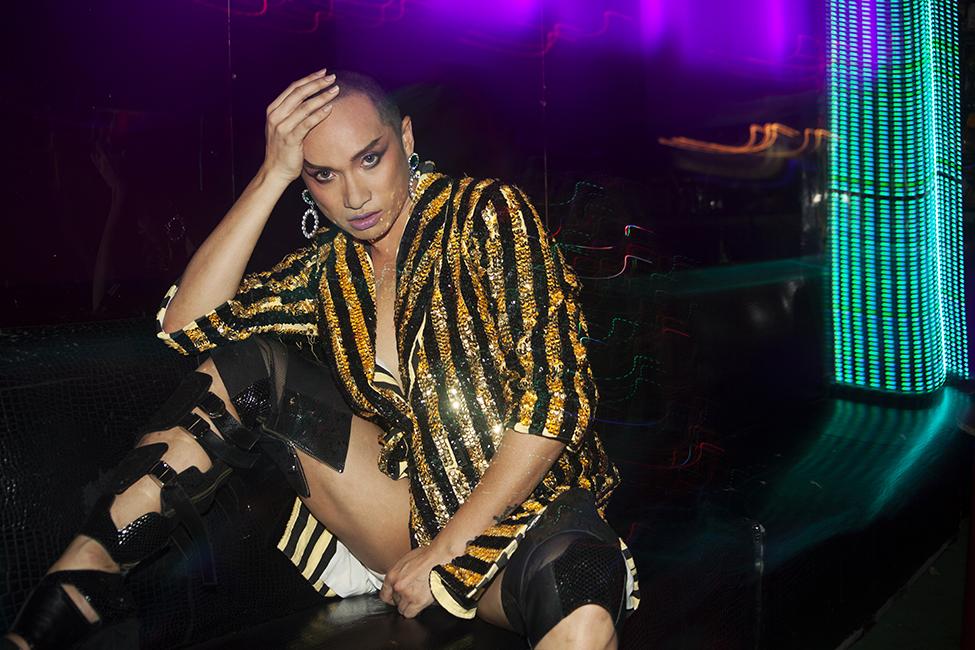 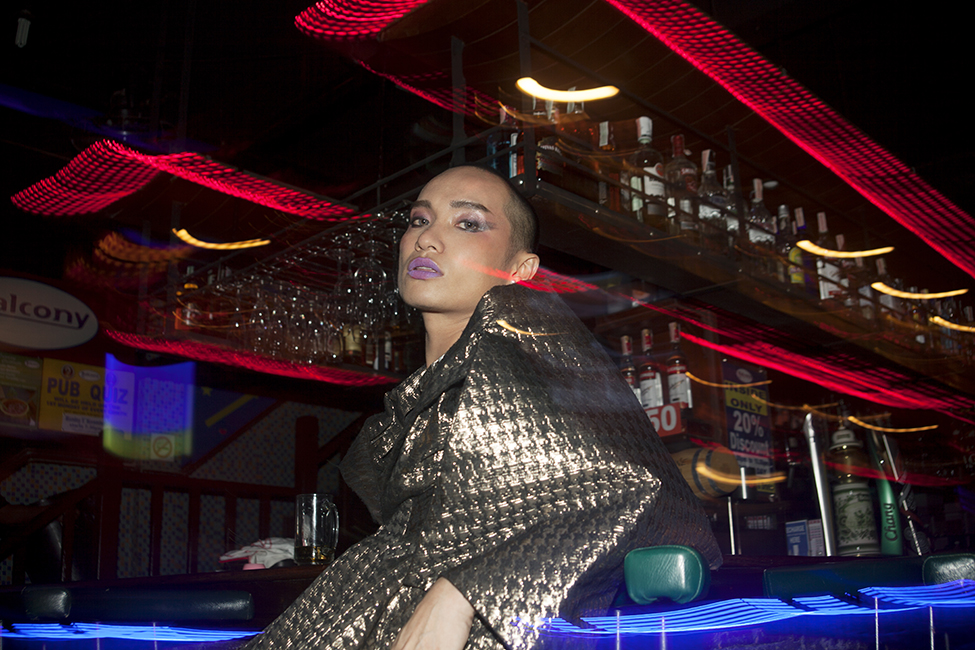 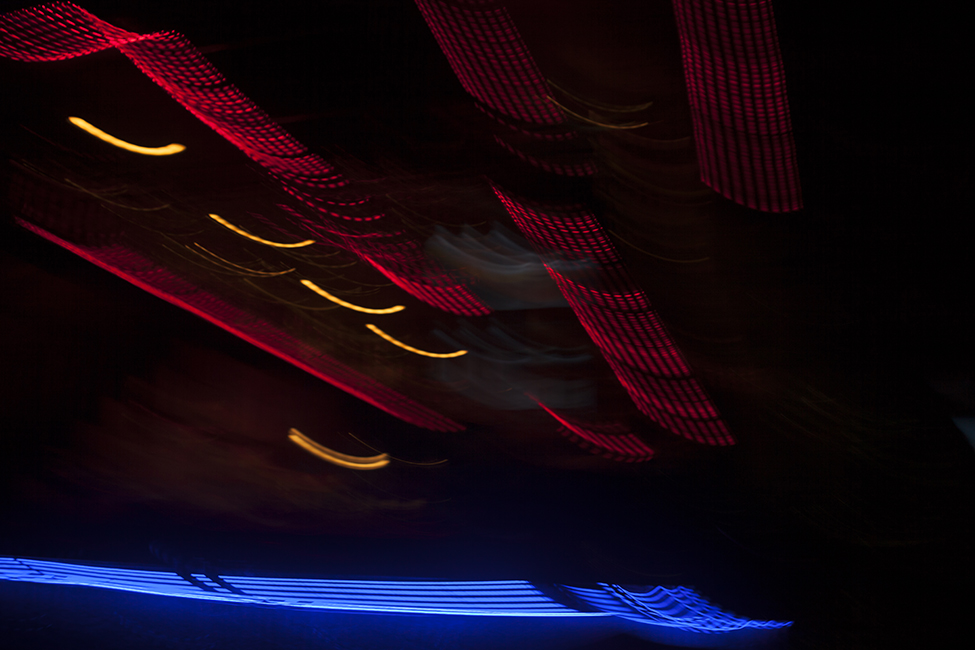 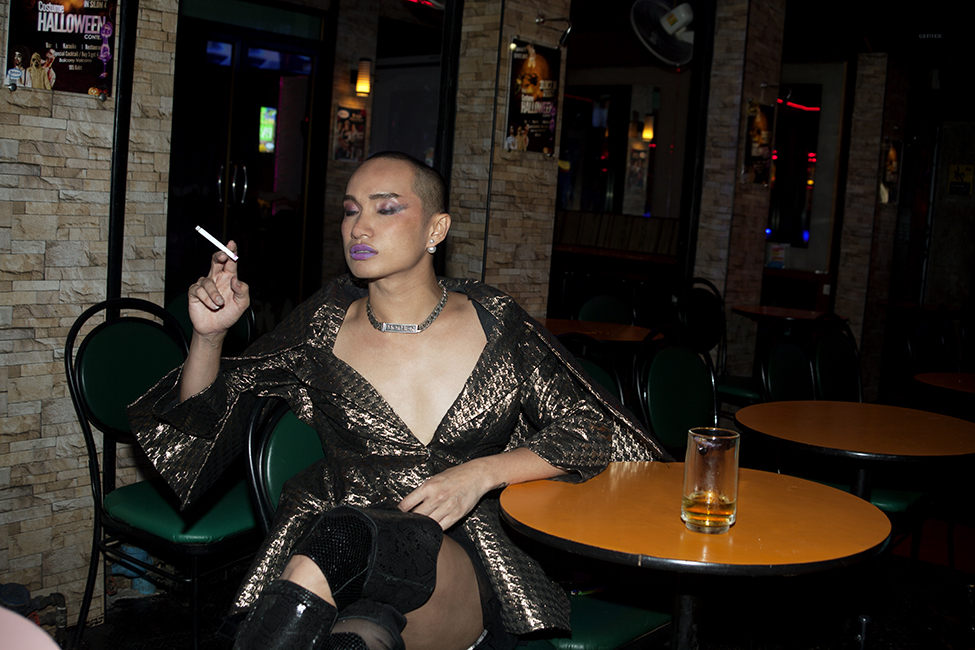 XK: What is your name? Can you tell us about your profession?

PC: My name is Pat, I am an actor and singer, I have a rock band called “CHANUDOM”
I was born in Trat in the East of Thailand. I grew up there, but after university moved to Bangkok.
XK: How would you describe the musical side of yourself?

PC: I would say my musical inspiration is Theatrical Rock, a kind of glam rock, with all the outfits and stage play. My favorite Thai artist is a country singer Poompaung, the Queen of Country in Thailand. She died around 20 years ago but she is a legend here, everyone knows her. I grew up listening to her and seeing her on TV. She was the artist that made me want become performer. Also, every time my parents had a party, they would call me and say “Pat on stage!”. They loved having friends in our home and hosting music and dance parties. That made me confident about myself and my skills on stage.

As for Western music I adore Amy Winehouse. I love her soul, her story moves me and I relate to her lyrics, especially the melancholic side. I get very inspired when I am melancholic. I think of myself as double sided, one creative part is very quiet and melancholic, and on stage there is a part which is fabulous and eccentric and very outgoing for my audience. My style and make up are inspired by the environment I grew up in, like the very colorful nature around where I lived. Right now I am more into a seventies influenced time, but I often change following the mood of the moment

XK: Sexual identity seems to be central to your performances. What do you try to convey through your work about your identity?

PC: I believe that everybody is human, all genders should be respected. I look like a woman, I sometimes dance like a man and my voice screams like a man. Both sexes are beautiful, dancing like a man and dressing like woman is a beautiful mix, merging, being human without an imposed sexual identity.
Growing up I loved to dress up as a girl but also play like a boy. I loved football and sport in general. I have never been bullied because I taught people to respect me. I hung out both with guys and girls. I started wearing makeup at 6 for fun. It was during times as a student that I started wearing makeup outside casually. But sometimes wearing boys clothes with girls make up, generally mixing both genders style, combined into my own style.

XK: How does your personality differ on and off stage?

PC: I invented a character on stage but it has a lot of similarities with the real me. Of course, I don’t wear sequins and pearls every day. I don’t shine all the time, sometimes I dress up casually.

XK: Who influenced you artistically to pursue music as a career?

PC: My first album that I released in 2018, there were only Thai songs which I wrote all the music and lyrics, 12 in total. On stage I sometimes do covers of English songs, like Tina Turner’s Proud Mary, Only Love Can Hurt Like This by Paloma Faith, Champagne Supernova’s Oasis. This year I was invited in America to “South by Southwest” (SXSW) festival, the third biggest American festival in Austin, Texas. It was the first stage for Amy Winehouse and John Mayer. The SXSW team selected three bands from Thailand and the director loved our style and invited me to sing some songs from my album in Thai. Now I want to grow internationally in the music industry using the English language, but with my own special accent, I am working on my second EP, 5 songs in English. It will be a rock album.

XK: In the West, Thailand is generally thought of as being quite accepting to more fluid conceptions of gender. Do you think this is a fair generalization?

PC: I think nowadays it’s okay for me. Not being accepted by certain people makes me angry, especially when I was confronted to it in Thailand. I did some rock concerts and the males in the crowd had a hard time accepting a genderfluid person could be on stage. They are just ignorant of real rock culture where stage play is common, for example, Mick Jagger playing with his feminine side or David Bowie. But after the show they come to tell me they were impressed after all and they changed their mind. I am happy to contribute to more acceptance.

XK: What, in your opinion, needs to be improved in Thai society in regards to transgender acceptance?

PC: Nowadays Thailand is becoming better in terms of acceptance but I can’t speak for the others, it might be hard for other people. For me it has always been easy, my parents supported me the whole time. I remember the first gift my dad gave me when I was 6 was a dress, as my mom gave me a football.

XK: You were in a play called ‘La Cage aux Folles’, a very famous French play that was turned into a film in the 80’s. Could you talk a little bit about your role in this play? And your method in acting?

PC: I studied performing arts in Bangkok university. Theatre class, acting class, singing, dancing and everything about performance. I studied for 4 years and got my master’s degree. The team that taught in university were preparing the play and they asked me if I wanted to be part of it. I had never seen the film before but after I got cast I was randomly watching cable tv one day and there it was! I realized the story was the same as the script I had read, and it was the film! I love the character Albin because despite her diva attitude she has a good heart, and she genuinely loves the son of her partner like it was hers. I had a great time because I rehearsed with my university teachers, like a reunion.

XK: You seem to be very comfortable in front of the camera. Did you have some tips on cultivating confidence?

PC: When you love what you do and you know that it’s what you want to do, you deserve it! You should reflect on what you love and give your heart to it. I don’t really suffer from nervousness even when I was on stage, sometimes I would forget my lines but I would improvise, it was not a problem for me.

XK: And lastly, where do you see yourself in the future? What is your next career move? Are you in search of celebrity status?

PC: Right now am working as a producer for a talk show that I will also be hosting. It’s a TV show on national TV focused on interviewing Thai celebrities, also we will have live music.
I want to be successful as a singer, but also behind the scene. I like to direct and produce and be a stage director for TV but also theatre.