Listen to singer and actor Pae Arak talk to Aserica in Bangkok to find out more about his childhood memories, personal style and how fame affected his social life. 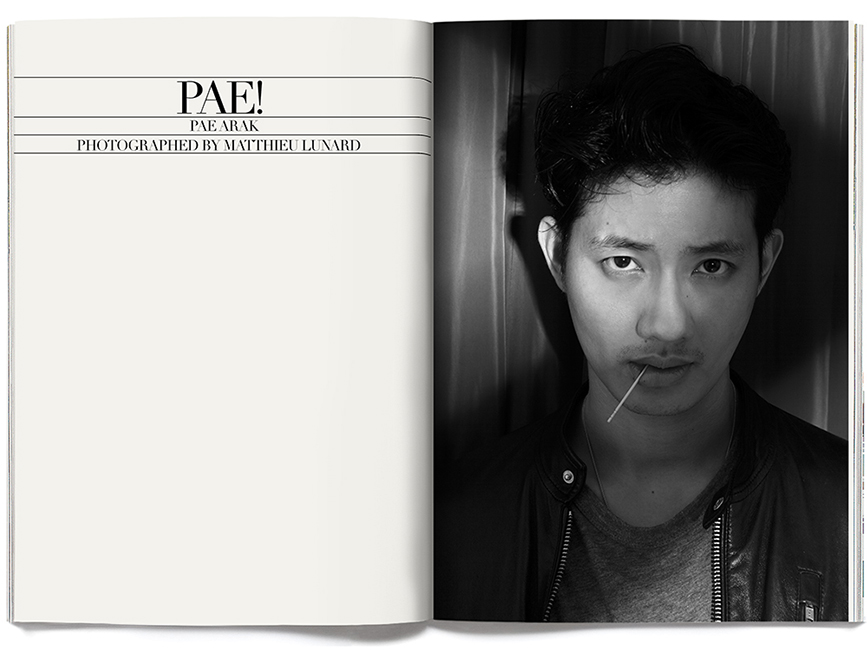 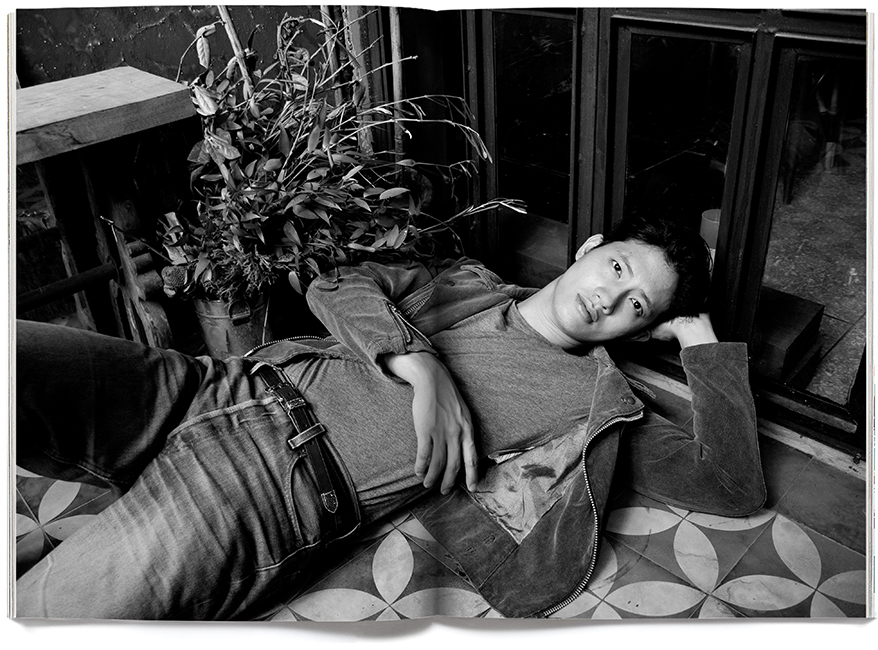 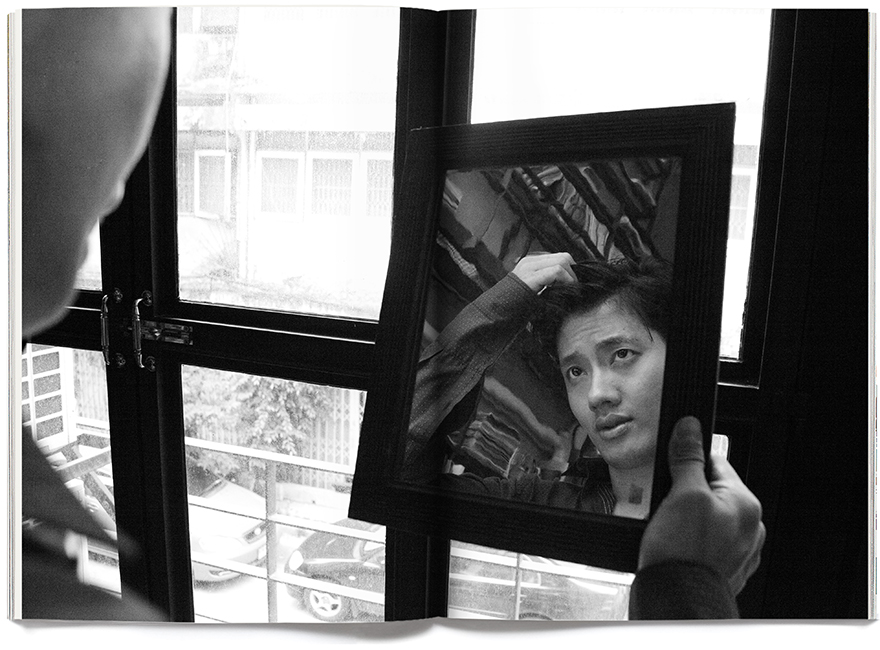 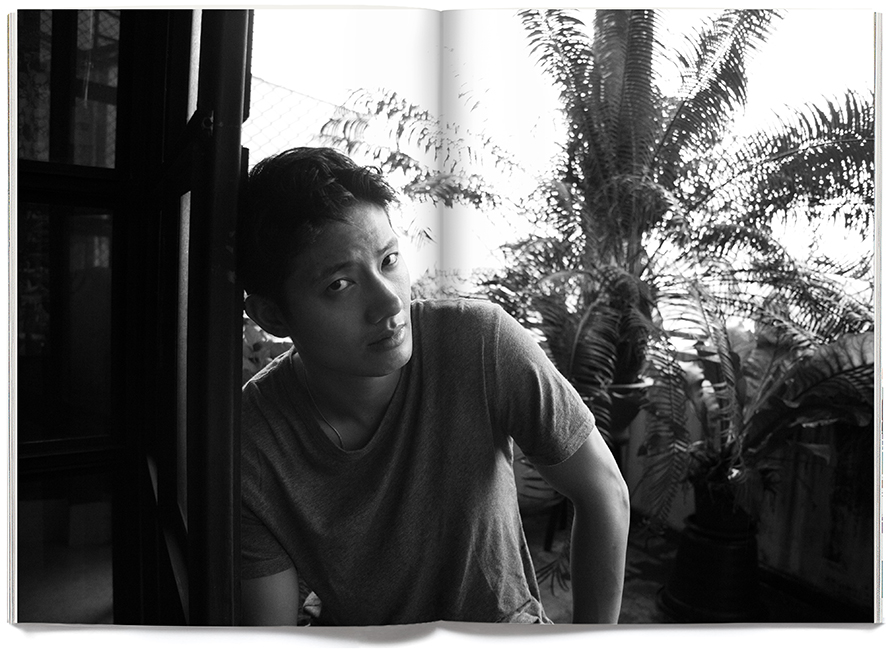 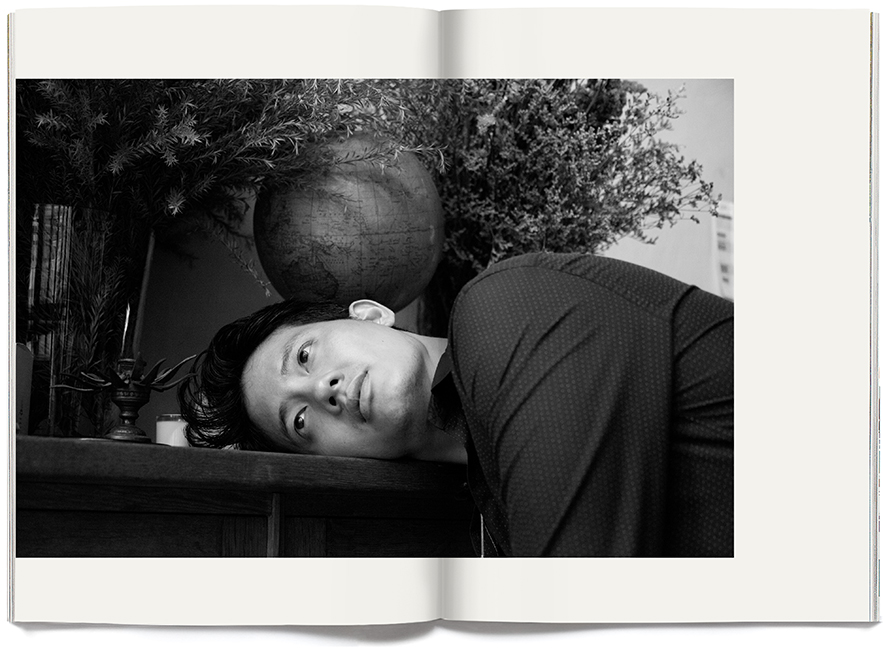 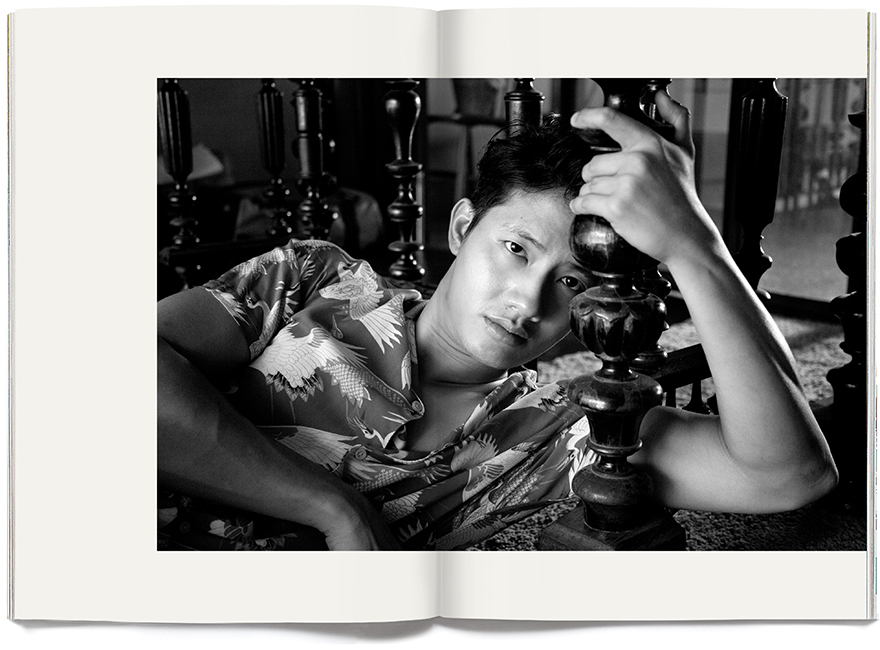 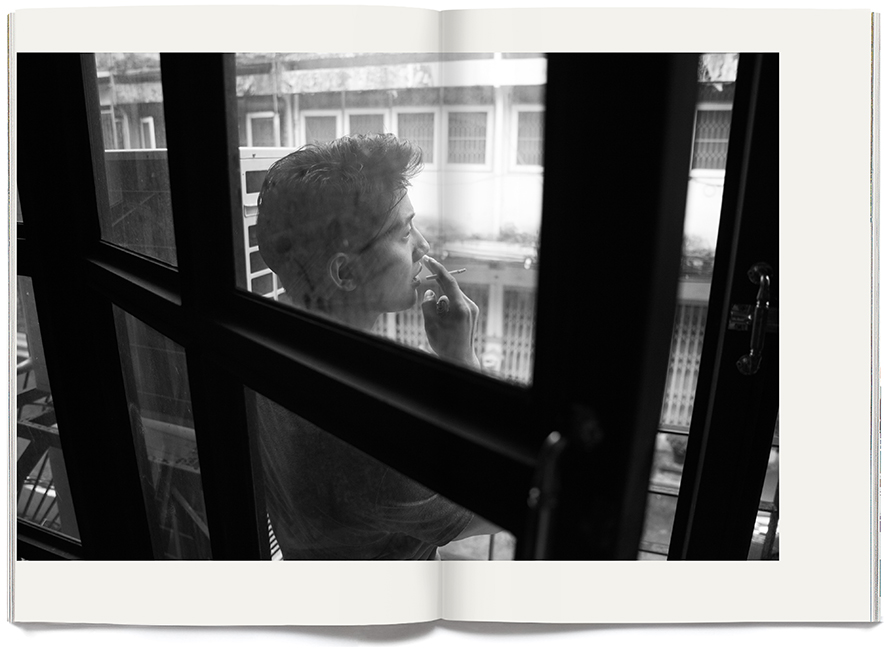 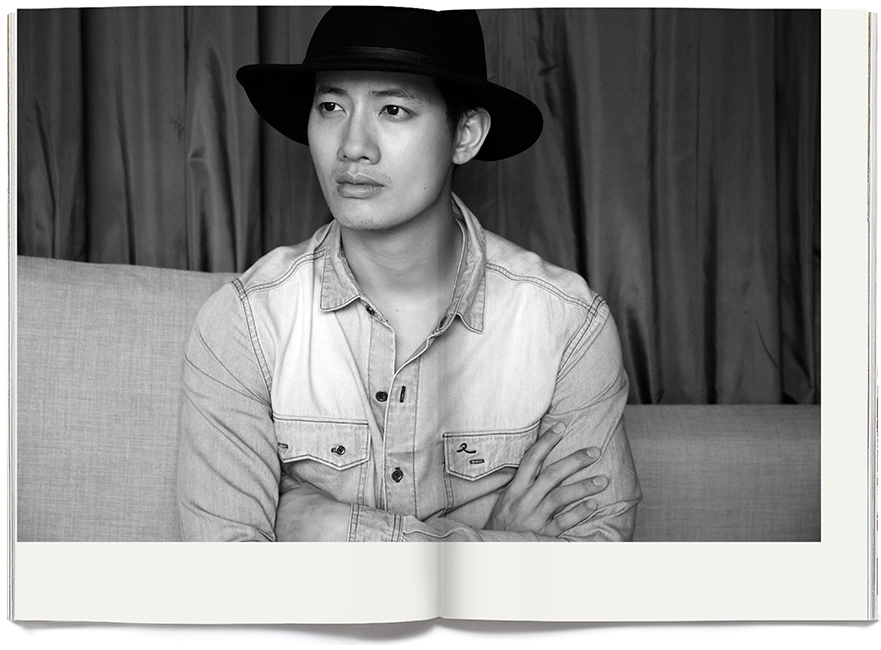 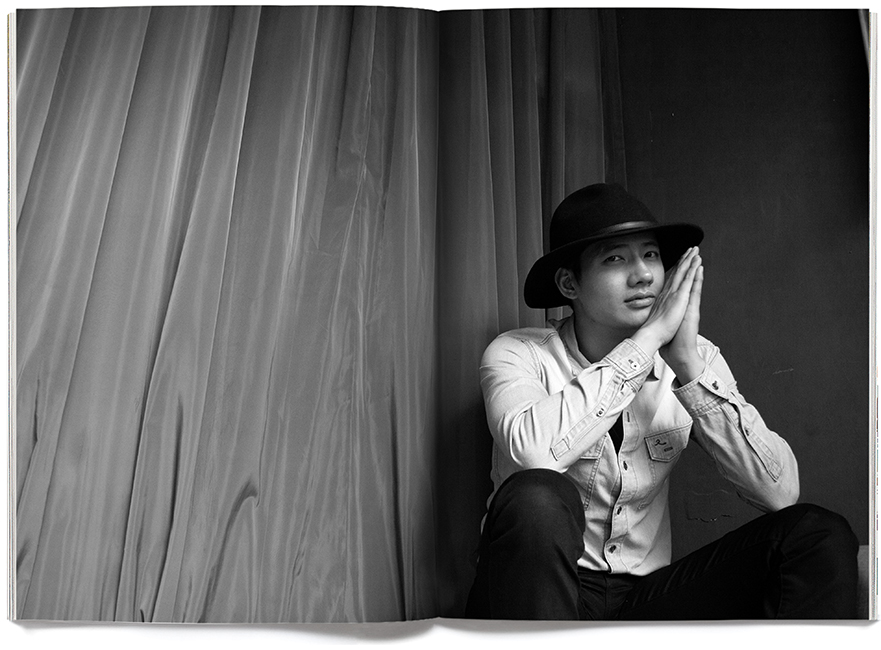 ML: Where were you born and where did you grow up?

ML: Please tell us about your first creative moments. When did you start realizing you had a thing for music?

PA: When I was a kid there were those pop rap Thai bands like Raptor, X3, and Super Gang. I was a fond of their sound , so they are ones that influenced me to practice music. They got popular very young, the member of X3 played guitar and drums at 13. Listening to them I had the desire to learn how to play guitar, so I went to classical guitar lessons between 6th and 7th grade for 2 years, then I switched to electric guitar.
As a teenager I was still listening to Thai pop music but also Hanson, The Moffatts , and Boyzone. Time passed, when I turned14 a friend of mine introduced me to Nirvana. His older brother had hundreds of tapes, mostly alternative music such as Green Day , Foo Fighters, and Ash. It was around the time that Kurt Kobain had just died.
Then, I started a band in high school with four other friends, OPERA RED. We were playing alternative Thai music, like modern dog. I was playing the guitar. We enrolled in the school contest but never got to the second round. We kept the band going for three years in high school and then we split up, and I joined Mahidol university. There, I was part of another band called ‘Let me your love kamikaze’, doing covers of Jimmy Hendricks and Red Hot Chilli Peppers, The Clash…
The bassist was from Seattle and he introduced me to The Clash and The Doors among others. We wrote one song for the university band contest and we won! Unfortunately, we failed to win the national.

ML: What about your first success? How did it all start?

PA: While in my second year in Mahidol, I was in new band named Slur, I was still playing the guitar. This time we made an album that was released by Smallroom label in 2006. It was quite a success. Then I went on an audition for a part in a movie, the assistant director knew the band and asked me to go. I got the role in a horror story body #19. That how my career as an actor started .
I unfortunately split from the band after the third album and since then, I go solo. For the second part of my music career, Bob Dylan inspired me to write my own songs. My style was Folk for the first album, full band country for the second, the third is half country half electric

ML: Do you identify more as an actor or a singer?

PA: Actually both, but most people think of me as an actor and a weird singer.

ML : When did you start to be a public figure? What were the first effects of celebrity?

PA: After I participated in a drama nine years ago with Aum Patchrapa, one of the biggest star in Thailand, I became a public figure. At first I did not know how to handle it. People somehow found out about my phone number and started to harass me. There was even one girl who would call me masturbating over the phone. It drove me crazy, but not for long. I realized that fame is not a bad thing, if you can handle it well, you can also use it for good cause. Nowadays I learn to deal with it, because as time passed, the fame faded, and it’s easier for me to walk down the street and not get mobbed.

ML : What impact did it have on your social life?

PA: Some friends who are not that close to me said I had changed but the close ones thought I was the same. I mostly kept high school and university friends.

ML: Please tell us about your incoming projects?

PA: So, in terms of acting there is this movie called ‘Khun Pan 2’ out this August and two dramas call ‘My Girl’ and ‘Bangkok Naruemit’. Music wise am still in the process of writing my new album whose first song is set to be released next October. It is inspired by the music of Pusha T, The Weeknd and Kanye West. It won’t be a rap album though, just inspired by hip hop beat. The theme is about an intense, addictive love story, it’s about girls mostly. I read a lot of Thai novels by Danaran Seangthong and Prabda Yun, but now I’m also into foreign literature such as Ernest Hemingway. The first song has a Hemingway feel. To explain, he is not afraid to have losers as main characters. The characters in my songs can relate to that, they are losers but in a fun way, their misfortune is depicted in a way that isn’t too emotionally dark. I also use metaphors to avoid censorship, because in Thailand we can’t use bad words depicting sex, drugs or suicide. I found it’s a challenge to do that. For the rhythm part, I want it to be a slower version of dance music, I would actually love to have it played in a club.

ML: I know you like French artists like Jean Claude Vannier, who was an incredible music arranger in the 60’s, and also Serge Gainsbourg. What influence do they have on your music? Do foreign artists also have an impact on your creativity process?

PA: I know Serge Gainsbourg because I first heard his instrumental song, called Cannabis, at a friend’s wedding. This album was produced by Jean Claude Vannier. Maybe for my next project I might be more organic and get inspired from them.

ML: What is your favourite kind of character in movies?

PA: It has to be someone different from me, for Khun Pan 2 I had to practice shooting with guns and riding horses. Something I don’t really do in my real life.
Another time I was a policemen for a Singaporean film and so I spent time in a police station and learned judo. Since then, I fell in love with judo and I still practice today.

ML: You spend a lot of time by yourself, is that a part of your creativity process?

PA: Not really I just enjoy to be by myself, I don’t think being alone is a sad feeling, I quite like it.

ML: What is the importance of the city to your inspirations?

PA: In Bangkok I recorded every album in my friend’s studio in Ratchada. This district has such a strange vibe at night, there are night markets, prostitutes, clubs, gigolo bars, it inspired me a lot. I have a kind of love-hate relationship with the city because of the chaos, the fact that there is not a lot of public transport and that you can’t really rely on the justice system, it that mainly relies on bribes and corruption. I wish the underground scene and prostitution was finally legalized and not functioning in the hypocrite way it is now, that we could finally collect taxes from the underground businesses and allow the women who work there live proudly of their career.

ML: Creativity in BKK has its own identity, like its Asian neighbours. I really think Thai youth have an incredible sense of style. Do you observe the kids on the street and get inspiration from them?

PA: I look at them and try to be different. But I have to admit that in term of style, Thais are good.

PA: I dress casual in everyday life or a little rock style for an event or concert. I like dressing cause it reflects you and influences how other people treat you. It also shows how you treat an occasion.

ML: How would you describe the importance of image in your industry? Is that something that really matters to you?

PA: Yes of course it does, I mainly do it for myself but try to keep good manners and dress accordingly to where I am invited.

ML: What frightens you the most about the future? Do you express your fears in your art?

PA: In my first solo album, I wrote a song about when I am not famous anymore, called ‘I’ll be missing you’ . The song is about when the time comes and fans have forgotten about me. Right now I feel it’s happening. Fans start changing faces, changing ages. Some of them change to follow other artists. I care about it but it’s not too hard cause it will happen anyways so I better learn to deal with it.