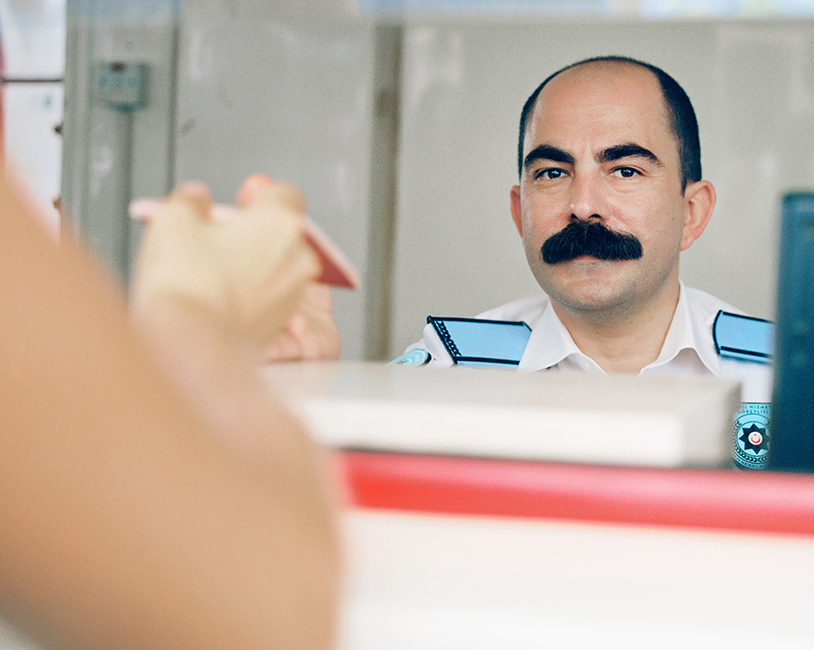 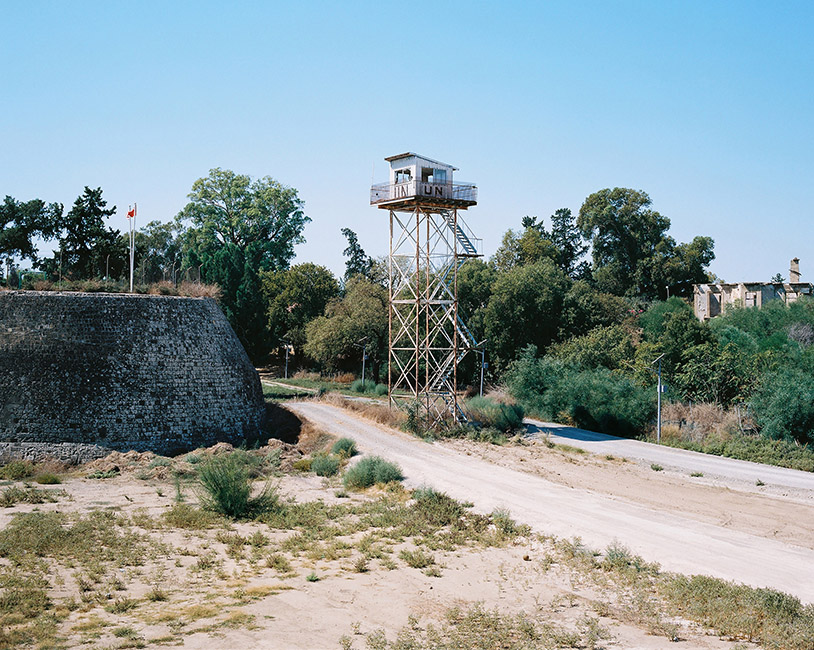 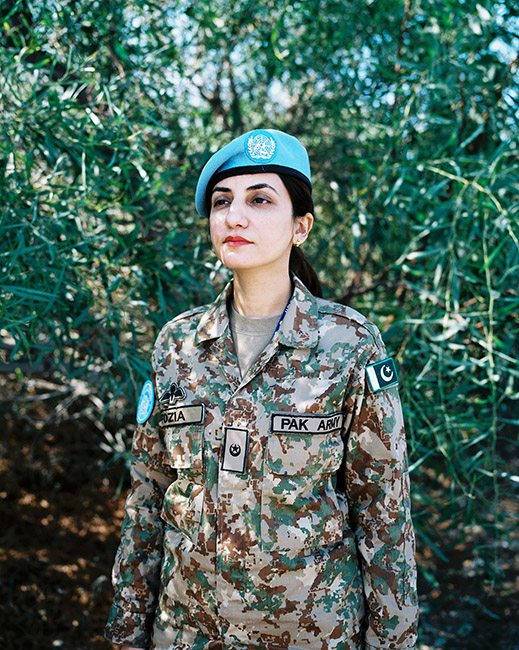 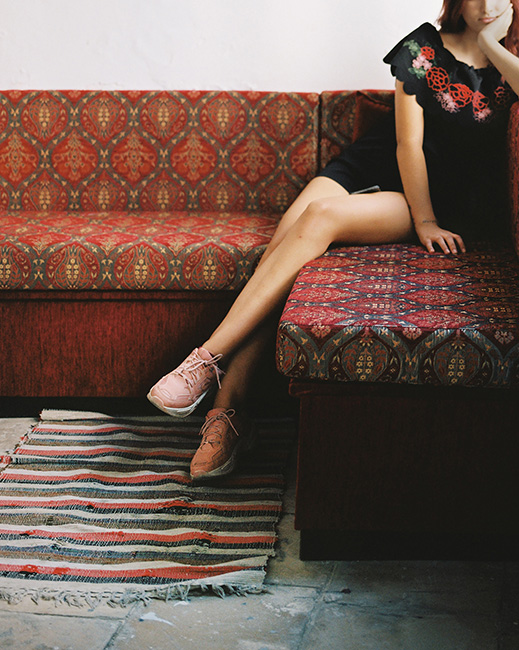 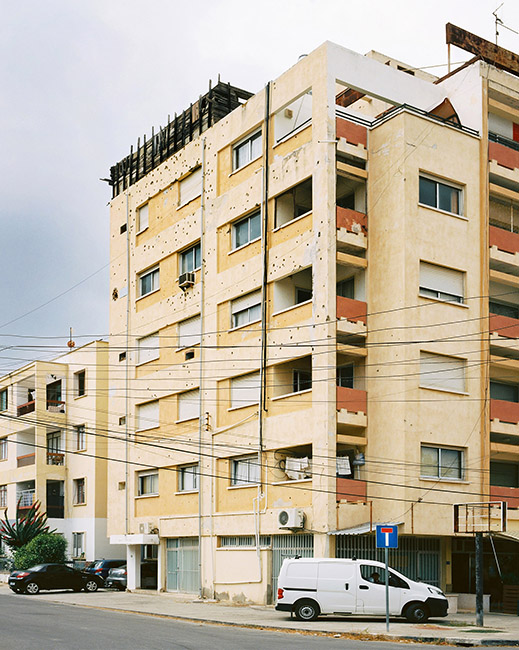 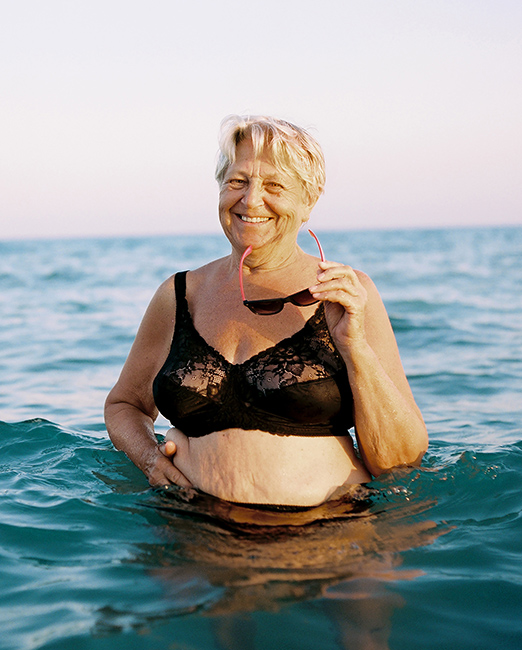 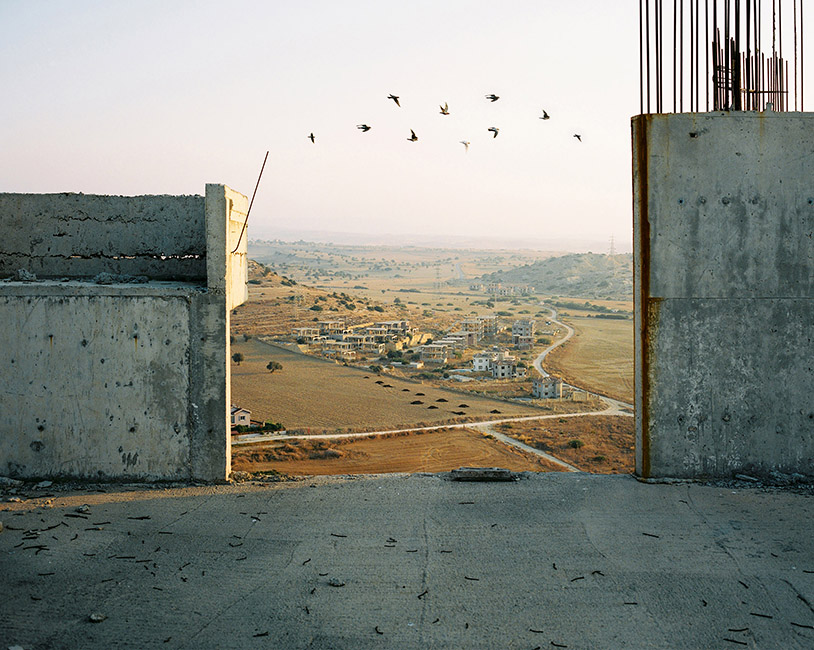 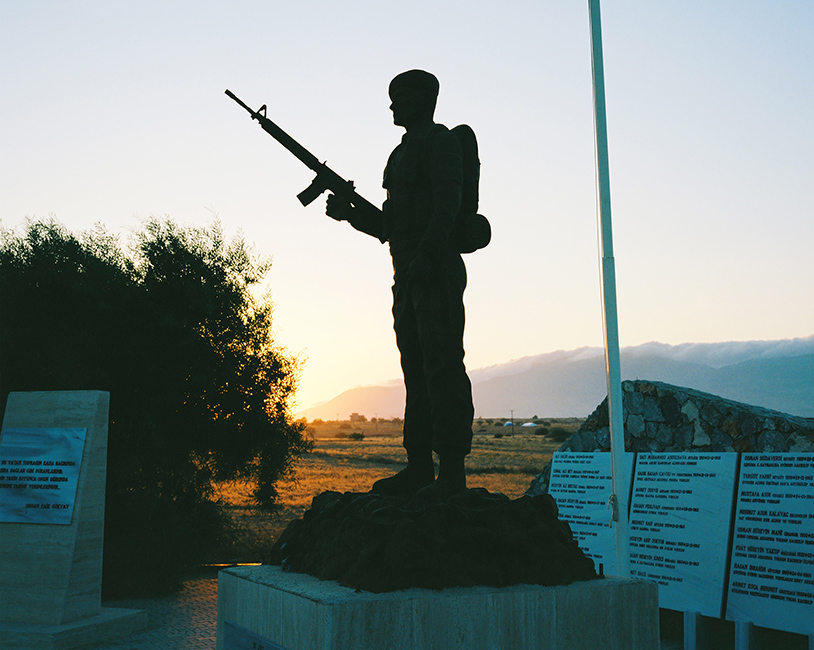 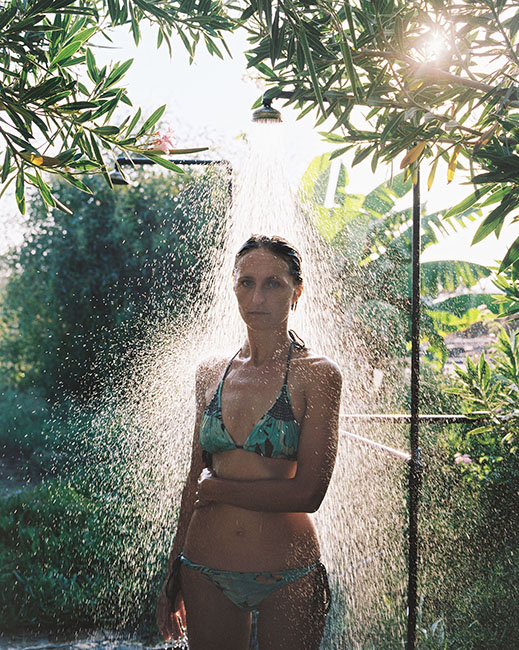 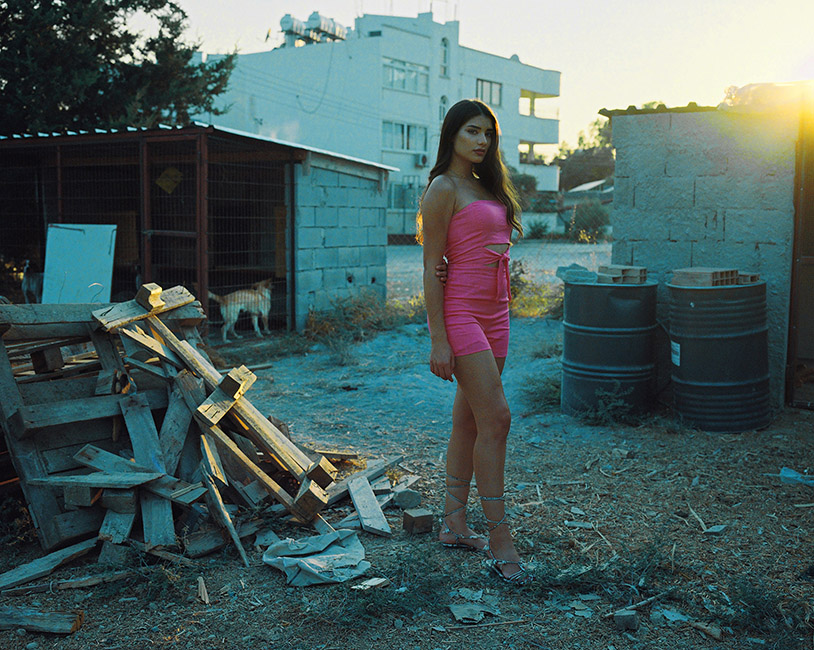 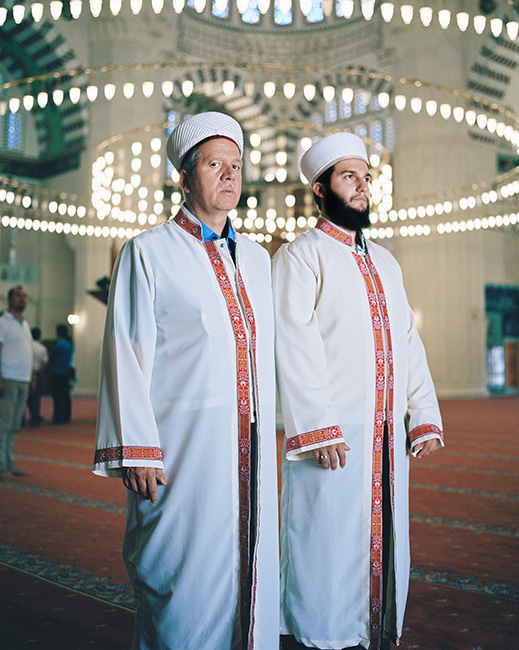 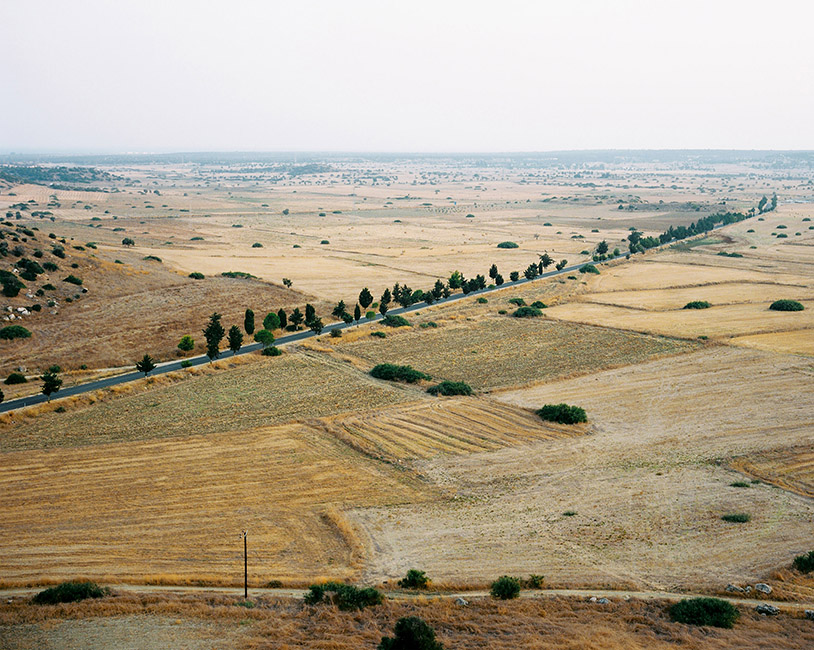 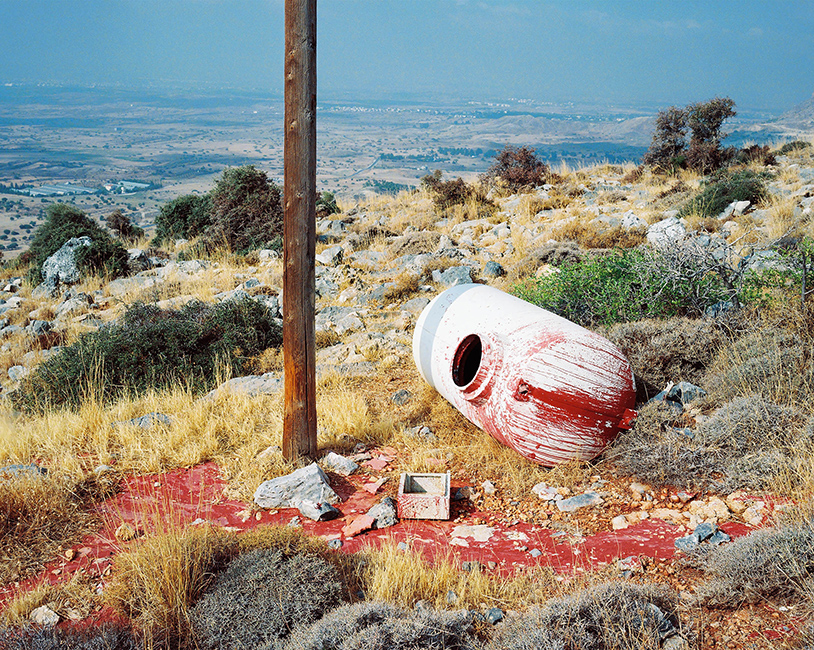 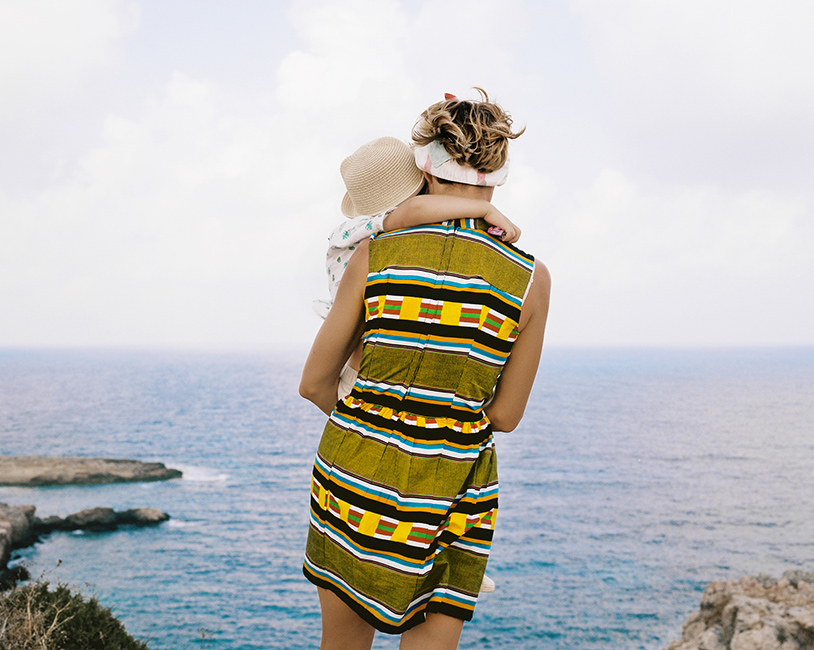 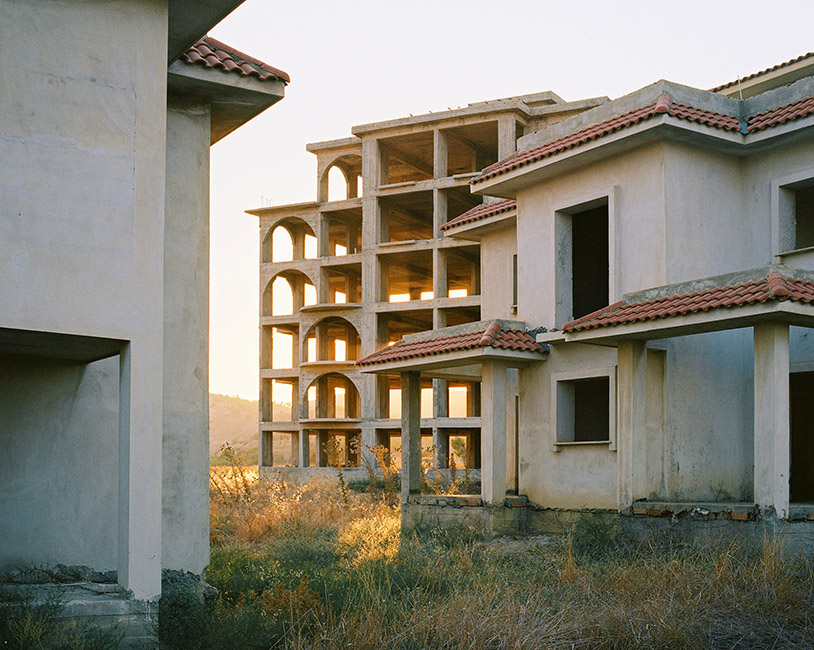 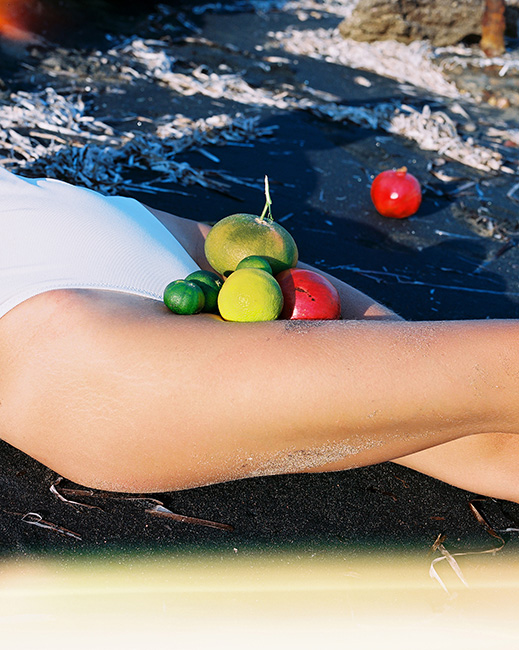 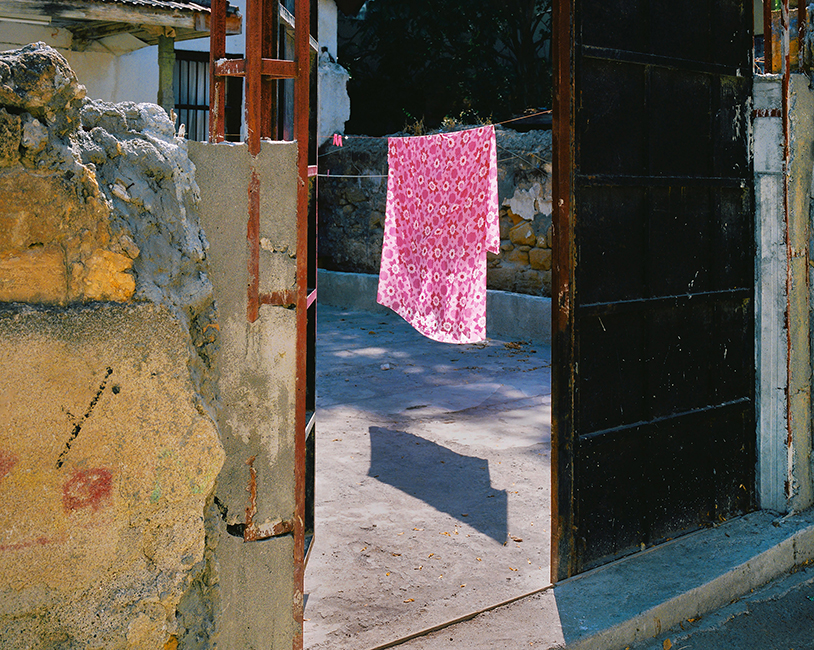 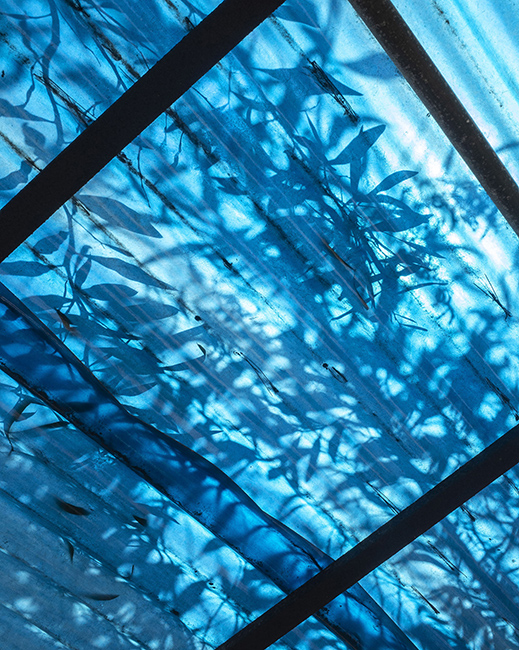 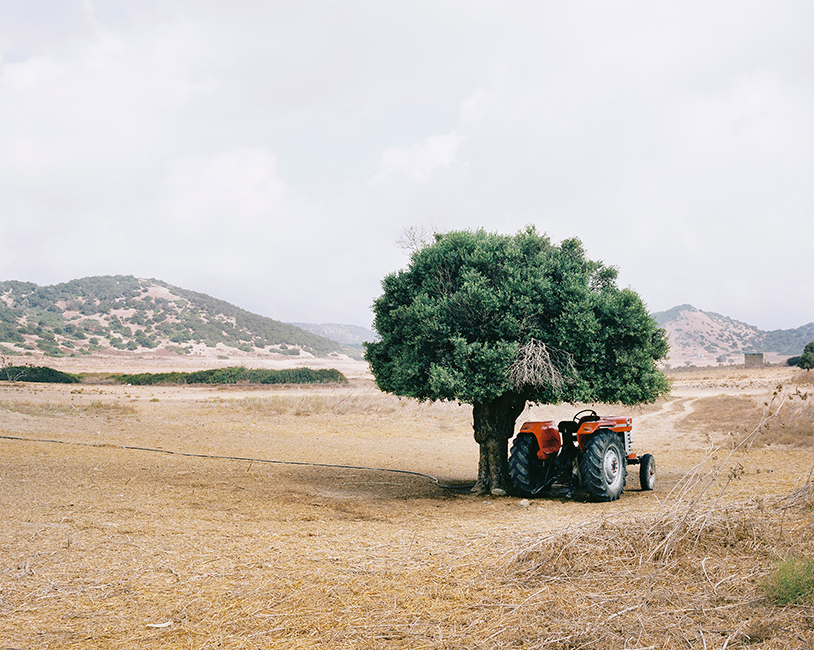 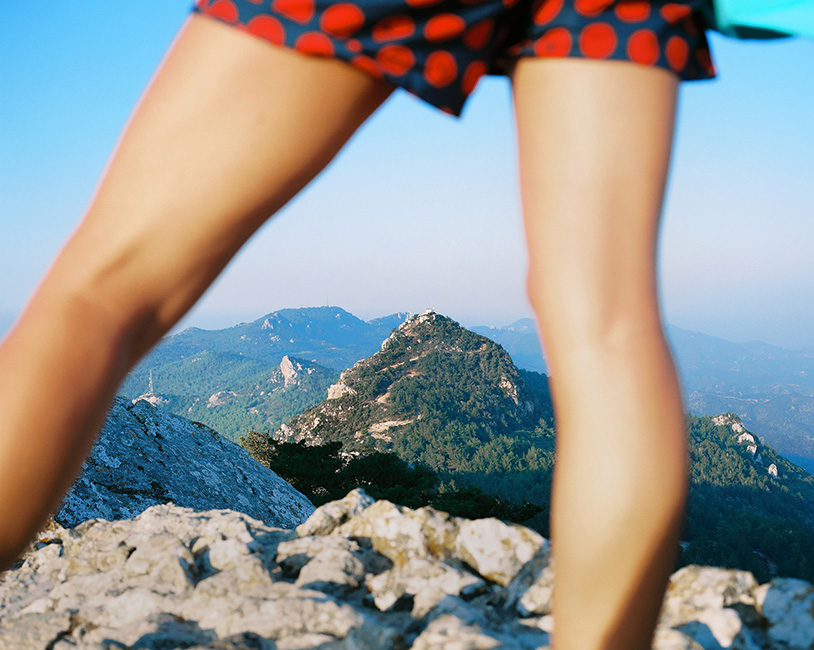 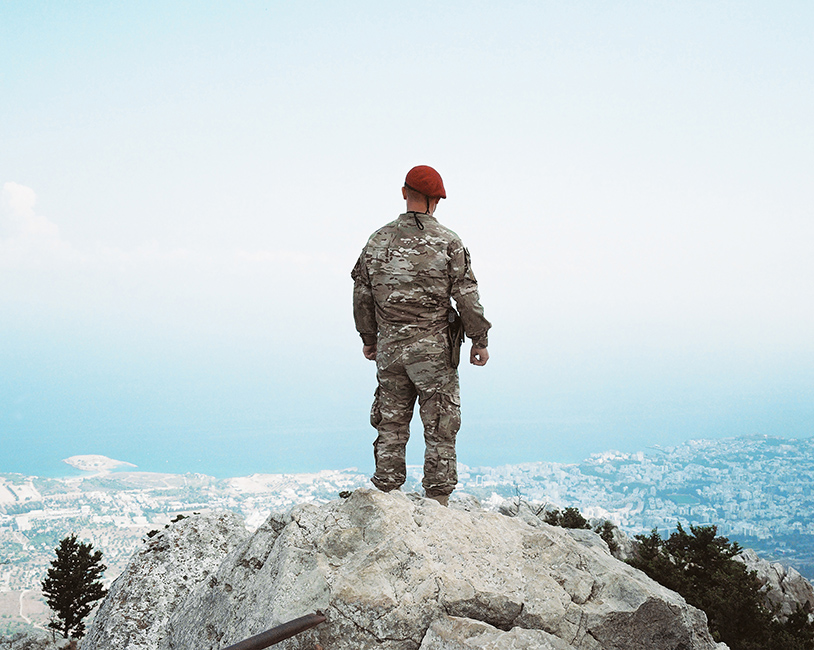 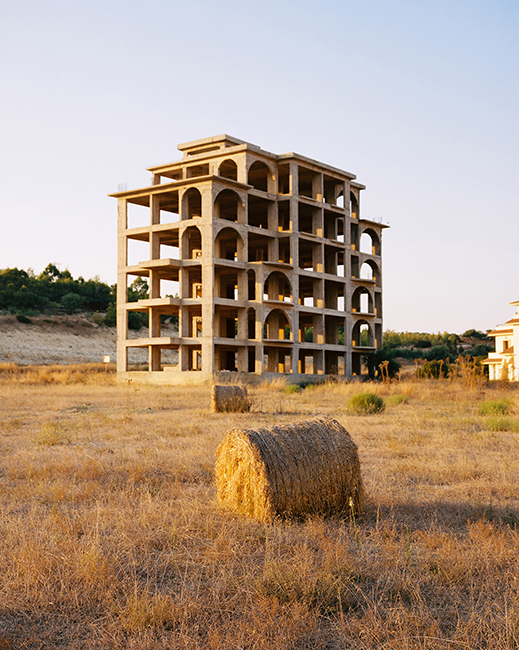 
ML: What drew you to visit Cyprus?

GC: It was for family reasons : my "family in law" lives in Ekaterinburg (Russia), and we do live in Strasbourg (France).
The Russian side wanted an affordable country with a seashore to swim, geographically located between the two of us.
I agreed for Cyprus, because I did not even know that this country exists, and specifically its northern side, with no French people...

ML: Cyprus has a history of invasions dating back to the antiquity, from various civilizations such as the ancient Assyrians, Egyptians & Persians as well as from Byzance, the Arab caliphates the Ottoman Empire & The UK.  It finally got its independence in 1960 only to be torn apart a few years later between Greece and Turkey. What is the civilization you think left the biggest impact culturally? Is the Turkish culture predominant?

GC: I just saw the northern part, which, of course, looks more Turkish than the "greek" south : roadsigns, flags, medias, langage, habits, express this Turkish presence...
The ancient cathedrals are now mosques, or they are abandoned, or reconverted as shops or cafes....
Anyway, the "native" Cyprus people insist on the fact that northern Cyprus has its very own identity, very different and unique.
Some of those natives, of any generations, even claim that they "suffer" from the high amount of Turkish settlers who have little esteem towards those endemic specificities and traditions. As a foreigner, I read during my stay "bitter lemons" by Laurence Durell (british diplomat and writer who experienced and understood this specific island), and it helped me a lot to have an historical and cultural approach to this "complex" area which was strategic during ages (crusades, invasions, etc), and now considered as a natural "aircraft carrier" for the big nations ; I even heard it's the "European Cuba" by a US official.

ML: I read that you like to mix documentary & fashion photography as well as historical archives. Could you explain how you visualize your photography as a whole?

GC: I try to do what I don't find on the web and in bookshops ! Indeed, most of the work produced nowadays mobilise only the tools of their own speciality.
Photographers use photo. Musicians music. Also, most of the works created by a professional are made to be sold, without enough time to build them well enough.
Too serious, not enough generous. And without the spontaneity and "amateur clumsiness" that could give them an extra touch of soul...
I personally find video, movies, music or literature are much more immersive than photography. So lets mix them, to make people feel what you really felt.
So I try to mix different medias to bring back such a way of understanding a theme, video & text, drawing and photos, etc, assuming this subjective approach.
Above all, I try to produce something that will not moralize the viewer or tell him/her, this is what to think.
A good example of mixed art : Eric Andre, Tim & Eric, Jean-Louis Costes or the movie "Borat" by Sacha Baron Cohen :
it's much more a sociological and horror movie than traditional sociological and horror movies ; but officially, it's a comedy.

ML: What are your influences from fashion photography?

ML: You covered regions of the globe plagued by conflict such as Cyprus and Ukraine, would you consider yourself a war reporter?
Aha, of course not. Unlike them, I don't do it for the money, the grants our the curriculum vitae ! And I don't try to be a hero or a martyr like them...

GC:Honestly, I met lots of those guy and girls covering war and diseases all around the world, shooting it coldly, and then expressing their indignation when welcoming a new prize for their pictures. All of them did not even feel any empathy for the environnements and people they shoot. Most of the time they work with fixers, already know what they want to shoot, without any effort of comprehension. In a way, I understand : life is short, time is money. Their job is a quite hypocritical work, attracting a certain type of people looking for adrenaline and consideration. And who are ok to make stereotypes more vivid... Only exceptions work honestly, and disinterested.
My personal works are motivated by my own intuitions, organized on my own financial ressources and insurance... Its rarely assignments.
Sometimes I show the works only year after I shot it. So, definitely not a war reporter ! I produce "documented point of vue".

ML: On some of your photos we can see  a building covered with bullet holes, showing the tensions while but other photos also show happy people bathing in the mediterranean. Would you say nowadays life seems to be back to normal and that there is more frivolity?

GC: Visually yes, but in people minds, I don't know. you can see mosques and miniskirts, and the TRNC Miss I shot went back alone home, without any risk in Nicosia suburbs... So, much frivolity yes, (you even have a city dedicated to casinos and perdition, like Vegas...) but perhaps a "temporary" frivolity, precisely because the brand new government is more Ankara led, against reunification, and the "islamisation" of the country will impact the everyday life. So visit this country asap !

ML: Are there many UN Turkish soldiers stationed across the Northern part?

GC: I don't know : I only met northern Cyprus ones (and local people recommended me to not even try to shoot Turkish army if we see some), and international UN : Pakistanis, Colombians, etc.

ML: This separation is between not only 2 countries but also 2 religions, would you say it’s an ethnical or religious war?

GC: It apparently started with religion, baked by political and geostrategic stuff. I have no habilitation to answer (everybody should read "bitter lemons" !),
but prefer the specialist to answer, as Theotime Chabre, I met him back home, and he's the best on this thematic (at the very bottom is his text about modern TRNC).

ML: In one image taken from what seems to be the roof we see a group of abandoned/destroyed buildings. Can you explain exactly what it is? Does it have anything to do with the war?

GC: Exactly, no. But a lot of construction sites are stopped because of a previous economic crisis, and bad previsions made by investors and speculators from Lebanon, Israel, Turkey and even middle east. They wanted to make resorts for the "reunification" days, but I also heard that it could just be money laundering.

ML: I hear the new generation is modern and definitely more open to the west, with more liberated girls. Is it very striking to the eye? Are they, you think, a hope for the next decades generations when it comes to working towards to come in term of peace between the two territories?

GC:Even if you can spot the young tourists from Russia or England, young TRNC people look to my eye like every young people do. All the ones I spoke to,
even without english basics, were open and curious. I made the portrait of a young activist pro-reunification (boy with glasses), living in the countryside but very well educated and now studying french in Besançon (France). Young people in TRNC are desperate to see their diplomas only useful in Turkey. They want to be able, as their neighbors from southern Cyprus. (UE integrated), to have facilities to travel and work in Europe or elsewhere without visas. They were optimistic before the elections, I think now it changed, with this pro-Ankara new leader, and what Turkey did, does and will do into the international affairs... As we see in Syria, Ukraine, Yemen, Lybia, etc, it's hard to find peace in a strategic country...Most of the time, youngsters have the same mind than their families : natives want reunification, settlers no. But anyway all their smartphones were all better than mine...

A once frozen conflict is slowly coming back to life as Turkey's interferences grow in the « Turkish Republic of Northern Cyprus ».

Up until two years ago, the north of Cyprus seemed to have fallen in a sort of political coma. The « north » has come to existence as a distinct region after the Turkish military intervention of 1974,  the epitome of a latent civil war since the 1950s between the Orthodox and Greek-speaking majority and the Muslim and Turkish-speaking minority. Emptied of its greek-Cypriot population, filled with the Turkish Cypriots from all around the island and settlers from rural Anatolia, the territory was turned into a small republic, unrecognized by all but Turkey. It was supposed to reunite with the South when the whole island was admitted to the EU in 2004, but remained at the door of the union after a failed referendum. The subsequent negotiations have been yet fruitless and the small territory vegetated towards an unknown yet quite stable fate. While it stayed marginalized from the international community, it benefited from the military and economic support of Turkey, a support which is viewed by many among the Turkish-Cypriot people as a form of occupation.

For two years, alas, the situation has started to change noticeably : the deep economic crisis in Turkey since 2018 hit the country, which uses the Turkish lira, hard. Even more, the quest for hydrocarbons in the Eastern Mediterranean reached a threatening level of confrontation between Turkey and Cyprus, Greece, and by extent, the EU, even if no gaz has been exploited as of yet. In October, the situation got deeper with the controversial election of a pro-Turkey president in the Turkish Republic of Northern Cyprus with the active support of Ankara, that did not hesitate to reopen a part of the ghost city of Varosha for the first time for 46 years. The population, today, is split between a will to preserve their culture and their right as citizen of the island, and the fear of many to be progressively absorbed by Turkey.

The youth, born long after the separation of the communities and the creation of the territory, however manage to be part of the global world while trying to preserve their specific identity. The north is too often looked at (only) as a political curiosity. But it is first and foremost the home of so many individualities, the banality of everyday life, the hidden wonders of the landscapes and that is exactly what Guillaume's work is offering. His photographs and the testimony of a variety of local figures guide you through  a place where Ancient Greeks, Lusignans, Venetians, Ottomans and Britts left their marks, a tourist resort for the Turkish and the British middle class that goes from eco-lodges to dodgy casinos and prostitution, a vibrant higher education hub for students all over the developing world, a place of sometimes anarchic urbanization which has also one of the most preserved coastline of the region and a remnant of the tragic fate of the hundreds of thousands of uprooted Greek-Cypriots, whose past presence is visible everywhere through abandoned churches and the graveyards.