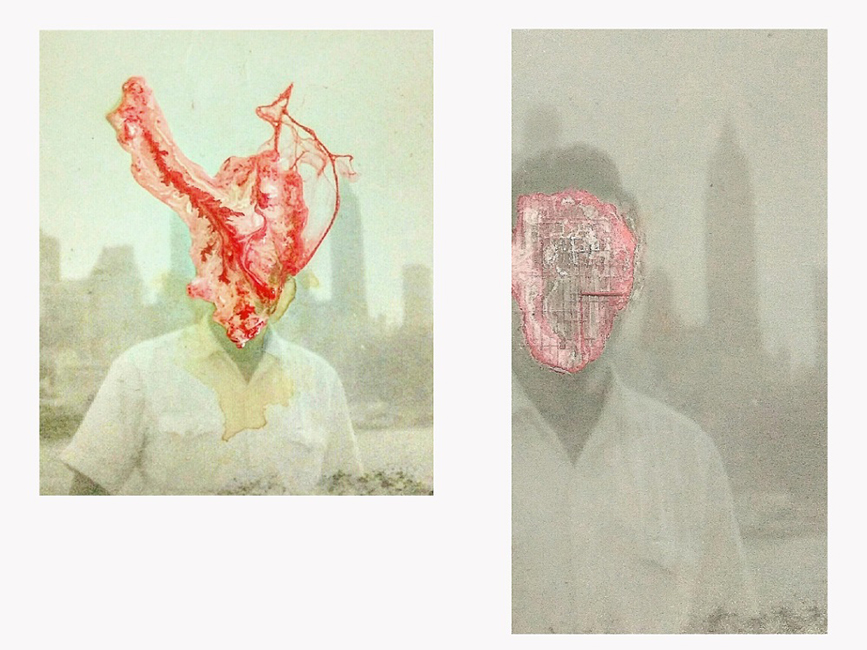 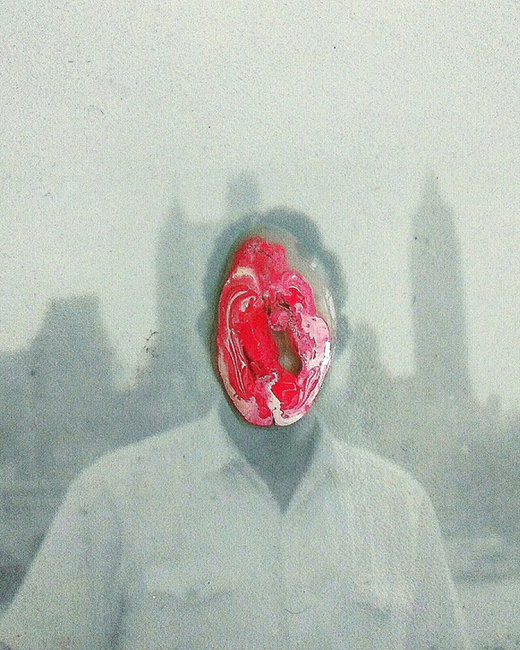 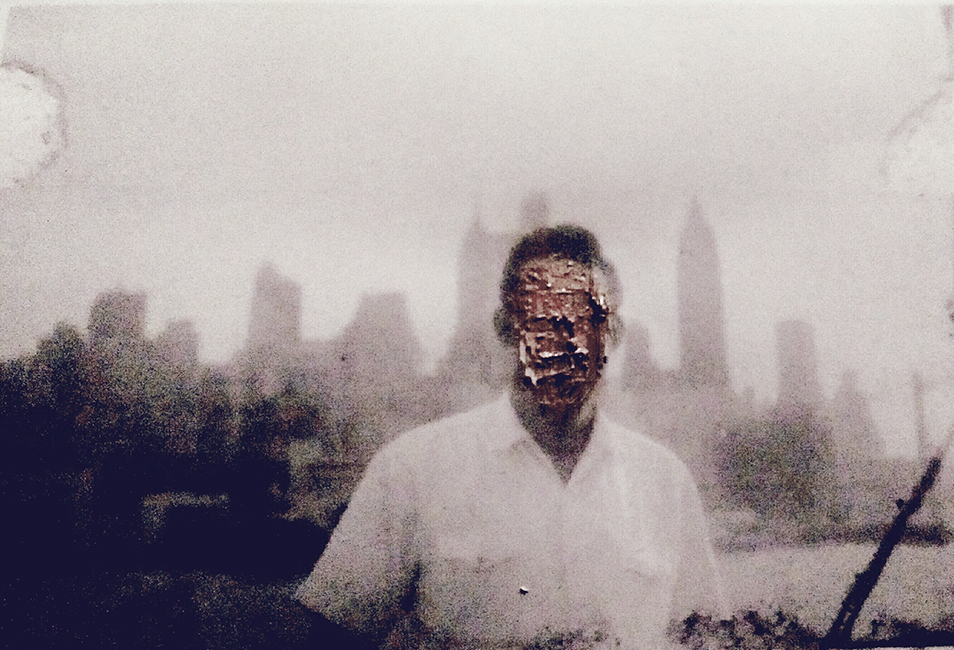 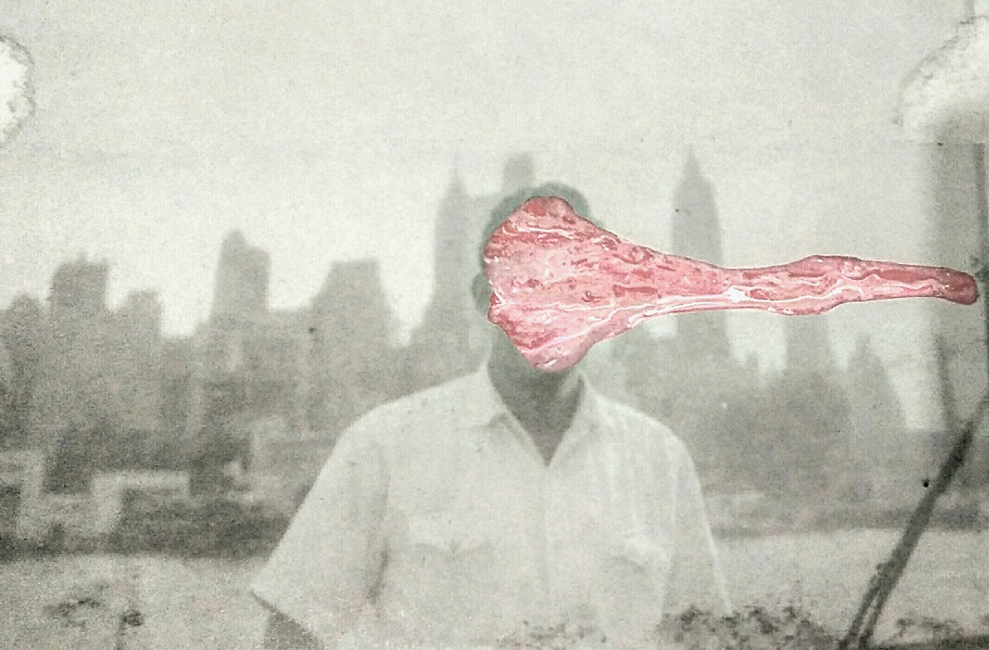 NM: The photo used in this series looks vintage. Did you know this person or did you find a random photo that you were inspired to work with? Do you know the year and place this photo was taken?

CT: I found the old photograph at a flea market in Manila. It was most likely taken in the 1960s and it shows a man in his late 30s, with markedly Filipino features, posed against the iconic skyline of New York City.

NM: What did you see when you first acquired the photo?

CT: Ginoó is a Tagalog word for “sir”, “mister”, or “gentleman”. The man in the photograph was most probably an overseas Filipino worker in the United States, on a day off perhaps, on a trip, posed here as a tourist. I was struck right away by his mirth, his posture and self-assured bearing, his clothes, but even more so by how familiar he looked, how distinctly and undeniably Southeast Asian his countenance was, in contrast to the foreignness of the place—a fellow Filipino whose body was markedly elsewhere, set against the backdrop of First World modernity in 1960s New York. To the Western eye, on the other hand, his figure was perhaps the one that didn’t quite fit, the one that was out of place and alien, although his face was the sole marker of this difference. It doesn’t take a hard look at the photograph for one to recognize how palpably the image intimates questions of belongingness, identity, and place, but other than regarding it as a document of Filipino diaspora, I am fascinated by the itinerancy of this image itself, the means by which it reached me, a snapshot of an anonymous person from my country who may no longer be existing, a photograph whose provenance and transport are intertwined with migrant labor, empire, and the intimate and affective traffic of transnational, familial correspondence. I find it productive to look at the found photograph as an interface other than being a potent historical index; I am fascinated by its arbitrary, anonymous, and serendipitous nature and the almost archaeological mode of access, contact, and acquisition. It has reached me in the present, across time, space, and milieus, like a drift bottle—this in itself another form of correspondence and communion.

NM: What media did you use to create this series?

CT: I used gouache and glycerin on silver-halide reproductions of the photo.

NM: You have created anonymity by using mixed media to distort the face. It makes the viewer ask questions and try to discover who this person is. What inspired you to distort the face of your subject? Distortion often seems like an act of aggression, but this doesn’t feel aggressive. It feels tender and sympathetic. What was your motive with this distortion? Was stripping away the identity of your subject the main focus behind this series?

CT: Yes and no. The series employs erasure and distortion as a paradoxical gesture: an erasure that marks, or distortion as re-inscription. The process allows the artist the role of an intercessor with the document, towards problematizing notions of self and place, and the convolutions of desire and power in their relations, and recasting the image as a familiar but unsettling liminal space for exploring what is left and what is left out, the nameless and the unseen, the figure caught in an act of meaning and becoming, of being named and known, teetering at the brink of recognition and form. The document is falsified, made uncertain and ambiguous, a process wherein the man in the photograph is disfigured, “as in those terrible dreams,” writes Barthes in A Lover’s Discourse, “in which a loved person shows up with [a] part of his face quite erased.” The acquisition of the photograph is an excavation of sorts, and the distortion is an intervention, a fabulation of a document into a potential alternative act of remembrance, interposing a historical moment between dream and private memory. Occluding the face—the particulars of his person—and leaving everything else as they are, creates a series of poignant and surreal images in which the paint on the photograph becomes an intermedial and metaleptic rupture, and marks a collaboration with found image, my own way of inhabiting this photograph and supplanting myself in him, in a manner of speaking. Effacing the sole marker of his semblance (to me) and his alterity (vis-à-vis the Western gaze) also creates an ambivalent and non-binaristic relationship between the man in the photograph and the spectator, and between the Filipino figure and the American milieu he is set against.
The intervention reworks the traditional role of photography as a means to carry out an act of remembrance while exploiting a Barthesian sense of the photographic image whose enactment of presence is a sheer index of what has gone, the photograph being, intrinsically, an elegy. I meant for distortion to be a mark that memorializes, amid a pervasive sense of mortality, in which the repetition and variation of erasure function as a persistent and recurring stain that both concretizes him and renders him spectral, leaving a mark on the surface that is abstract but insists on the materiality of the image and the life (and the “that-has-been”) that it conveys.

The aforementioned archaeological bent of the series resonates in the passage below from the poet Louise Gluck in her essay “Disruption, Hesitation, Silence”:

“I am attracted to ellipsis, to the unsaid, to suggestion, to eloquent, deliberate silence. The unsaid, for me, exerts great power…. It is analogous to the unseen; for example, to the power of ruins, to works of art either damaged or incomplete. Such works inevitably allude to larger contexts; they haunt because they are not whole, though wholeness is implied: another time, a world in which they were whole, or were to have been whole, is implied. There is no moment in which their first home is felt to be the museum. ..[T]o see them was to have a sense of being back in time, back in the middle of something. Certain works of art become artifacts. ..[T]hat which we do not know, of the universe, of mortality, is so much more vast than that which we do know. What is unfinished or has been destroyed participates in these mysteries.”

As a deconstruction of portraiture, this series of photos braves the presumptuousness of accounting for a subjective becoming in a still image, as figure, being, and quality, while acknowledging that these affectionate documents are mere images that are always only partially true. This reverent ‘stain’, this occlusion, is meant to partake in the sacral and numinous.

NM: Did you use warm tones for the distortion any particular reason?

CT: ”I want to live there," writes Barthes in Camera Lucida in his discussion of the ‘habitability’ of photographs of landscape. The United States has always occupied the Filipino popular imagination as the land of milk and honey and a site of snow and winter, and venue to the White Christmas, among other dreams propagated by colonial and capitalist forces. “Looking at these landscapes of predilection,” Barthes goes on to say, “it is as if I were certain of having been there or of going there.” The photograph used in the series may be seen as emblematic of the American Dream among Filipinos, the fantasmatic longing to inhabit that utopic elsewhere fossilized in this image. The warm tones infusing an otherwise cold and Western cityscape—a photograph of a “landscape (chosen by desire)”—becomes that spectral trace and signifier (after the erasure) that insists to chromatically inscribe, albeit superficially, a sense of the tropical, deploying climate as a state of being and an inextricable sign from the Filipino body.