Tibetan model & actor Nima says all about his spectacular rising in fashion, and tells the life of an aspiring minority comedian in modern China. 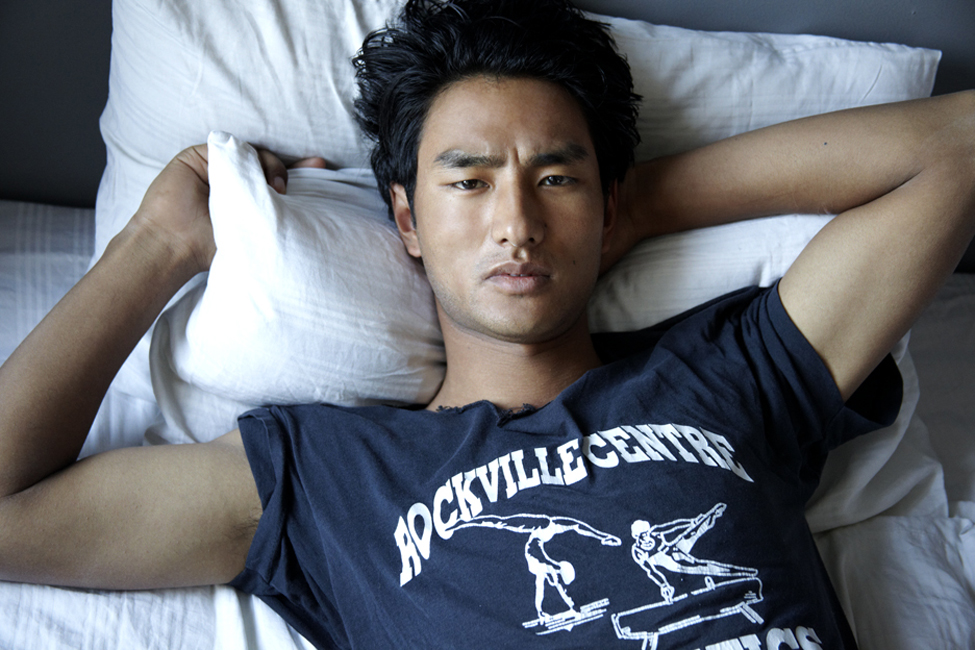 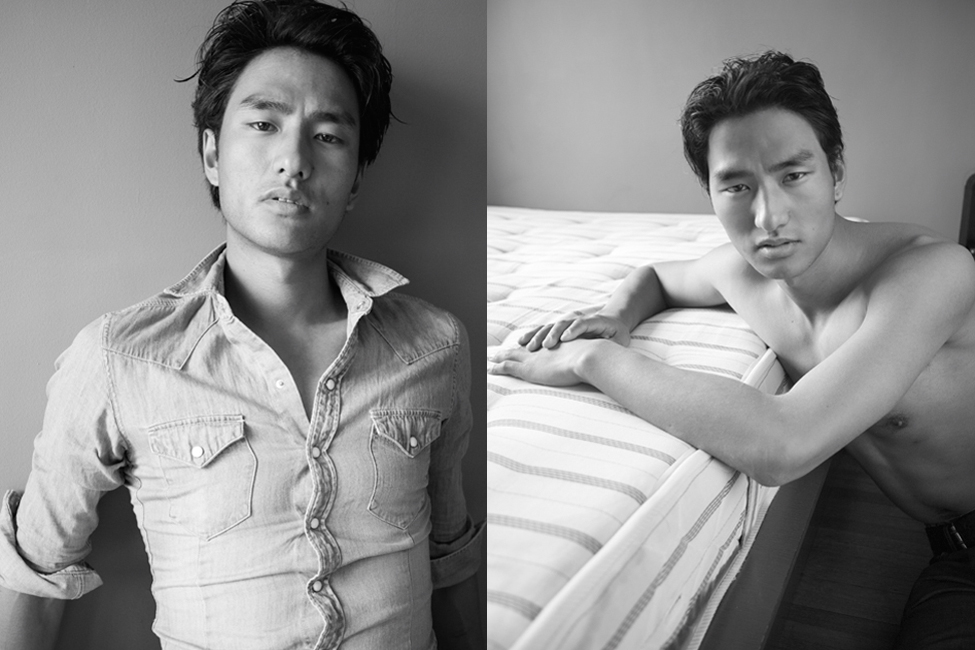 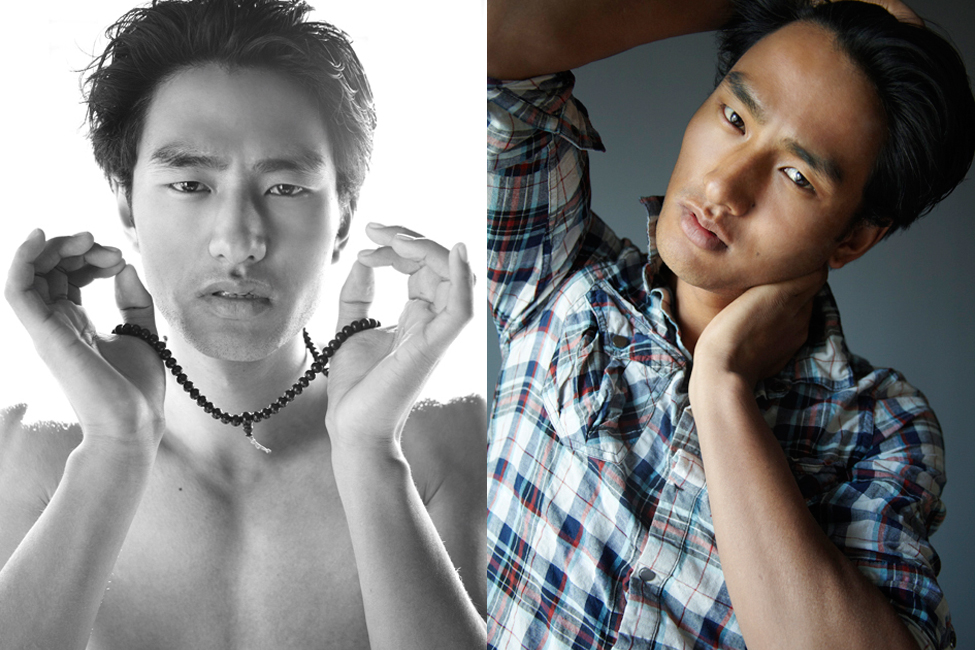 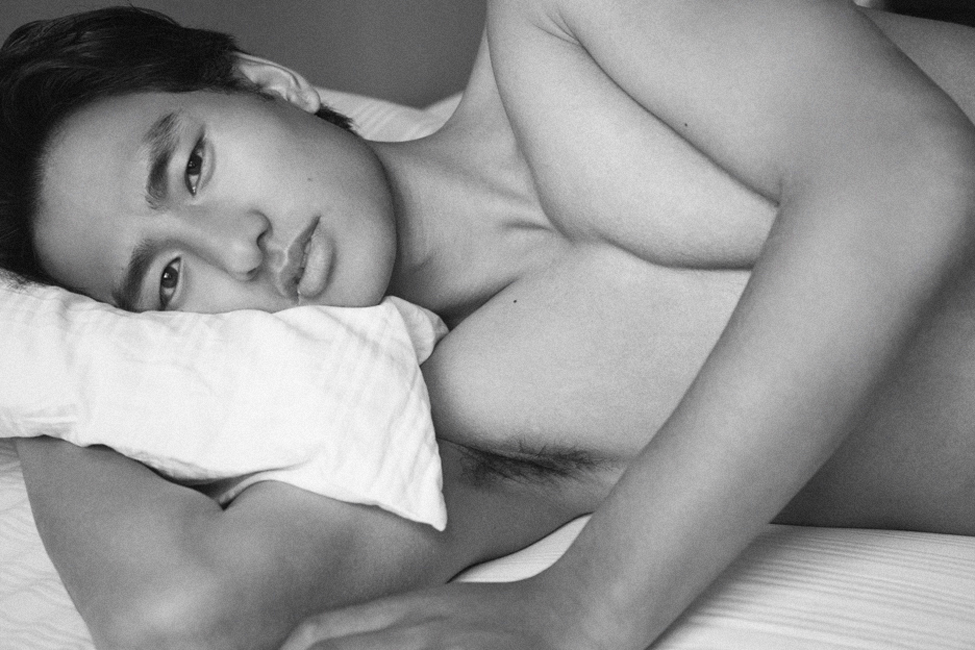 << >>
Photography and Interview by Matthieu Lunard.

Tell me about your where you come from?
I am from the Tibetan mountainous region, east of Lassa and west of Sichuan province in China.

What do your parents do for a living?
My parents both work on the family farm, growing agriculture products.

Do you have any particular childhood memories that would define your upbringing?
The most outstanding memories I have are on the top of the mountain plateau, where I used to go with my grandfather every summer. There, we would keep yaks and cattle, on the beautiful pastures covered with different kinds of flowers. We’d also often pick up wild mushrooms for our family and neighbors, while singing Buddhist prayers under the crystal blue sky. Such wonderful memories will be forever in my mind.

Coming from a small-town in the middle of the Himalaya chains in Sichuan, what was your perception of big cities when you grew up?
Growing up, my only perceptions of big cities were the images from TV programs or the movies I watched. High-rise buildings and the busy lifestyle of city dwellers seemed wonderful to me.

Did you dream as a teenager to live in a bigger city?
Yes i did! I was very curious of what kind of lifestyle people had in big cities, and I was dreaming about having a chance to move there at some point in my life.

What was your dream job?
Like any young boys, I dreamed about being a singer or movie star, I also thought about becoming a successful businessman in order to make a good living, so that I could travel around the world and help my family and people from my village.

Was Buddhism an important part of your education?
Buddhism was the core of my education. The teaching and practice of the religion was such an important part of my upbringing, I can definitely say it defines my life. The faith and doctrine were the foundations that accompanied me growing up and will be my strength for the future.

Have you spent some time as a monk?
No, but I have studied in a Buddhist academy during elementary school.

What was your first experience in the  entertainment industry?
Like any other Tibetan child, I grew up singing the beauty of nature and being taught our traditional dances. All of us have the potential to be performers. When I was 15 years old, I got recruited to be a dancer for the Tibetan Arts performance group. There, I spent the four following years as a professional dancer and stage performer.

Was it a difficult decision to take to leave your family and birth place?
Of course I was really excited to be chosen to be trained as a professional Tibetan dancer and performer. Not only was it the life I desired, it also provided a good income helping to support my family and village. However I knew I was naturally going to dearly miss my family. Till now I still remember the tears in my mom’s eye as I left the village.

Why did you end up in Shanghai and not Beijing?
During the four years with the Tibetan Performance troop, we were stationed in Jiuzhaigou (natural park located in the mountains of northern Sichuan). Then I was selected to enter a modeling contest sponsored by Pepsi Cola in Shanghai, and ended up winning the competition. From there my career evolved dramatically. I got signed by the best modeling agency in Shanghai and started a modeling career.

What was your first impression when you arrived in Shanghai?
Contrary to my original idea of an exciting cosmopolitan city, I was not positively impressed when I first set foot in Shanghai. Too many buildings, traffic, and people made me feel dizzy and uncomfortable. The mess and chaos was very different from my original expectation, and I thought that people were tense, lacking genuine smiles on their faces. I can say that my first impression was disappointment.

Did you know anyone in Shanghai at the time?
No, I didn’t know anyone when I first set foot there. But, gradually through work and the contest, I started to make a lot of friends.

How long did it take before you started to work?
Right after the competition, everything went very fast.

Your specific look is very much in contrast compared to typical models in China, your skin is much darker, whereas everyone here wants to look whiter. Do you think those differences helped you emerge as a different type of beauty?
Within my first year of my modeling career, I was featured in almost all the fashion magazines for men and worked with some famous brands such as Diesel, Motorola, and Gucci. I think my fast ascend in the industry, as compared to other models, was because of this unique look. I remember one featuring article in His Life magazine untitled “Prince from the mountain“ that perfectly illustrated this uniqueness.

Do you feel stigmatized coming from a minority in a business where mostly everyone is from Han origins?
No, I don’t think that being from a minority makes a difference in people’s opinion, especially in fashion. But I think that the reason why some people disliked or envied me was more because of my fast ascend, which is quite understandable.

I know that you had your first experience as an actor for ‘Prince of the Himalayas’, in which you stared as the young version of the prince, is it since that you decided to study drama?
I think it has definitely been a revelation. After five years of modeling, I have learned a lot and became a true professional model, but now I want to learn more. Joining the Shanghai Theater Academy allows me to learn more about other disciplines, such as singing, acting in front of a camera, and performing on stage. Not only it strengthens my skills and technique, it also helped me to develop other abilities.

How do enjoy that new direction so far?
I am definitely enjoying being a student in an academic environment.

Any proposition since you seriously committed yourself to studying acting?
Yes, I have had quite a few opportunities to perform for TV and films. But, as required by my school, our academic course is very intense and rigid. During the first two years we can’t consider accepting any acting roles. Learning and building a solid foundation is what is considered important for me during this couple of years.

Are you not afraid to be proposed roles that will stigmatize you as a minority?
I am sure there would be some propositions like that, but I am very selective in my choices.  If I feel uncomfortable with the role or disagree with the message carried by the film, I would just decline the proposition.

Do you have any examples of minority superstars? Someone that could stand as an example?
My beloved teacher Duobujie, who is casted as the king in the “Prince of the Himalayas” is by far my favorite minority actor. He has once been honored the title of best actor in China. He is the only Tibetan actor who has been awarded such title so far.

Do you think show business is compatible with the teaching of Buddhism?
Buddhism doctrine and teaching can be applied in every industry, even in show business. Its wisdom and compassion transcends beyond any regional or sectorial device.  It resides in people’s heart and soul.

Is it thanks to those beliefs that you remain the simple and dedicated person that you are?
Religion and faith are the guiding principals of my life.  Every action is a reflection of my Buddhist studies and practice. It is a treasure of my life and will reside forever in my soul.

When you look back at your life in Tibet and the one now, which one do you prefer?
Every stage of my life is part of my destiny, I can embrace all of it. Of course I often miss my mountain and my family, but I know everything I do now is for a purpose. Also the knowledge and skills I learned in Shanghai will allow me to help the Tibetan people someday. Both those places have something to offer.

When we just met you told me that your dream when you grow old is to go back to the place of your roots, do you think you will ever go back to live in your birthplace?
Of course, I am already planning on it. When I complete my studies, I should be able to spend more time at home. I think I can live from 3 to 6 months a year in Daofu, Tibet. That’s the advantage of being an actor, my working schedule is somewhat flexible. During those stays, there are a couple of things I want to achieve like making a few documentary films, capturing the true life, culture, tradition and history of Tibet and establish a school, to teach the children in the mountain region about arts and theatre.

I remember you said that if you did not become an actor you would work as a humanitarian, if you manage to make a name will you use this to help those in needs in Tibet?
Fortunately, I know some famous actors in show biz who are sincere Tibetan Buddhism followers. We are committed to use our fame and influence in spreading the awareness of the Buddhism wisdom and help the Tibetan people through our humanitarian effort. To build a school there is one on top of our agenda.