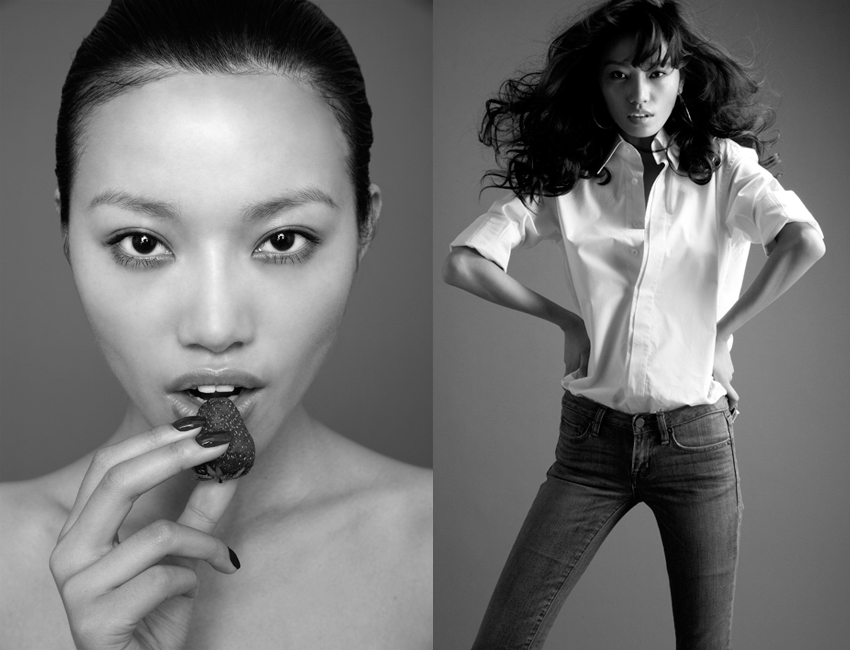 << >>
Photography and Interview by Matthieu Lunard.

Jojo” Qiu YuTing was born in the City of Yancheng, in China Jiangsu province. A “small” city of seven millions souls. She now lives in Shanghai, earning her life as a fashion model. Jojo graduated from Shanghai Dong Hua University in 2008, after 5 years. Model schools in China deliver national degrees, acknowledged as any other, even though most of the students never really get to work in the fashion industry. Today’s Chinese superstars Mingxi and Sun Feifei attended the same kind of school, and were later discovered by Elite Models to participate in the Elite Model Look international competition. They both ended up among the 15 finalists and then moved to Paris to start their now successful career. In 5 years Jojo has appeared in almost every magazine in China, grazing the pages of Elle, Vogue, Cosmo, L’officiel, Marie-Claire… She also appeared in advertisements for Chanel cosmetics, L’Oréal Skin Care and more. Today her Weibo account adds up more than twenty-one thousands fans.

“I’ve been doing this for 4 years now – everything started when I enrolled for model class at Shanghai’s Dong Hua University in 2003. My uncle who is a fabric tailor recommended that I’d come to Shanghai to participate in the school casting. Out of two hundred applicants only sixteen were accepted, I was part of them.  It never really has been a dream. More of an opportunity, because in China modeling is a way to be accepted in a good university – my high school grades were not really that impressive so I thought that it might be an easy way in. This is why I followed my uncle’s advice. I never had thought of being a model before that.  This University in particular has a very good reputation and the degree is quite valuable. It is definitely important to get a diploma, it proves a certain level of education.  I know that for you the concept of model school is a bit strange – usually girls learn their trade on the spot. I personally don’t think model schools are very useful for a model career, neither are they in general. I am not certain that the teacher’s lessons are so helpful, mainly because they don’t focus on our individual personality – it is more a group approach. However, a high level of instruction and knowledge is surely a good thing for a model’s self esteem.  On a typical day at school, we’d be taking pictures, learning to walk in high heels and being confident on the runway, attending make-up classes. We’d also learn how to behave in front of a camera. Also – because Dong Hua University is a famous fashion designer school – we’d have access to fashion design classes. In China, model schools do not only teach you about modeling – you also learn about painting, drawing, calligraphy, sculpture… A few teachers are former models, others are choreographers, ballet dancers or make-up artists. They usually all come from the entertainment business.  After graduation, each year, there might be one or two girls out of sixteen that would actually get to work as a model. Unless they have something very specific that fits the market, most of them would just give up.  Eventually, they could turn to something else and become fashion magazine editors, model agents or fashion event organizers.
I have been living for a while in Paris and in Tokyo but now I decided to come back to China – I had already spent eight months in Tokyo and three months in Paris but I was still in the middle of my studies and I wanted to complete my degree. I have to say, life in Paris was not so easy – I felt lonely – at that time Chinese girls did not have much work – nothing in comparison with nowadays! Liu Wen, Mingxi and Sun Feifei were the first Chinese girls to get so much international exposure.
It is true that it’s been really crazy for Chinese Top Models ever since!”