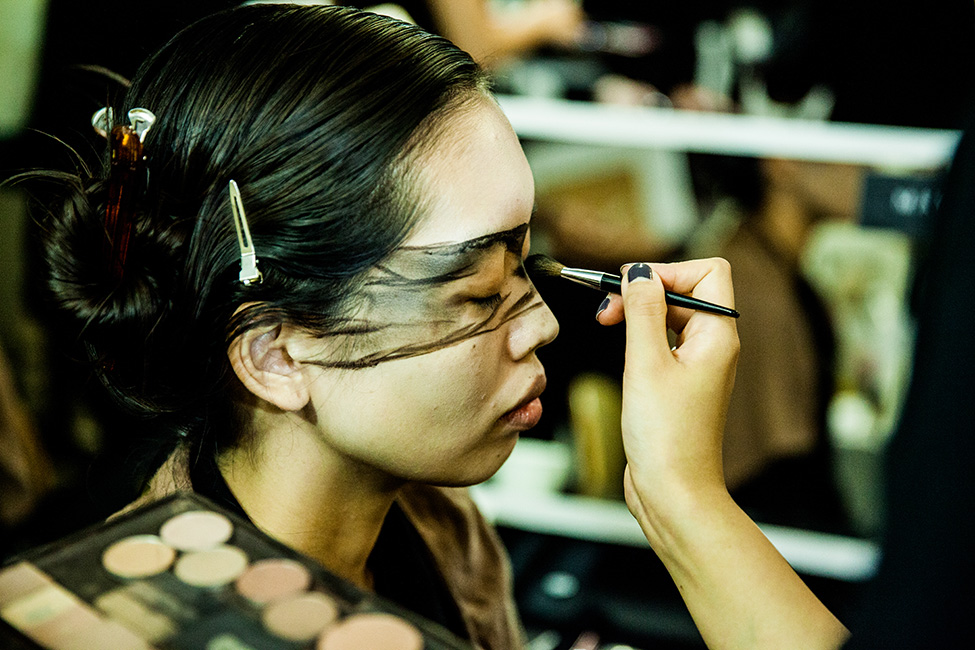 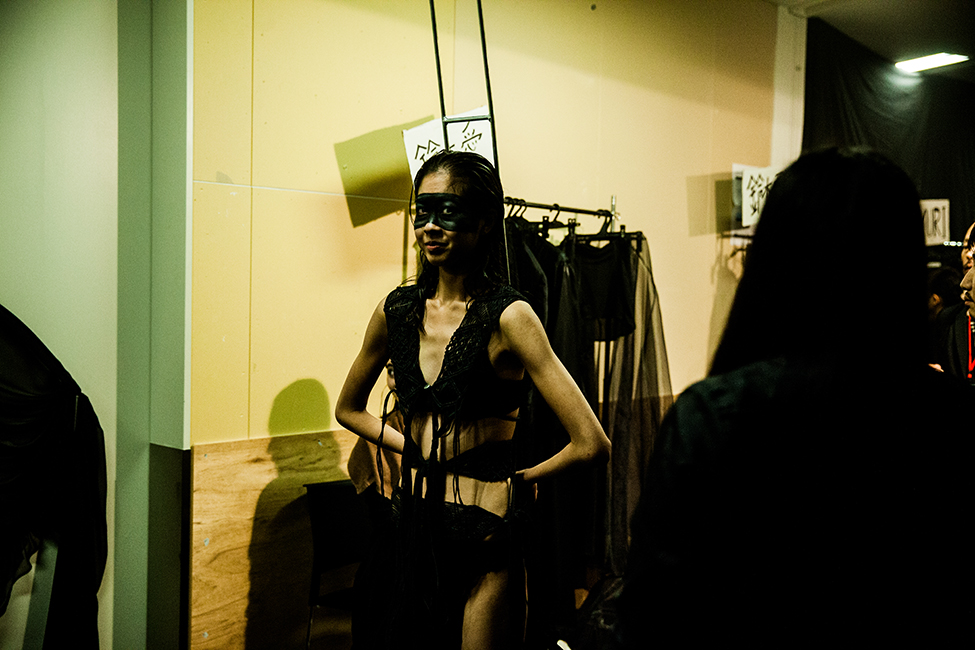 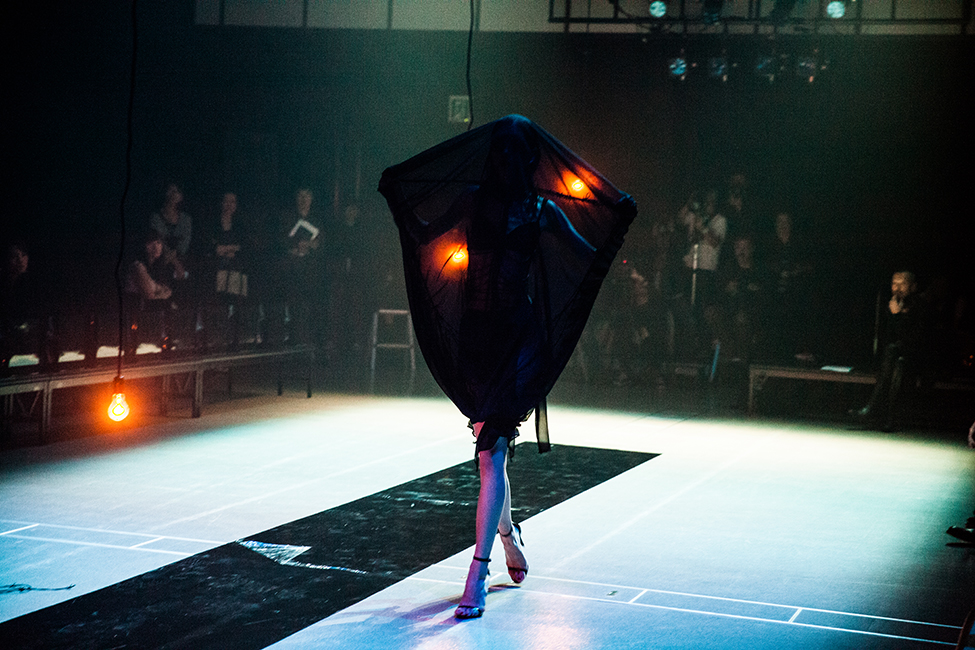 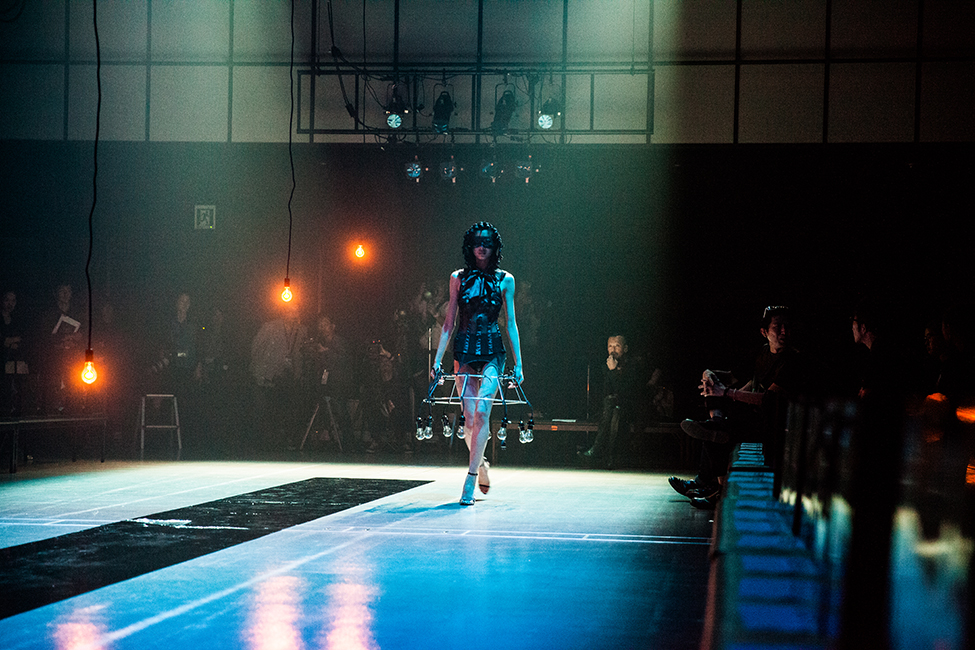 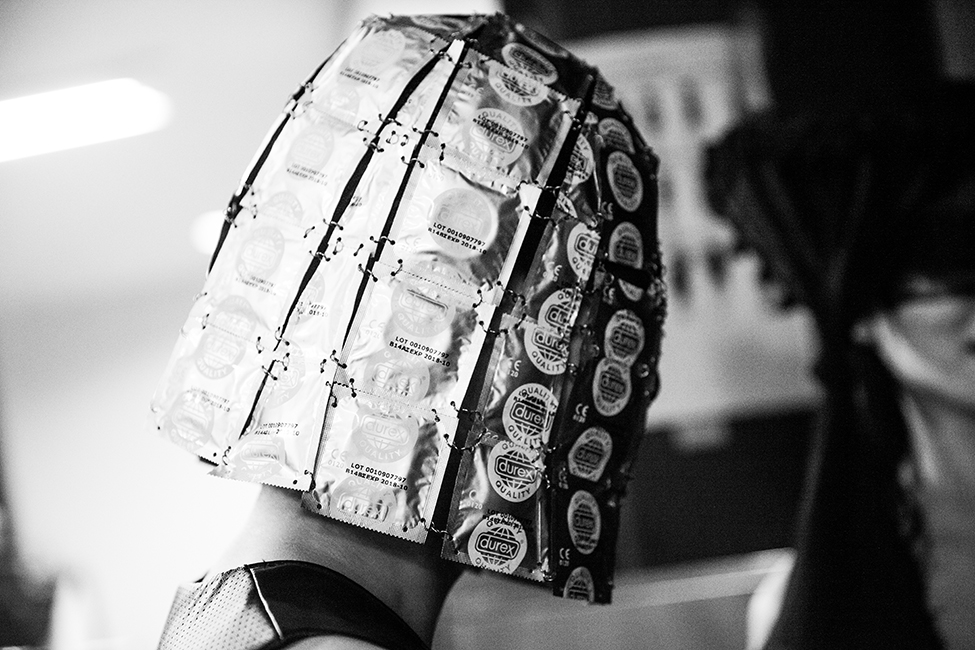 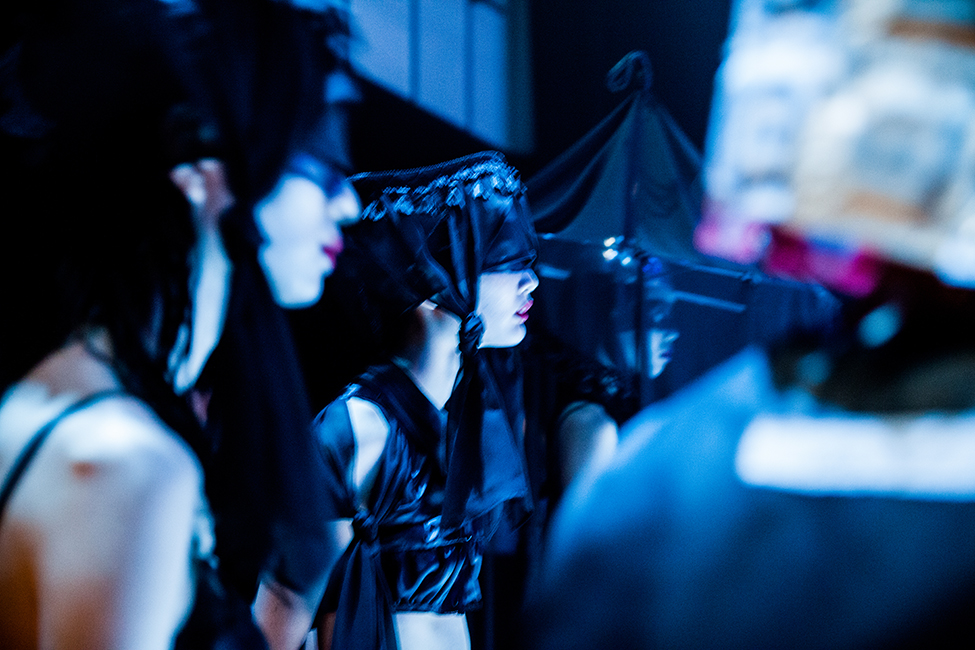 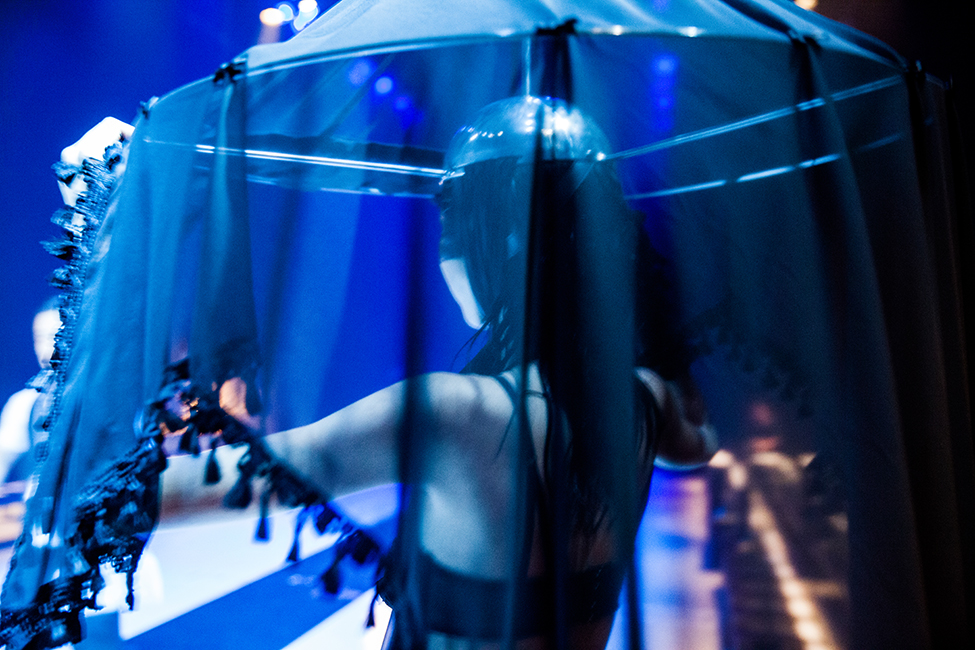 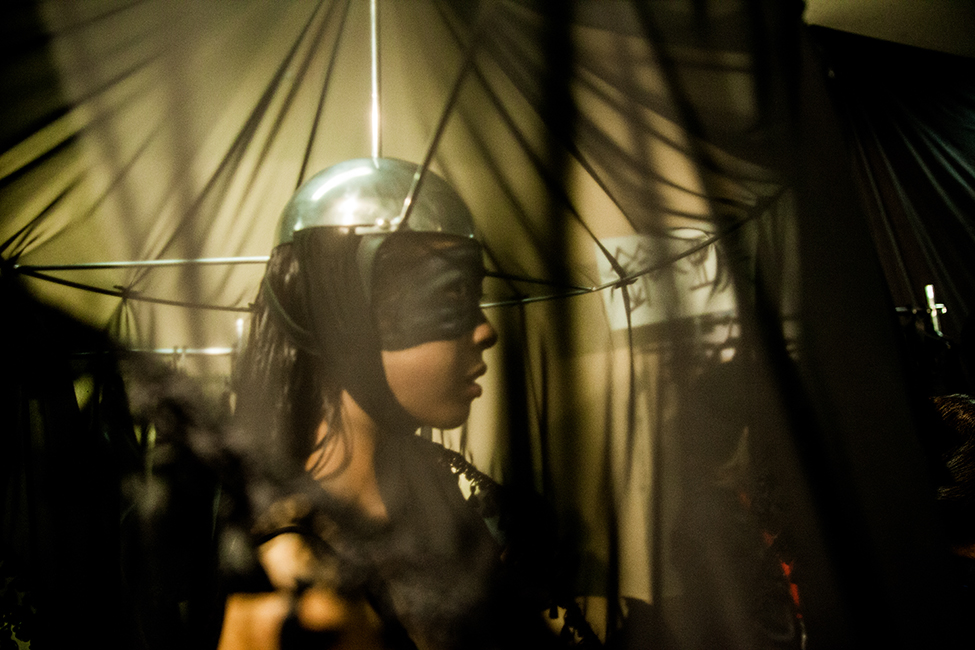 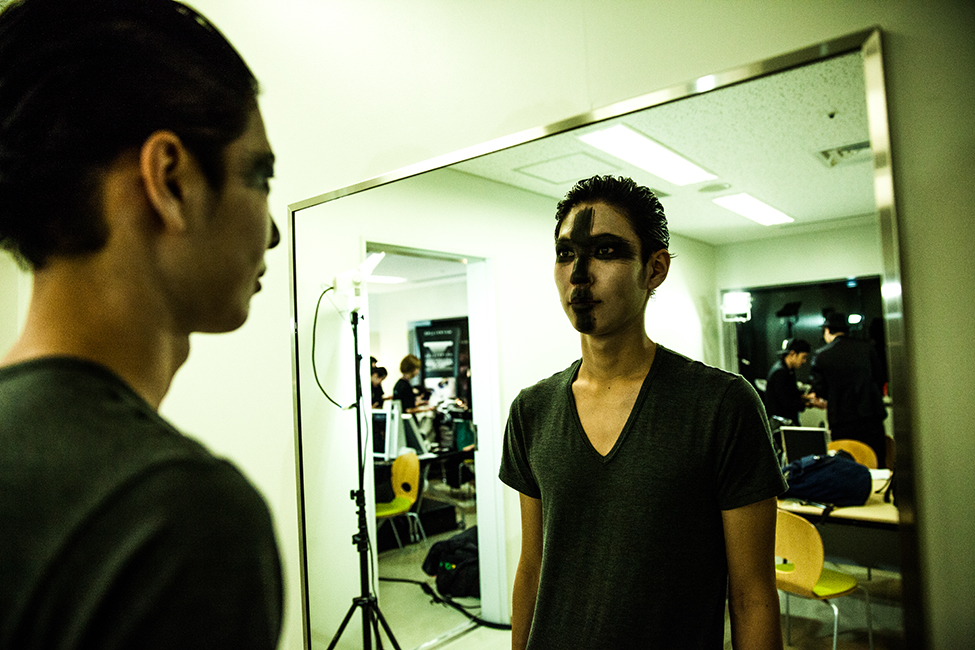 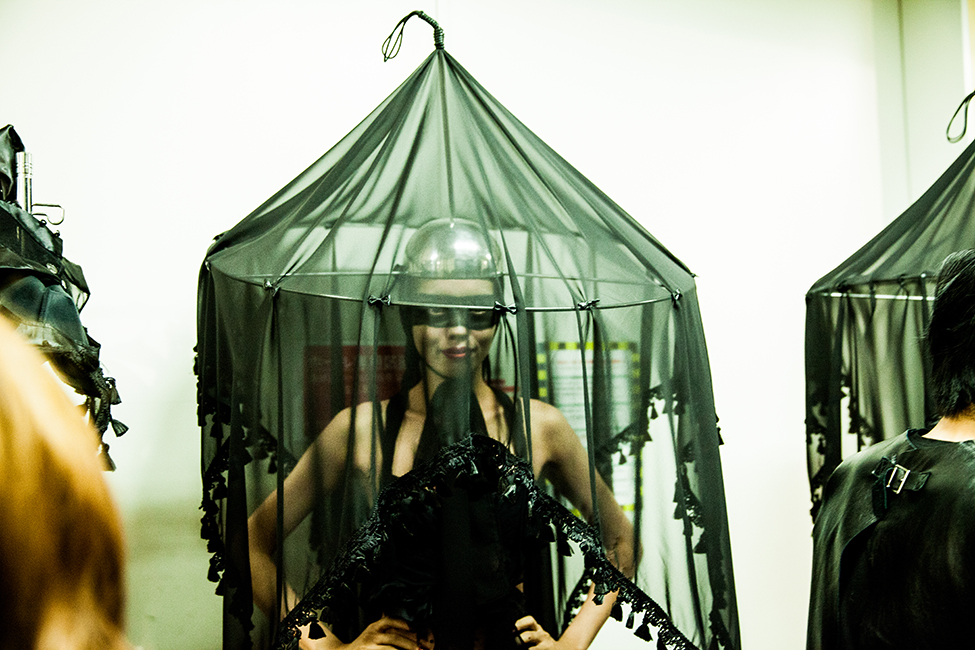 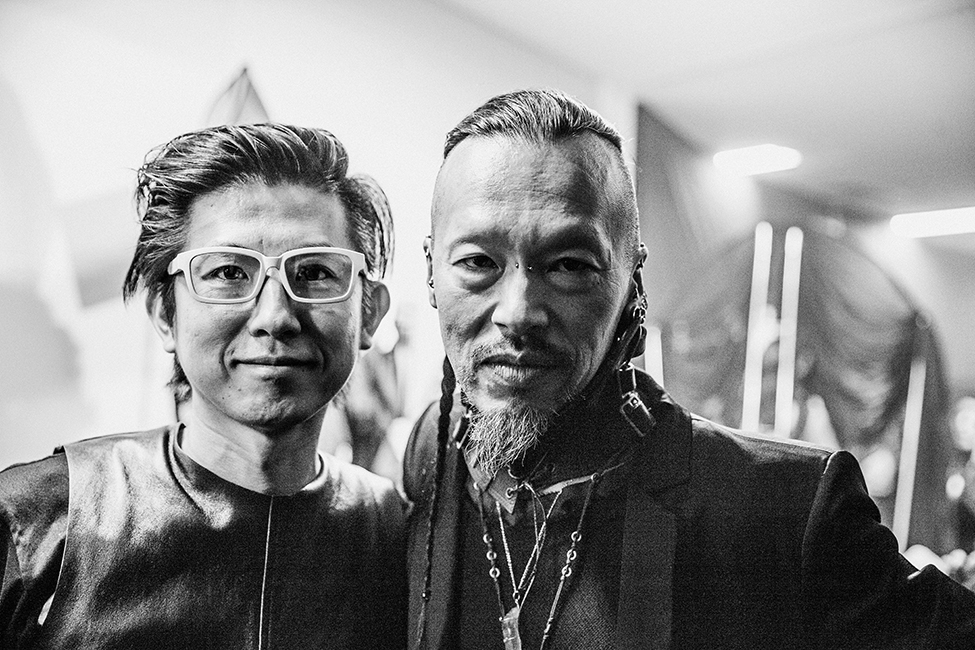 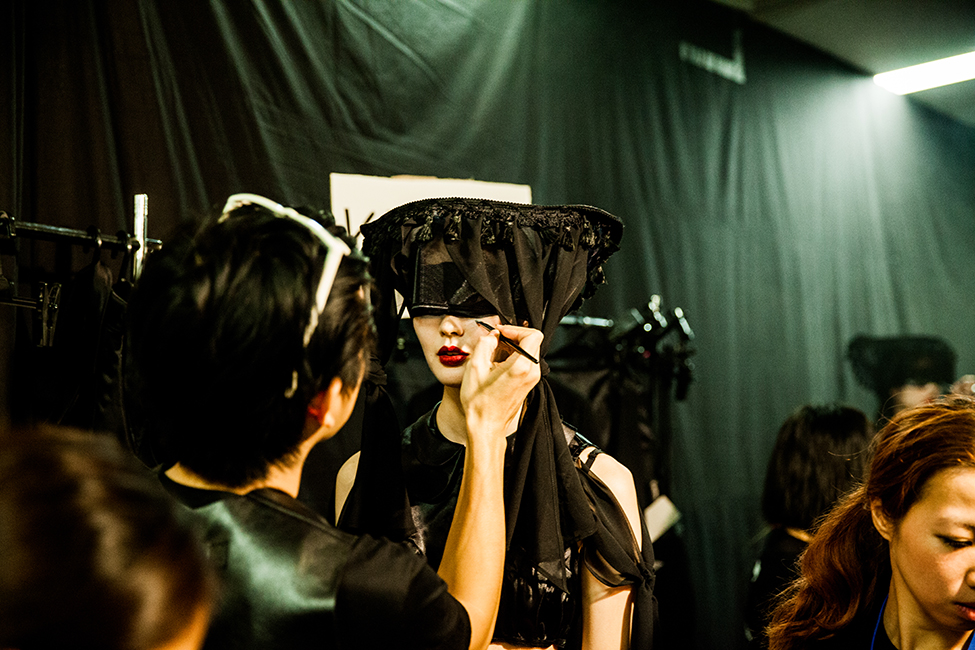 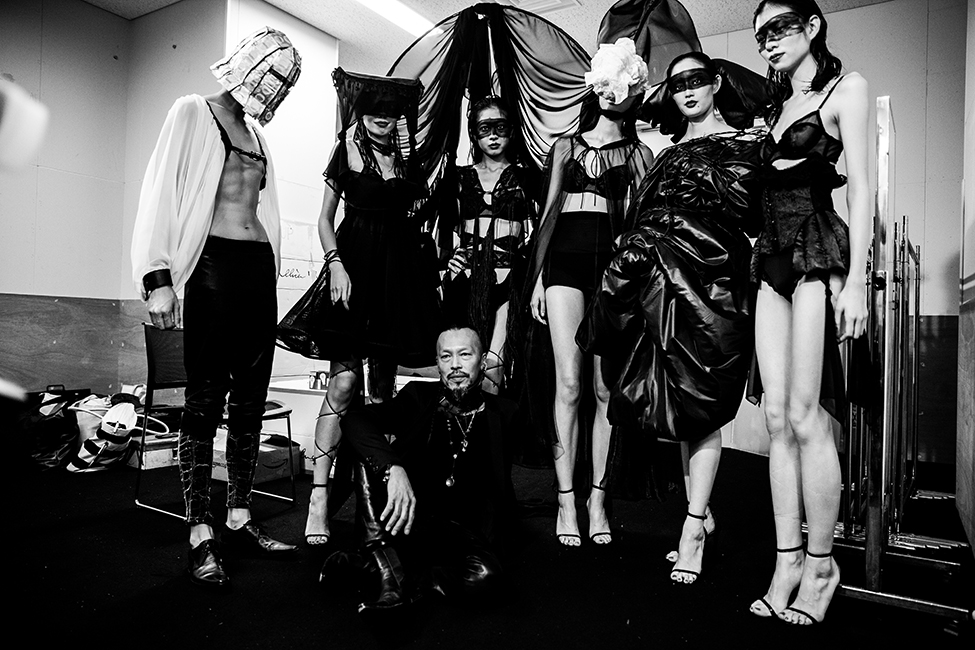 << >>
Photos and Interview by Jus Vun, Special thanks to Ilaria Alfano and Mika Nakanishi for the translation.

Alice Auaa - headed by designer Yasutaka Funakoshi - lives in the realm of the sinister fairy tale. Ethereal, deconstructed, black, the latest collection is an expansion of the label’s Brothers Grimm aesthetic into familiar fetish territory, with corsetry, sheer fabrics, masks and tasselled looks. Funakoshi has long appealed to the inner goth and the SS2015
collection stayed true to the fans, exploring the “duality” of light and shadow with black/white designs and, in one look, a literal lightbulb glowing against black fabric. Vampier than Loli-goth, looks also contrast pale, vampiric skin against flowing capes and gigantic lampshade-style headgear. Our gorgeous candid backstage shots give you a glimpse behind the curtain, an oddly serene portrayal of what is a frantic, adrenalin-fueled event.

JV: Tell the world about the Universe of Yasutaka Funakoshi. What curiosities do you have about the Universe that we live in and what would you like to explore in your work?
YF: The universe is a presence that gives me infinite gifts. It inspires and guides you to the point that in the end, only you can reach. It reflects the way that only in itself has led me to a place that can not be reached .

JV: You were born in Kobe. What was your childhood like living in Kobe? What were your early influences and did it have any influence on your fetishist and gothic designs?
YF: I was a child who used to tinker with machines, daydreaming and clay modeling. I also disliked dark places and I was reluctant to be in uncomfortable environments.

JV: Prior to 1995, before you launched your brand, you were designing costumes for musicians in Osaka. What kind of musicians did you design costumes for? What kind of music do you listen to usually?
YK: I first started to design for what we call in Japan “Visual Key” bands; from Indies groups to major bands. However, until now I didn’t make designs for individuals.
As far as the music I listen to, I can say that I don’t listen to only one genre in particular. Usually, when I design, I do not listen to music. However, when I feel lost or get stuck in what I’m doing I listen to 80’s music.

JV: In 2012, you were chosen to participate in Mercedes Benz Tokyo Fashion week. How did this come about (happen)?
YF: In the past, in 1996, they had fashion week in Osaka. Back then I showed 4 seasons worth of major collections. The reason I came back on to major ground in 2012 is because I wanted to show my creations worldwide.

JV: The world we live in is abound with dualism – male & female, love & hate, war & peace, active & passive .Your designs are based on the concept of duality – light & dark, beauty & ugliness. This really shows in your work. Did you get your philosophical inspiration from Taoism or somewhere else?
YF: I wasn’t conscious about it before. However, in the universe there is light and also shadow. Of course as you mentioned, love and hate as well exist. People might unanimously say that my creation represents the dark-sided culture, but it’s only an emphasizing birth.

JV: What is your relationship with the color black?
YF: Black wraps everything; it’s an existence that heals gently.

JV: Have you ever met Lada Gaga and how is she in person? How did you feel when Lada Gaga started wearing your designs? Who would you love to see in your clothing?
YF: I collaborated with Lady Gaga twice to create her stage costumes but unfortunately at the time she was asleep.
For me Lady Gaga is like Venus because she had interest in my work and gave light to a small Eastern Maison’s creations.
Everyone who is interested in my creations and is able to express empathy with them I would be happy to have them wear my collection.

JV: Where do you usually hang out in Tokyo and have you ever been to the underground fetishist events in Europe and abroad?
YF: Unfortunately, I’m based in Osaka and when I go to Tokyo it is only for work and no play!
I attened some underground parties that were held in England in 1994 and it is for this reason that I started alice auaa.

JV: There is a certain beauty, mystery and eroticism in the concept of incommodiousness, discomfort and suffocation. Tell us what it is that attracts you to see people put in chokers and leather masks.
YF: It`s literally suffocating, the moment when something hot and bitter overflows from deep within one’s throat.

JV: You really know how to put on a show at fashion week and I really appreciate your showmanship. Your runways and collections are always otherworldly. Congratulations.