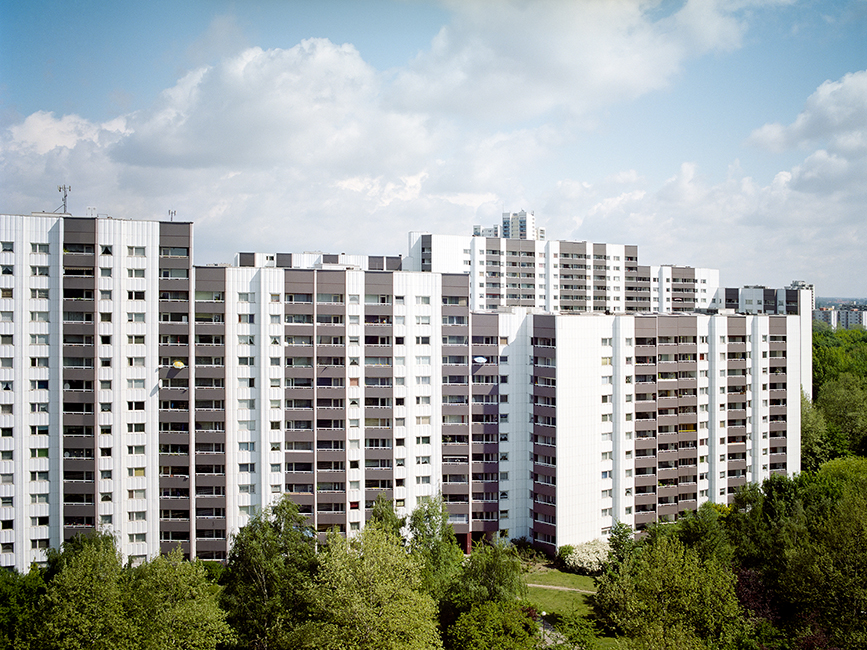 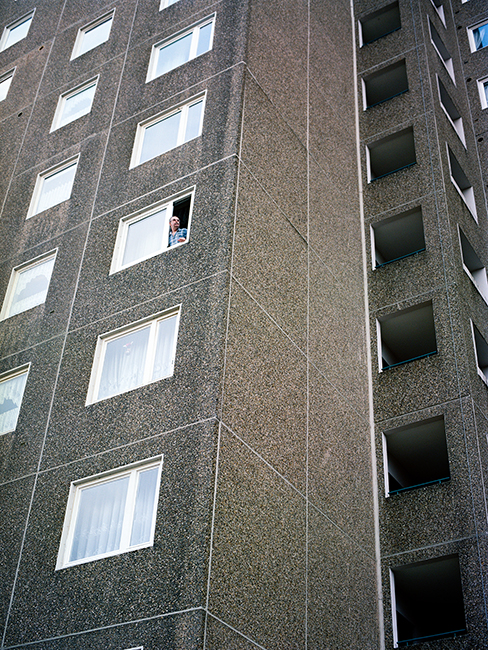 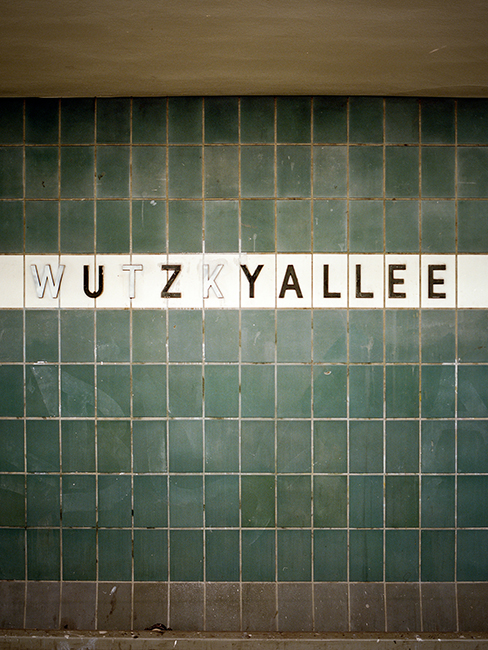 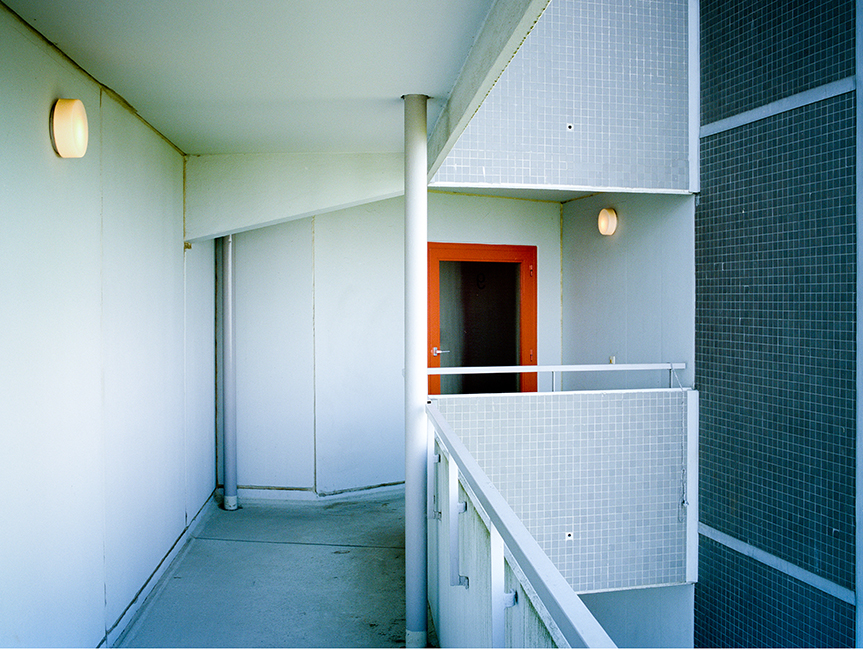 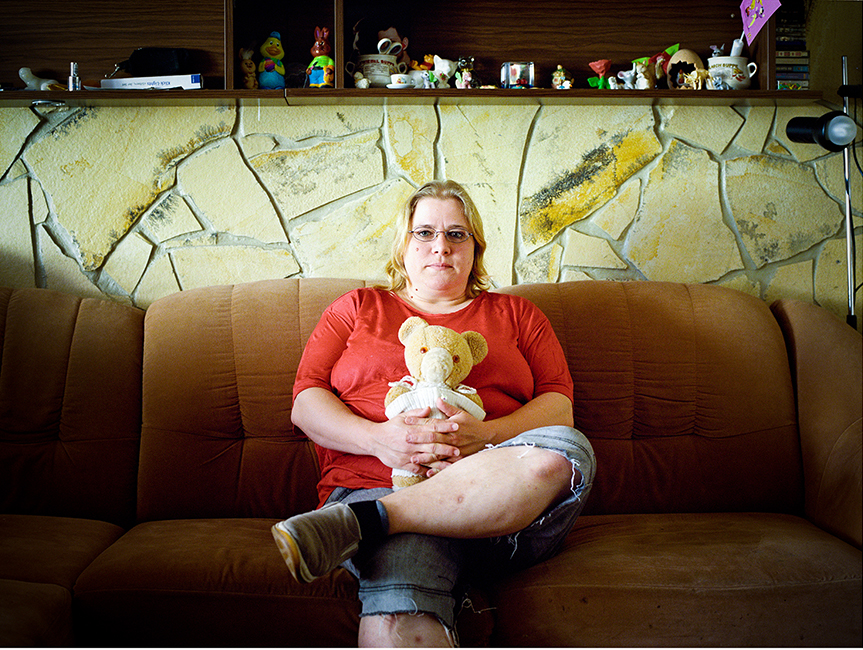 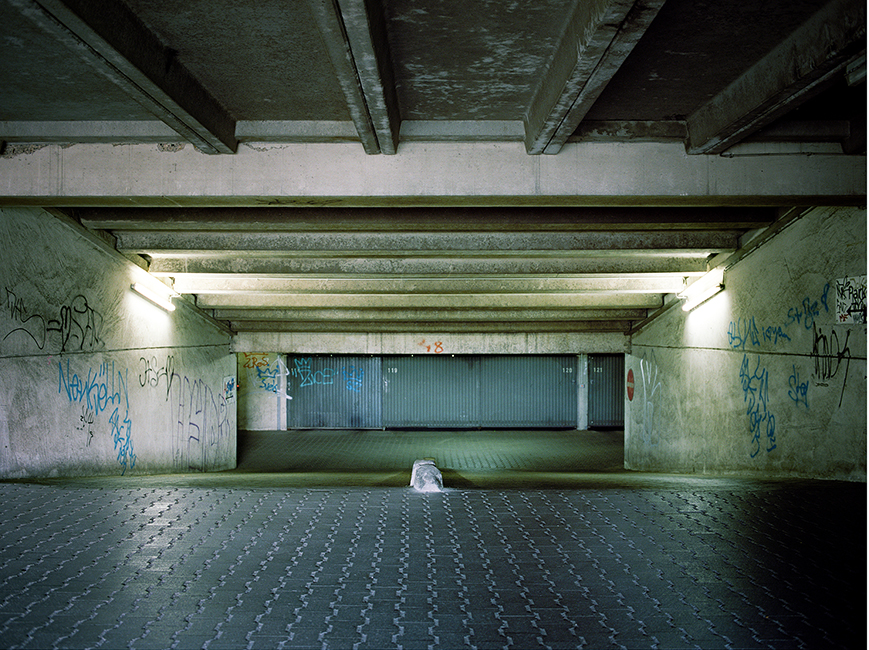 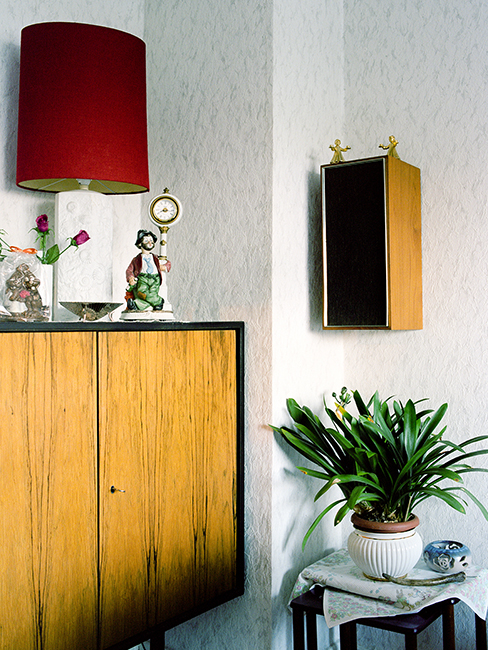 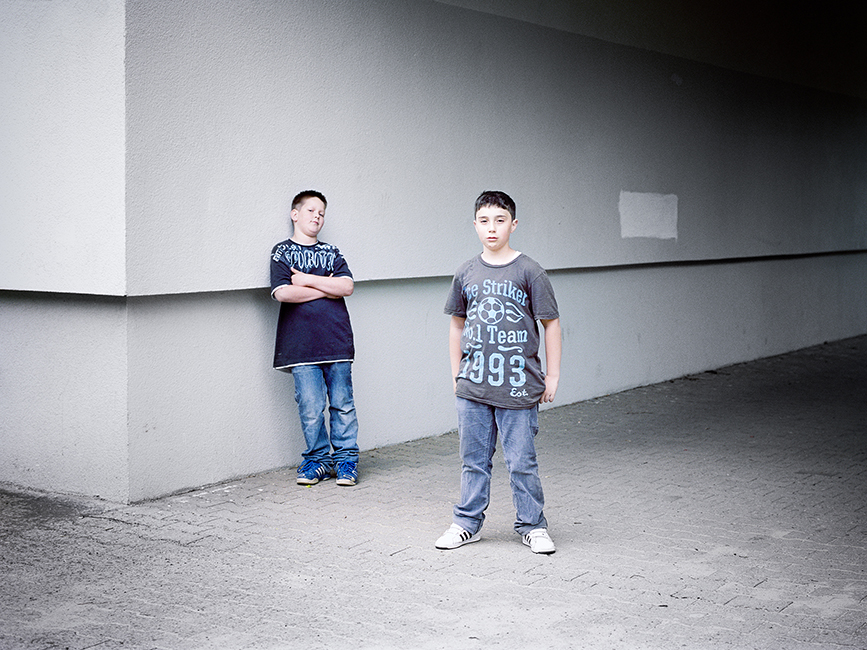 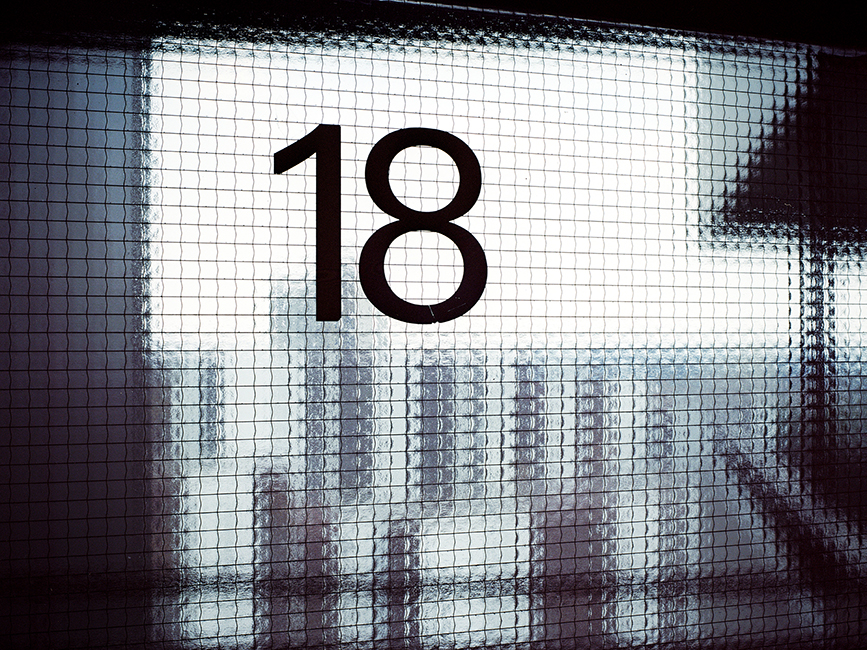 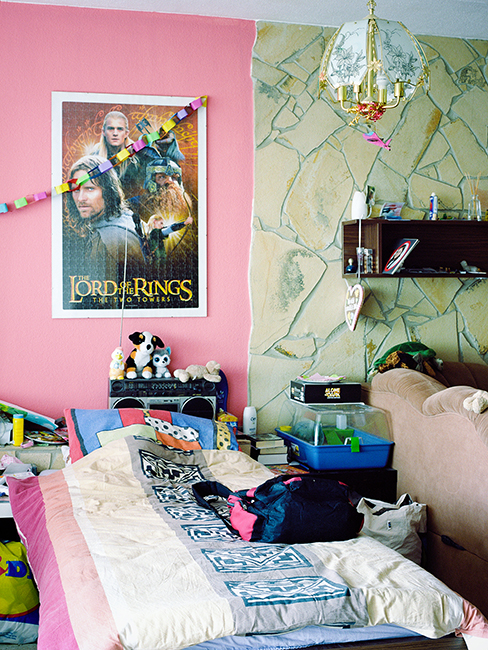 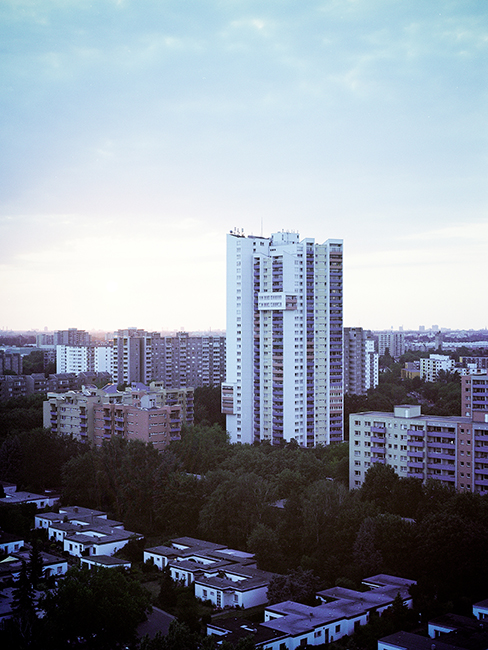 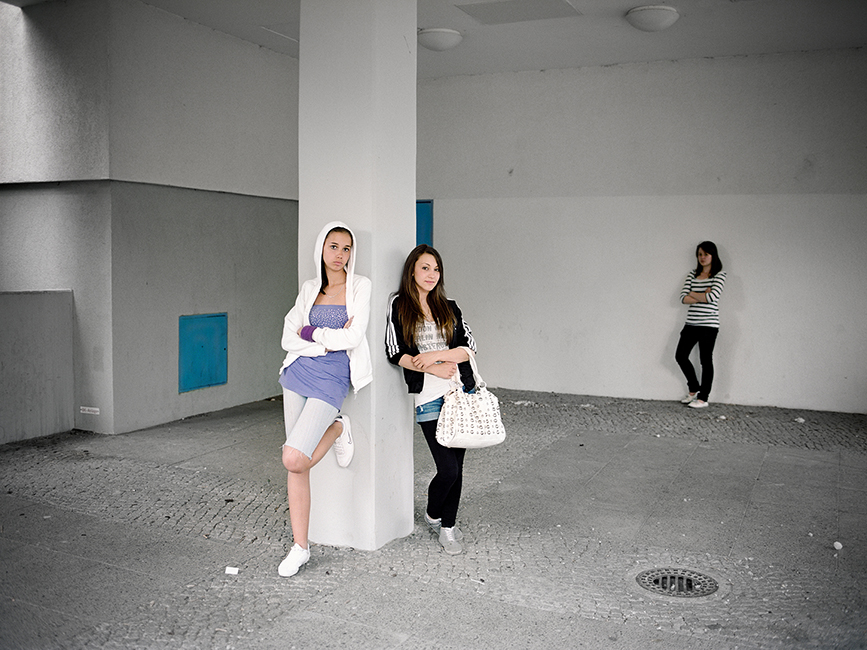 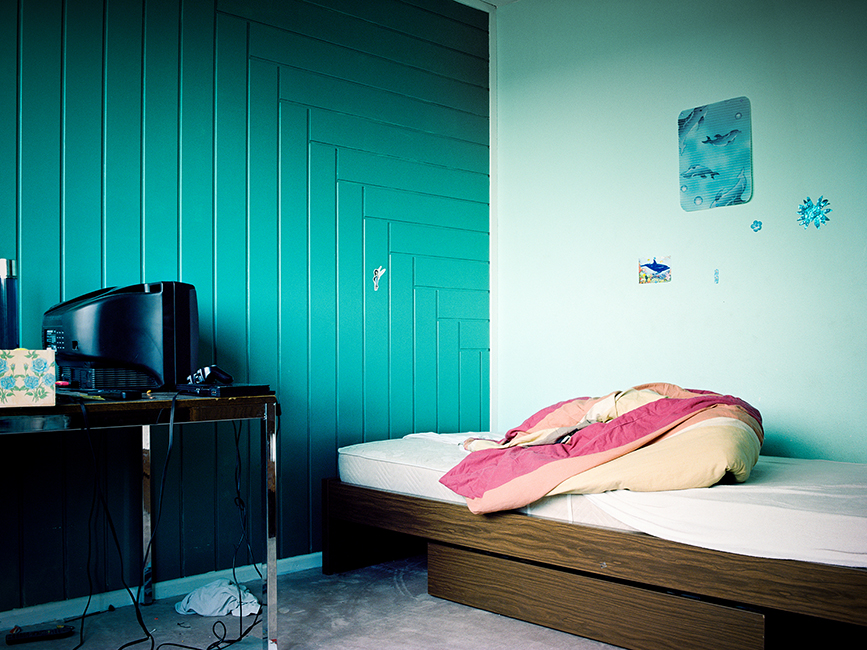 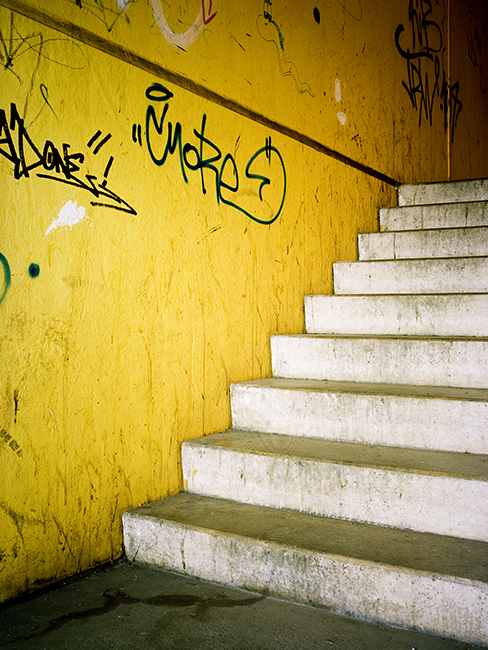 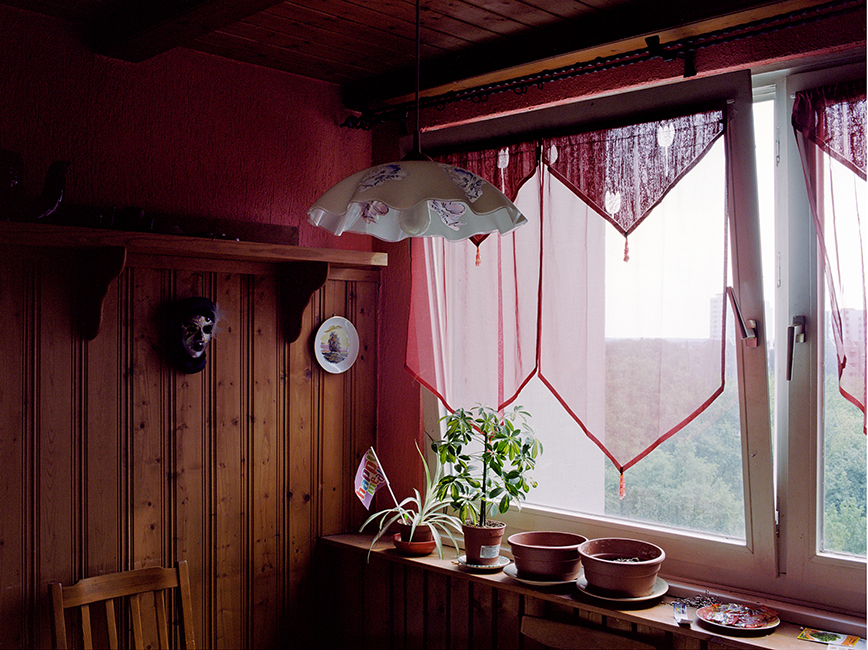 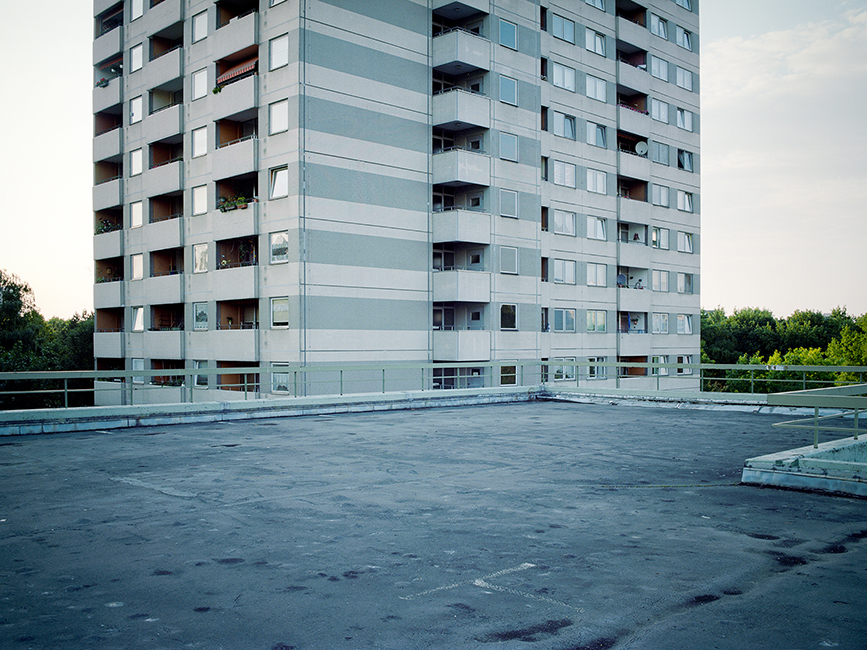 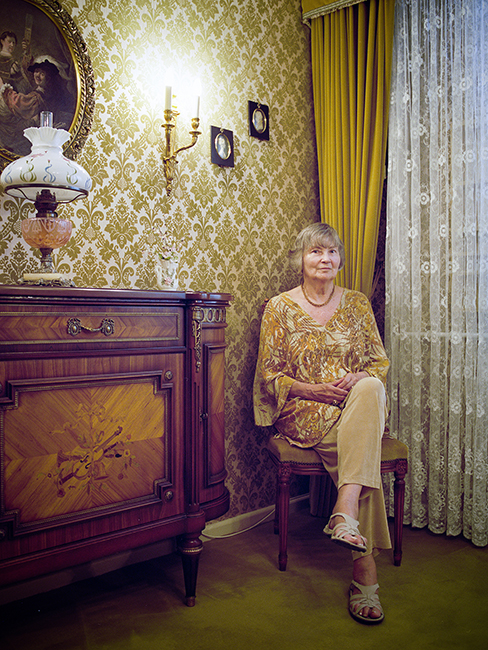 German photographer Lukas Fischer talks to Aserica about his photo series on Gropiusstadt, home to Germany’s most famous junkie Christiane F in Berlin. Gropiusstadt, named after legendary Bauhaus German architect Walter Gropius, is an enormous modernist style concrete ensemble covering 2,66km2 with a total population of 36,000 people and was completed in the 1960’s. In Gropius’ own words the massive bulk designed in a semi-circular shape aimed to make a living area that was “orderly and calming through unity”. Fischer talks to us about his time photographing this notorious area in west Berlin.

ML: Just looking at your work gives a real insight into Gropiusstadt, can you please tell us what drove you to shoot a story about it?

LF: I grew up in a small village in the countryside, near a bigger town called Hanover. Every day on my way to school I passed the “Ihme-Zentrum”, one of those 70’s modernism residential and shopping projects, and I always asked myself how it would feel to live in there. For some reason, I never attempted to enter the towers, perhaps because the ground floor shopping area was frightening enough. Years later while studying in Berlin, I was working on a university project and had an appointment in the centre of the Gropiusstadt. At that point, I hadn’t heard about it but I was massively impressed by the place. All of my old questions about these types of residences popped up again, but now I was old enough to explore them and try to get inside.

ML: After the release of the book ‘We Children of Bahnhof Zoo’, followed by the gory biopic Christiane F, do you think the modernist Gropiusstadt became symbolic of a glamorous underworld of drugs and prostitution in the 80s?

LK: From an outsider’s perspective, I would say yes. The Gropiusstdt definitely became a symbol for the failure of these huge modernist style projects and the success of Christiane F.’s book made it known beyond Berlin’s borders. For a while, part of the Gropiusstadt was one of a few “no go areas” in Berlin. It still has a bad reputation, even though it’s getting better. When I started to photograph in 2011 a lot of people warned me not to go there, but in my experience, it is not dangerous at all. Of course, you meet a lot of youngsters - they are living there after all! On my visits, I met an old man, who worked as a bailiff in the 60’s, 70’s and 80’s and often had to deal with Christiane F.’s parents. He told some interesting stories about the development of the whole area that offered a refreshing perspective. He and his wife were the first inhabitants of one of the first buildings and still live in the same flat today!

ML: What kind of impact does Gropiusstdt represent for Berlin youth nowadays?

LK: None. A few years ago, another huge 60’s development, the “Märkisches Viertel” became famous because some Berlin rappers grew up there. The attention moved over.

ML: Is there a stigma attached to the residents of Gropiusstadt from other Berliners?

LF: I think it depends on who is asked. For all the people who read Christiane F. in the 80’s, maybe yes. For all the younger generation of Berlin and those who have recently arrived at the city, I’m pretty sure it will mean nothing. They have probably never been there or even heard of it.

ML: When I look at today’s suburban utopian architectural projects from the 60’s that were destined to low middle-class people with a mix of professional categories, however, they brought a comfort that most people never had before (hot water, separated rooms for children, elevators…) I realise that in some countries like France those projects quickly became ghettos, an outcast community with extreme poverty and violence, would you view Gropiusstadt in the same category? Are the crime and poverty rates higher in such neighbourhoods than others in Germany?

LF: Yea and no. It’s not comparable to the things you see and hear about from some of the French “Banlieues” (I haven’t been there so far), but the fact that most of these areas are far from the city centres, bringing almost no infrastructure, besides the one big obligatory shopping mall, makes them unattractive for those who are looking for a hip and urban surrounding. The result is obvious - especially in poverty rates.

ML: Your interior pics challenge the perception of what one might imagine a ‘ghetto neighbourhood’ looks like - it seems that people live there in cleanliness and order, even public spaces don’t look run down, apart from the odd bit of graffiti, it looks like a very liveable place. Was it your intention to show this side of the building and its inhabitants and challenge outsider perceptions? Or did you deliberately choose interiors that would antagonise the general perceptions people have of Gropiusstadt inhabitants?

LF: My first intention was mainly to have an open view at the place, trying not to bring too many prejudices. What I found was an impressive variety of ideas and visions of the inhabitants for their life. When the Gropiusstadt was build, it was a dreamlike temple of modernism for all those who moved there. Coming from run down old housing structures, here they found automatic heating, their own toilets and bathrooms in the flats and elevators - and all this in a modern, futuristic setting. On my walks through the area, I met a lot of older people, most of them living there since the beginning in the mid 60’s. They still remember the heyday of the Gropiusstadt and try to keep the essence of it alive because they still enjoy living there. On the other hand you have a huge group of inhabitants with different heritage and backgrounds, following other visions and ideals that often clash with those of the elderly residents. In my work, I tried to find and show both sides.

ML: Do you consider your work to have a social agenda? Or would you say you try to get beautiful images through places that are generally not considered attractive?

LF: In all of my work I try to follow specific societies and often social agendas. Working on the Gropiusstadt was mainly a fight against my own prejudices and resulted in the idea of scrutinising prejudices in general. The contrast of what I’ve heard about it in the media and what I’ found myself was overwhelming. It is about showing my view as an alternative to the “No-Go-Area-Mainstream” belief.

ML: Was it difficult gaining access to the people’s private spaces? Is it that you know someone living there already that you were able to get up close and photograph people?

LF: When I started the project I entered the place as a foreigner. Fortunately I lived just 25 minutes away by underground so I went there almost every day over the course of a few months. Whenever I came across someone who seemed interesting I tried to get in contact and found most of the people were very open-minded and interested in my project. Also almost everyone I spoke to liked living in the Gropiusstadt and therefore had an interest in showing an alternative view of it. In most cases it took some time and several meetings to build up confidence, but in the end, it worked out well.

ML: In your opinion did Walter Gropius utopia, succeed in making an area that was “orderly and calming through unity”, either in the past or now in the present day?

LF: No. But I don’t think this is the fault of Gropius, who by the way was not included in the final planning. I don’t believe that planning and building megastructures for thousands can ever work out, all around the world you can see examples that prove this. I believe in the organic growth of structures with all their necessary coincidences.