Francesco Merlini is taking us through the biggest Voodoo market in the world, located in Lomé, Togo. 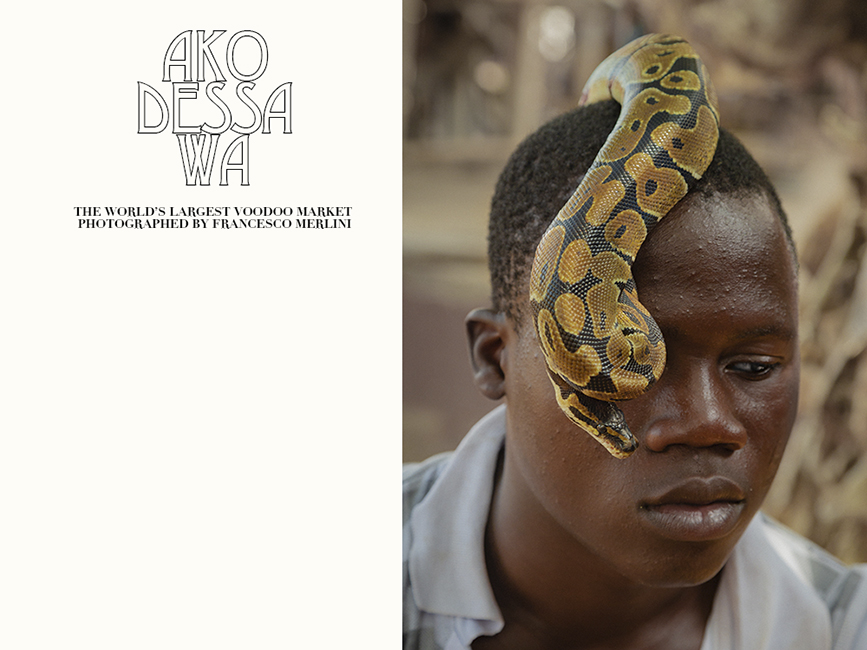 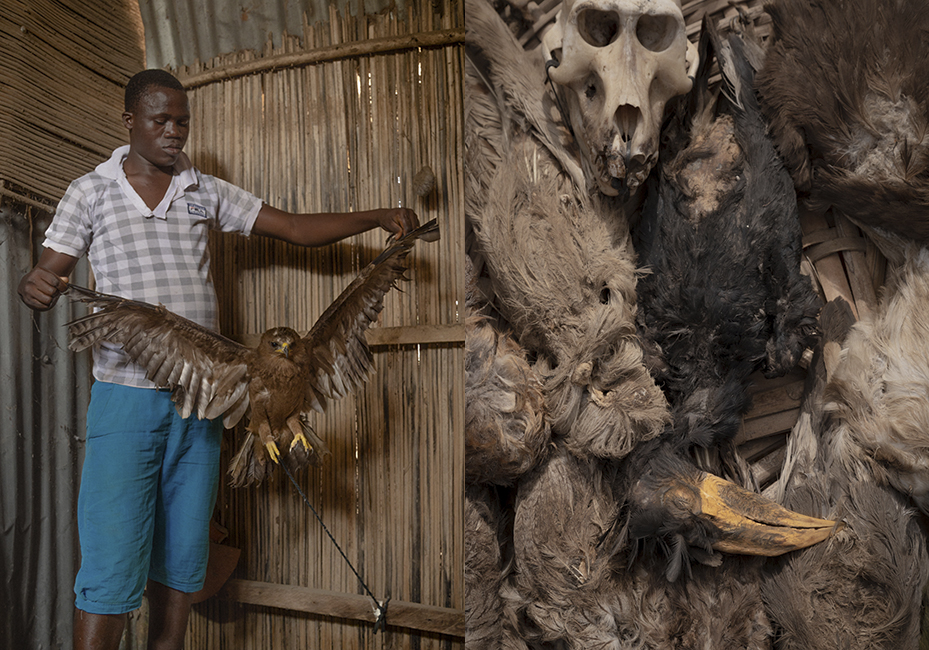 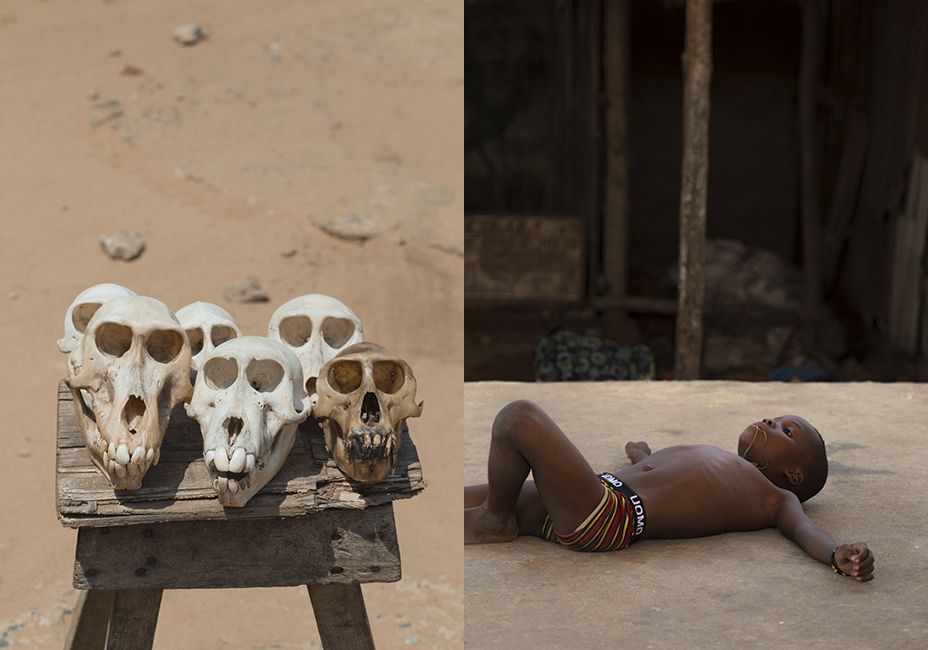 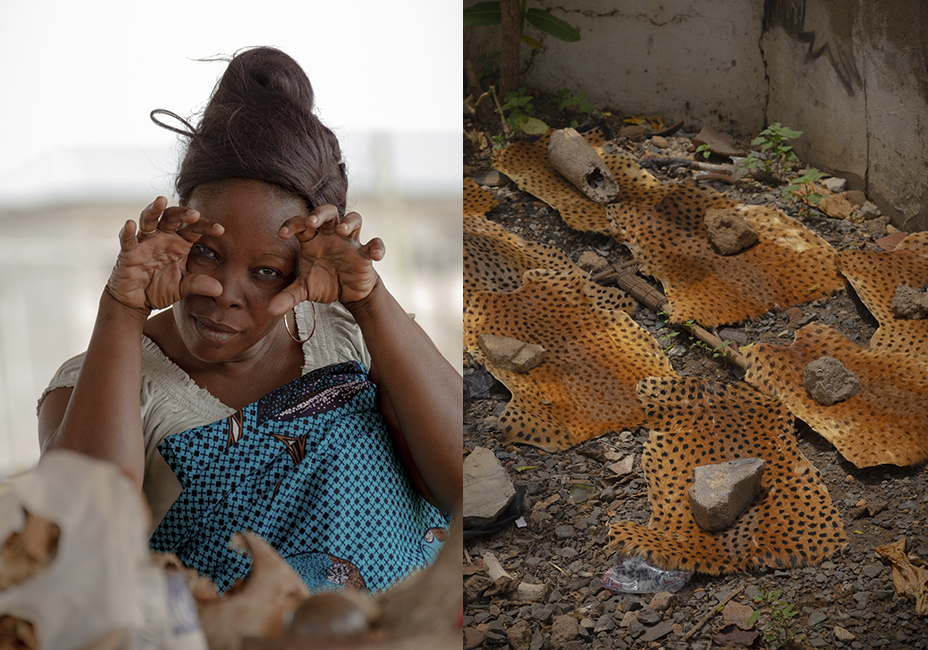 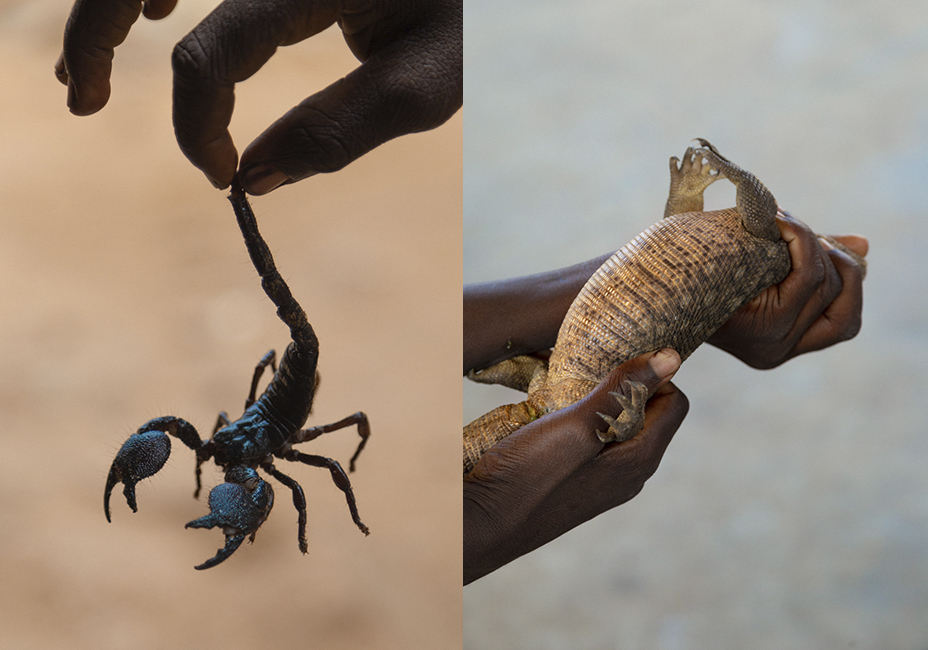 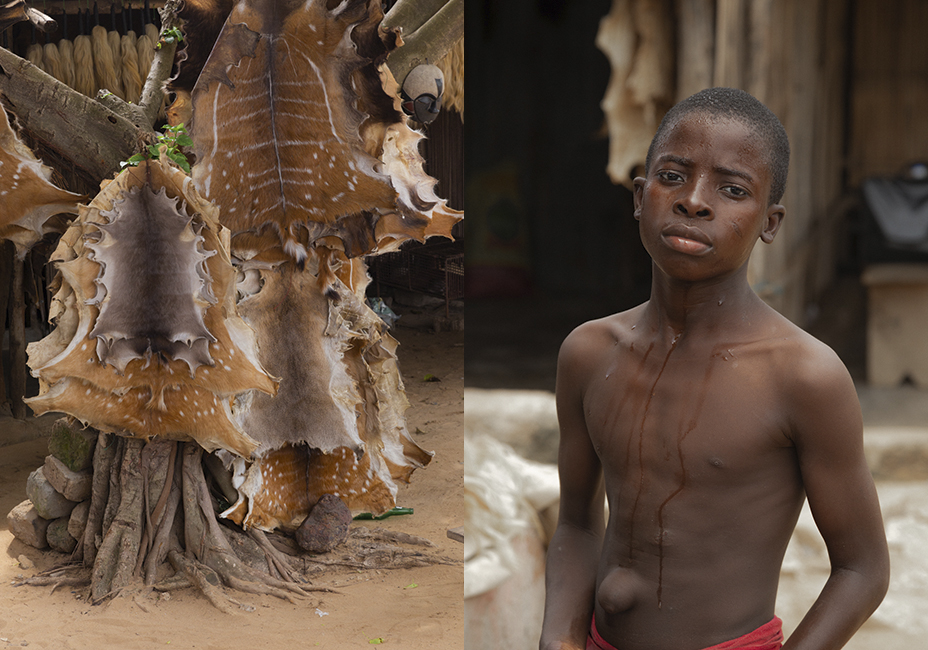 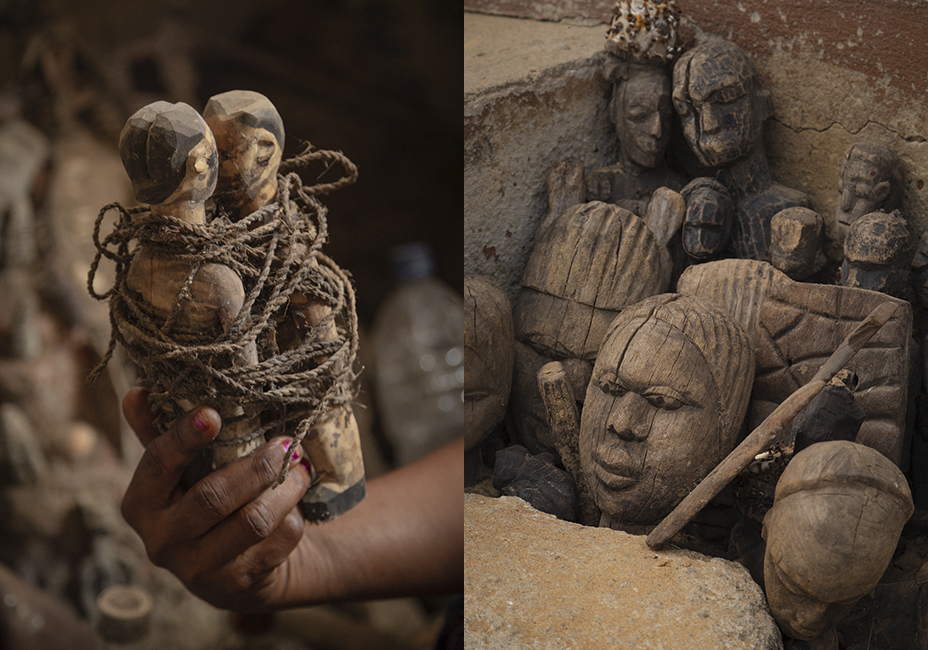 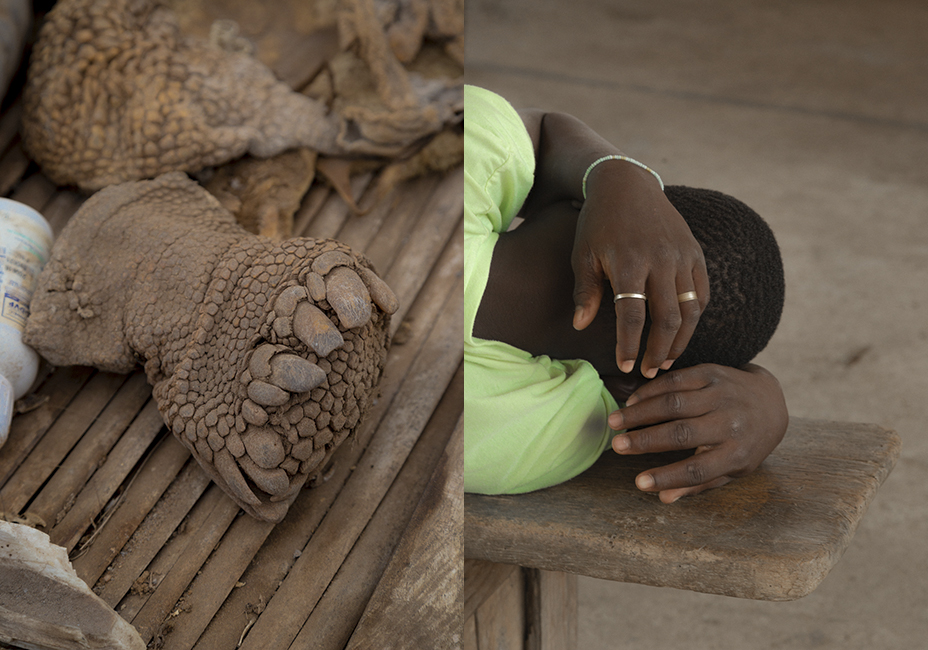 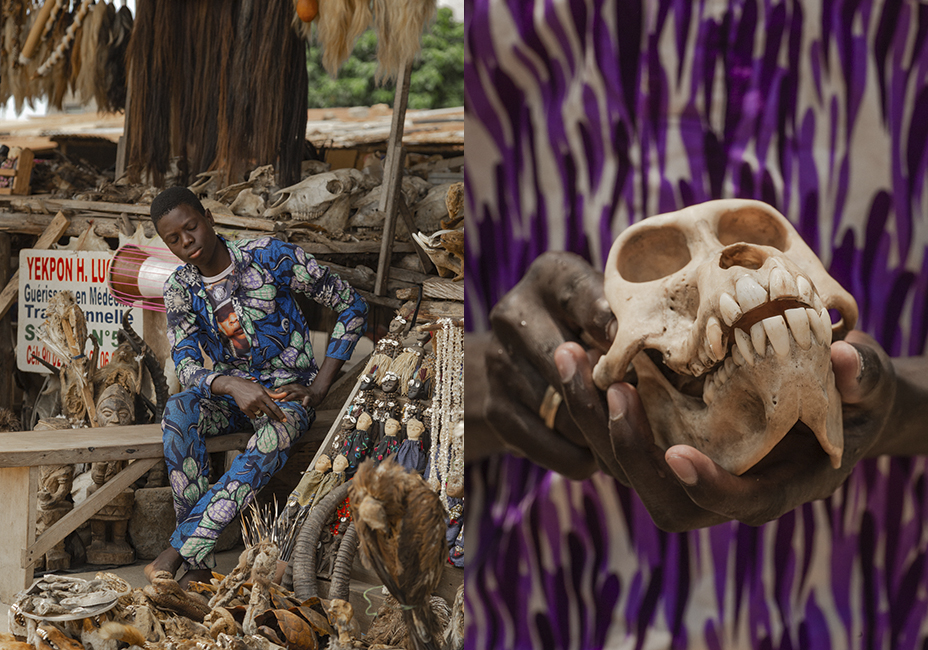 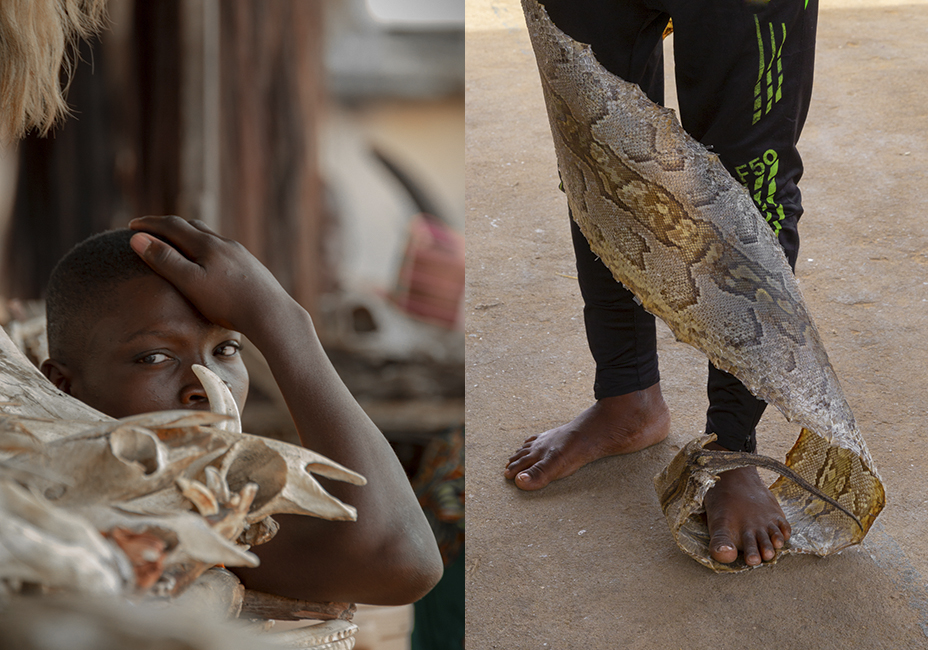 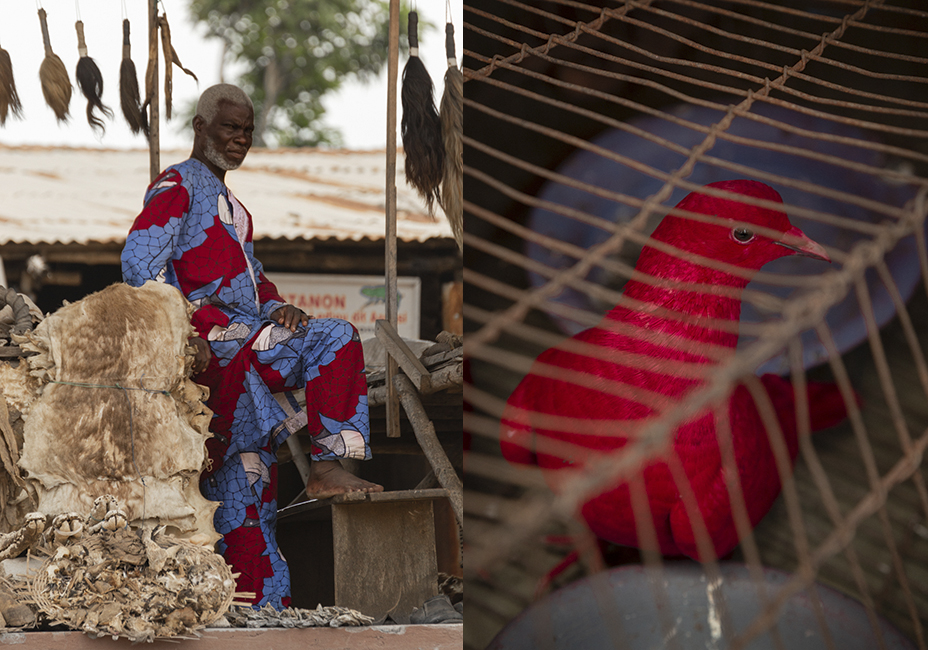 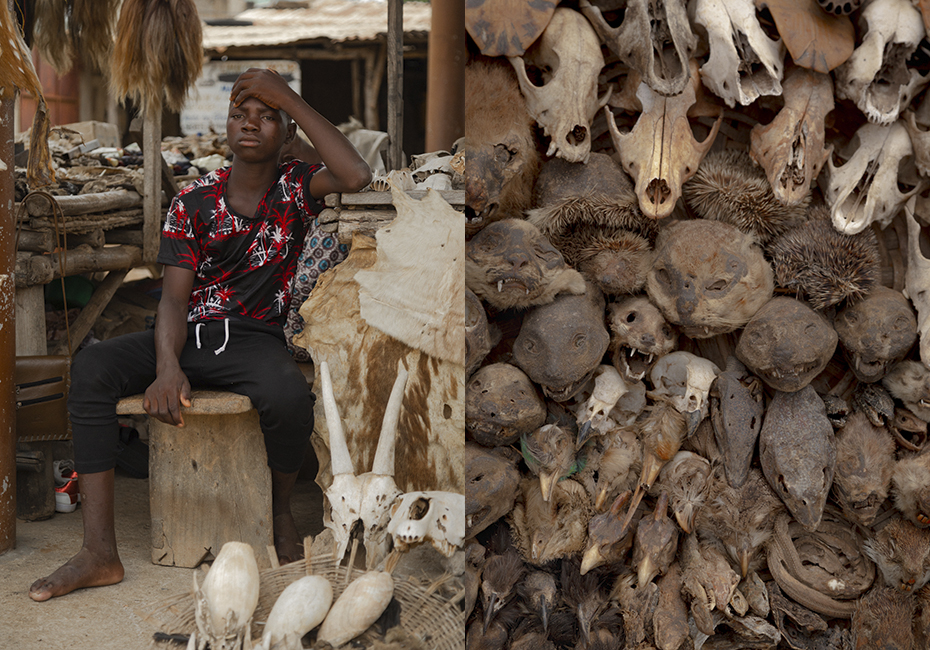 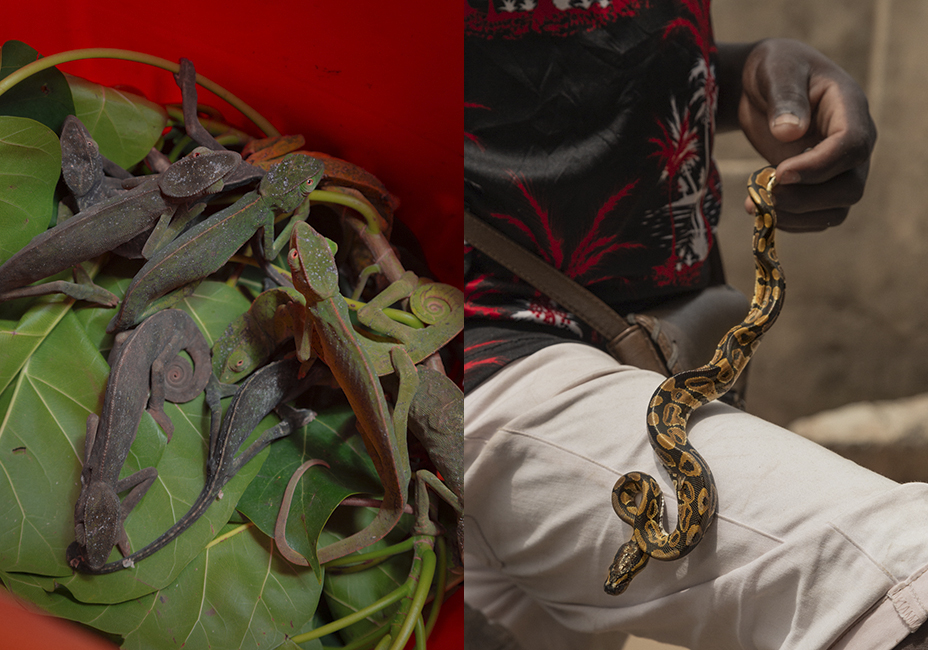 In a suburb of Lomé, the capital of Togo, on the way from the city centre to the airport, once arrived in a big roundabout, if you take a small street that twists and turned among crumblings buildings and improvised workshops, you'll find yourself in front of a rusty iron gate. On the other side, a big sandy yard with two big metal awnings protect from the scorching sun men, women and kids who, lying and sitting on benches, wait for customers to sell their goods: talismans, charms, skulls, bones, heads, horns, skins, paws, shells, feathers, spines, herbs and living animals. This is not just a market, this is the World's largest voodoo market, the Akodessawa Marche des Feticheurs.

The goods on sale are mainly parts of animals including snakes, chameleons, cats, dogs, turtles, scorpions, crocodiles, rats, monkeys, antelopes, elephants, parrots, owls, hawks, big felines, hyenas, porcupines, starfishes, sheeps, horse, warthogs, baboons, goats, bats, rams, buffalos and fishes, all the constituents for voodoo fetishes, rituals and traditional medications. Other important ingredients are alcoholic beverages and soft drinks but the most important one is the blood, ingredient you'll not find here at the market since it has to be the outcome of a sacrifice that, before every ritual, is essential in order to activate the voodoo power. Voodoo is a practice through which humans try to domesticate nature in order to unfold it, admitting the impossibility of total control. Sacrifice is the necessary tool to start any dialogue with the world of non-humans. While in Christianity blood is evoked as an idea, in voodoo, blood is experienced as a sensitive experience and as such, it must contain within it the vital energy of the victim.

A fetish is made of animal elements mixed with minerals, industrial products like perfume or soda and "ama": herbs, roots, leaves that, in according to their combinations, produce different effects. Components are selected not only because of their power but also in according to their aspect and shape and every "sofo", the voodoo priest, has different recipes that will produce uniques voodoo fetishes. These objects are devices able to create social relationships and consequently to transcend its apparent immanence, incorporating values and powers that are foreign to the human will. A fetish is a fixation of an unique event that gives a new identity to elements that are originally heterogeneous. It can be God, but also human, plant, animal or material. This depends on the ritual and the situation where the fetish, receptor of a set of vital breaths, is activated and strengthened.

All the people who work at the market are from Benin, cradle of the modern voodoo cult, the "Gorovodu" that has spread to all the countries bordering the Gulf of Guinea: Benin, Togo, Nigeria and Ghana. The right to have a stand inside this market is usually inherited from the father and it's not infrequent to see two or three generations of the same family around a stand. Usually the older one is a "sofo" who is teaching to his son or very rarely to his daughter the secrets and the formulas of the cult and of the medicine preparation.
All around the courtyard, wooden signs with the names and the contacts of the voodoo priests and healers of the market, are hung at the entrance of the small metal shacks where clients enter in order to get personal rituals and charms, usually in front of small altars surrounded by bottles and bowls of incomprehensible ingredients.
When a local client or a tourist enters the gate, every dealer starts to scream in order to attract him to his stand, full of voodoo components and sometimes sculptures and handcrafted traditional goods, more suitable for tourists.

We have a quite negative vision of voodoo, fomented by stereotypes and wrong interpretations that, since the colonial period, have been diffused by western people and especially missionaries in order to increase and legitimate the conversions from animism to christianity. Their obsession for raw materials and their value overshadowed the social and invisible values of fetishes, highlighting instead their illusory material character.

Here at the market, everyone explains to me that voodoo offers protection and luck while witchcraft is always accomplished in order to produce evil effects and this is why most voodoo practices aim at seeking protection from it.
As a result of it, even if the 30% the Togolese population converted to Christianity and the 20% is Muslim, almost everyone in the country cures his body and his spirit with traditional voodoo medicine, whose ingredients you can find here, at the Akodessawa market.

Dried chameleons and starfishes together with the heads of parrots are ground into powder and mixed with honey in order to get a medication that, if taken everyday, strengthens intelligence and memory.

Cats and owls, once pulverized and mixed with blood, are used to make vaccinations against witchcraft.

Skins of crocodiles, snakes, lions, leopards and other animals are macerated in liquor in order to get a potion to drink to gain protections against black magic.

Snakes are used generally to protect newborns. Teeth of vipers, once pulverized, are injected in the body in order to get protection from snake bites.

Dried lizards are used in order to produce love charms.

Spikes of porcupines are used in order to make small scars on the body that protect from witchcraft.

Horns are used during celebrations in order to produce sounds, blowing into them.

Tortoise shells and legs are ground into powder and used to make medications for asthma.