I grew up in a small town called Helsingborg in Sweden, but i'm currently living in Paris. It's where I work best by far and a city I love! 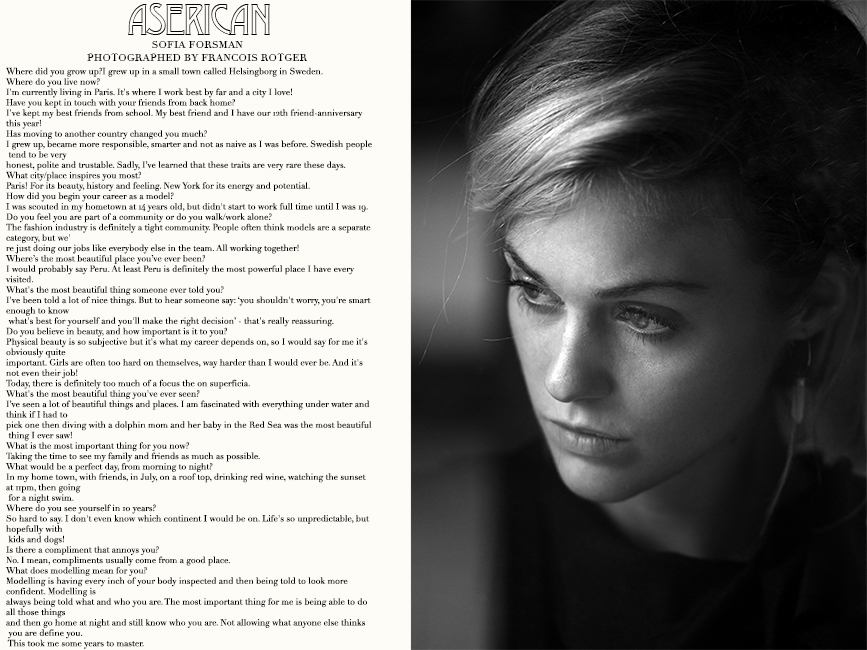 Where did you grow up?
I grew up in a small town called Helsingborg in Sweden.

Where do you live now?
I'm currently living in Paris. It's where I work best by far and a city I love!

Has moving to another country changed you much?
I grew up, became more responsible, smarter and not as naive as I was before. Swedish people tend to be very honest, polite and trustable. Sadly, I’ve learned that these traits are very rare these days.

What city/place inspires you most?
Paris! For its beauty, history and feeling. New York for its energy and potential.

How did you begin your career as a model?
I was scouted in my hometown at 14 years old, but didn't start to work full time until I was 19.

Do you feel you are part of a community or do you walk/work alone?
The fashion industry is definitely a tight community. People often think models are a separate category, but we're just doing our jobs like everybody else in the team. All working together!

Where’s the most beautiful place you’ve ever been?
I would probably say Peru. At least Peru is definitely the most powerful place I have every visited.

What's the most beautiful thing someone ever told you?
I've been told a lot of nice things. But to hear someone say: ‘you shouldn't worry, you're smart enough to know what's best for yourself and you'll make the right decision’ - that's really reassuring.

Do you believe in beauty, and how important is it to you?
Physical beauty is so subjective but it's what my career depends on, so I would say for me it's obviously quite important. Girls are often too hard on themselves, way harder than I would ever be. And it's not even their job! Today, there is definitely too much of a focus the on superficia.

What is the most important thing for you now?
Taking the time to see my family and friends as much as possible.

What would be a perfect day, from morning to night?
In my home town, with friends, in July, on a roof top, drinking red wine, watching the sunset at 11pm, then going for a night swim.

Where do you see yourself in 10 years?
So hard to say. I don't even know which continent I would be on. Life's so unpredictable, but hopefully with kids and dogs!

Is there a compliment that annoys you?
No. I mean, compliments usually come from a good place.
What does modelling mean for you?
Modelling is having every inch of your body inspected and then being told to look more confident. Modelling is always being told what and who you are. The most important thing for me is being able to do all those things and then go home at night and still know who you are. Not allowing what anyone else thinks you are define you. This took me some years to master.